There are a lot of angles you can hit the movie at if you’re a die-hard fan of J.R.R. Tolkien’s works. 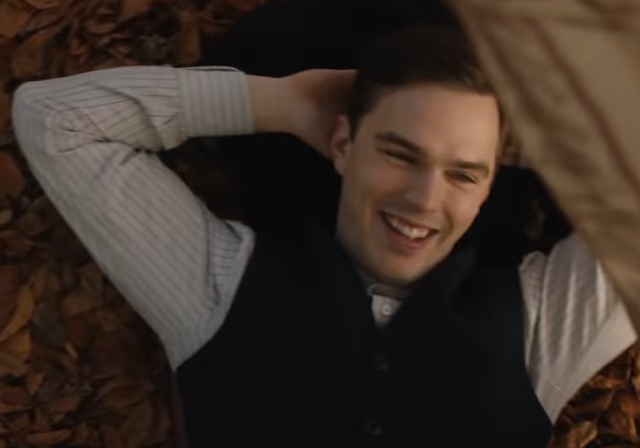 If you’re exhausted between the enormous blockbuster pomposity of Avengers: Endgame and the prospect of having your children drag you to see Detective Pikachu, you may be relieved to find out that there is some good counter-programming running in the adjacent theater that you can sneak into.

I went into Tolkien hoping for a lightweight drama to help ease the exhaustion from the blockbuster season and that’s basically what I got. Alas, that’s all the movie really had to give me. It was a cozy, two-hour breather with some occasionally subtle references to Middle Earth lore but it was little more than that.

There are a lot of angles you can hit the movie at if you’re a die-hard fan of J.R.R. Tolkien’s works. It’s a very brief view into the life of an author and a scholar who lived a long full life that boils it’s characterization down into a few beats mostly to appeal to people who don’t have a deep understanding of the man’s life.

A lot of critics of the film have zeroed in on its lackadaisical portrayal of Catholicism as a mere footnote in his life as opposed to his obsession with language and philology. Tolkien’s influences were many. His lifelong romance with his wife Edith, his traumatic service during World War 1, the tragic loss of his parents at a young age, his friendship with fellow Oxford scholars like C.S. Lewis, his love of epic literature like Beowulf and Norse mythology, his Catholic faith as well as his love of language shaped his intellectual and artistic soul to put him in the place where he could write a book series with the breadth and moral complexity of his Middle Earth books. Religion’s most prominent role in the story is as an excuse for his priest to keep him from getting married.

To quote Father Michael Ward at the Catholic Herald,

“This handsome, earnest, yet overstuffed and poorly paced film deviates frequently from the historical record. Most seriously, it ignores Tolkien’s devout Christian faith: there is no indication that he served Mass daily as a boy or ever even entered a Catholic church. His punch-ups with Wiseman and drunken night-time profanities are, in comparison, unimportant inventions.” 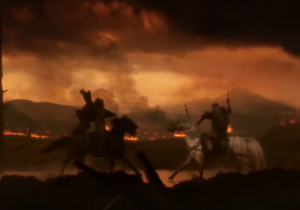 The name of the game in regards to Tolkien is shallow. This is a beginners lesson on the life of J.R.R. Tolkien that anyone could better understand by reading Letters from J.R.R. Tolkien where he explains the literal meaning of his writing endeavors. Egregiously, the movie ends the moment he sits down to start working on The Hobbit.

It strides past the bitter moments later in his life that served as his inspiration for writing The Lord of the Rings and The Silmarillion (which was published posthumously by his son Christopher Tolkien and is widely considered his masterpiece despite relatively low sales). We don’t get to see how he thought through the process of writing his books. We don’t meet the Inklings. We don’t see Edith die late in his life. There’s a lot of his life left out of the movie.

At it’s best, it squeezes more subtle references about his life in as random lines of dialog. Sometimes this is neat like the scene where he has an entire conversation about the phrase “Cellar Door” which he considered to be the most beautiful pairing of words in the English language. The best of these scenes come in the middle of the film when he starts having deep discussions on language with his Oxford professor Joseph Wright (Derek Jacobi). At other times he’s drunkenly rambling literature references.

All we really get are some fun scenes where a young Tolkien, portrayed by the very talented Nicholas Hoult, hangs out with his primary school and college buddies, gets drunk, falls in love and goes to war. Evidently, a great deal of this is apocryphal. At it’s worst, the movie feathers in trite references to Middle Earth to suggest without subtly that THIS IS WHERE THAT FAMOUS SCENE IN LORD OF THE RINGS COMES FROM. These scenes lack inspiration.

I won’t deny enjoying the film but I also won’t begrudge anyone with an investment in the life of J.R.R. Tolkien despising the film. It’s mostly enjoyable as a film for what it isn’t. It’s not a bombastic Hollywood blockbuster. It’s two hours of light drinking and hanging out with a “fellowship” of smart young men. Maybe that does sound appealing right now but it won’t make for a movie that stays in your memory. 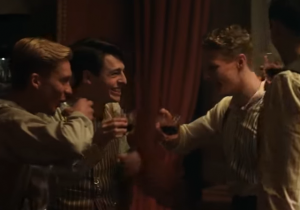 I thought about going to the cinema to watch this one. After I heard about how poorly done it is, I changed my mind.

It would have been nice to see how Tolkien and his Edith fell in love and kept it going for the rest of their lives. It would have been fitting for us: we were celebrating last weekend our twenty-fourth wedding anniversary.

Apparently, lifetime-lasting romances don’t get any respect nowadays. Too bad, so sad.

We made it a Greek dinner night instead.

On the contrary, the growth of his love for Edith was one of the few things NOT left out of the BioFlick.
I saw it, as a fan I enjoyed it, but it was basically an expurgated version of his Bio, concentrating on scenes from his childhood, (high) school, college, and threw in his nightmarish experience with trench fever in WW I.

It implied that trench fever served as the source for his Middle Earth battles (very arguably false), skipped over his Catholicism almost entirely (not PC?), never covered the Inklings at all – very arguably the most important influence of his final works, and ended with a “happily ever after” scene showing him and Edith and children, and him starting writing The Hobbit.

So, yes, there is a lot to hate about the film, but it was good enuf to evoke tears more than once, so it wasn’t a complete dud.

Ignoring Tolkien’s Catholic roots in his bio is like doing a film about Patton and not mentioning that he served in the Army.

Yawn. Wake me if someone decides to make the Silmarillion into a series of movies.

No, scratch that. In the hands of #Resistance-era Progressive Hollywood I shudder to think what a “woke” Silmarillion would look like. The DC and Marvel comic book movies already stink enough as it is.

Don’t look now, but AmazonPrime is doing a Second Age of Middle Earth series this year….

You can find an illustration online of an iceberg viewed from the waterline. The part of the berg above the surface of the water is labeled “The Lord of the Rings,” the part below the surface “The Silmarillion.” A better description of the difference between the two works I cannot imagine. (I’ve read the former at least a dozen times and the latter 6 or 7. The LOTR has the lead because I first read it in 1975 after seeing the LOTR calendar illustrated by Tim Kirk. Kirk’s illustrations made me curious about Tolkien’s world.)

Tolkien was an ancient language scholar and struggled to make sure this line of study did not disappear. Sadly, it has.

I thought this was an outstanding movie. I had to endure preview after preview of comic book foolishness just to get to the movie, so when we finally got there it was as if I had just left a room of juveniles and entered the adult room.

I am well aware of Tolkien’s faith and hold it up as a beacon to others. But I did not find one thing that attacked his faith. As a matter of fact I saw a college age man surrounded by college temptations actually standing up as a man of faith and loyalty.

Why we would put down Tolkien’s heroism risking his own life for a friend is beyond me. Can’t we leave the world of aggrievement for a moment and just enjoy a great movie?

So skip this movie and re-read the books. Then read “Bored Of The Rings” by the Harvard Lampoon. If you are a baby-boomer like me you will laugh your a** off.