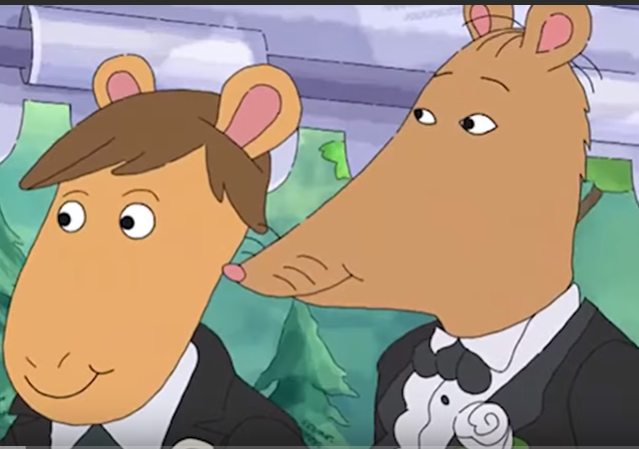 The PBS cartoon Arthur is shockingly entering its 22nd season as one of the longest continuously running children’s shows on television. For those of you who didn’t grow up with it or aren’t being forced to watch PBS Kids regularly, the show is effectively a series of moral lessons about a group of kids growing up and handling different life events such as bullying, medical problems, friends moving away and how to deal with them. It’s a very gentle show and appropriate viewing material for young children.

That’s what’s made its recent premiere so surprising to a lot of people. In the season premiere episode, Mr. Ratburn and the special someone, the children in the show attend their 3rd-grade teacher’s wedding to discover that he’s marrying another man. The show’s reveal has been widely embraced by progressive media as a huge step forward in the continued representation of LGBTQ+ characters in popular media.

I am curious as to what is rooting the decision from a creative standpoint. Usually, decisions like this are made for more cynical reasons for normalizing progressive norms in children at a young age. Usually, this takes the form of extremely cynical methods (IE: Captain Planet‘s diverse cast of one child of every race) or as we’ve seen with the pernicious and heavily sexualized web series Queer Kids Stuff which teach more advanced and worrying sexual concepts to young children. The left understands the value of inculcating children at a young age to de-fang traditional notions of gender which they fear contribute to sexism/racism/homophobia/etc.

A parent who watched the episode yesterday evening and contacted LifeSiteNews and contrasted the reactions to the cartoon characters to those of her children.

“The [cartoon] children are a bit surprised but mostly nonchalant about the whole thing,” she wrote from Topeka, Kansas. “Needless to say, in the real world, our children were shocked and confused.”

Arthur is a pretty tame show, all things considered. Mr. Ratburn is an already established character so it’s unlikely the show is going to flaunt this and alter his character radically to pander. The reveal itself is also quite understated and doesn’t flaunt the character’s evident sexual orientation as a big deal.

Ultimately, when it comes to matters of sexuality, particularly the education of young children, the decision of how and when to discuss these things is up to parents, not broad culture or PBS. It’s that encroachment that upsets most parents more than the content itself.

Fun Fact: Louder With Crowder’s Steven Crowder, a conservative comedian, and late-night host voiced the Brain on Arthur for several years as a child actor

I always find it a little offensive when smarmy untalented douchebags deem to instruct me on how to treat other people.

This is how we raise a generation of morally smug, sanctimonius ignoramus – Thomas Sowell, I’m sure if it.

“Usually, decisions like this are made for more cynical reasons for normalizing progressive norms in children at a young age.”

Uh …. that is EXACTLY what is happening here. I don’t see how it could possibly be more cynical and manipulative without becoming a self-parody.

Letting your kids watch this junk is like letting them read Playboy while making them skip past the, er, interesting parts. Good luck with that approach! Maybe the producers need to become acquainted with the concept of “Get Woke Go Broke.”

Tell me again why I’m forced to subsidize this network with my tax dollars??

Seriously. In a nation with 500 channels of ‘nothing is worth watching tonight,’ why is there any public media corporations?

Well I’ve seen the show some over the years, babysitting for family and whatnot so I’m familiar with the character. I knew he was a bachelor, before this anyways, and Arthur’s teacher and a fairly good one at that. The thing that really gets me is that I don’t recall seeing anything that told me that he was gay, closeted or otherwise. Could be I just missed important little clues along the way but this definitely feels like what some are calling it: hardcore pandering and trying to normalize same sex marriage to minors.

Forgot to mention: I did not know that about Crowder. Interesting fun fact!

Do we get to watch the honeymoon night scenes?

There was no need to include this in a children’s program.
None. It’s especially galling that is was a program that parents trusted and felt secure in letting their children watch due to past history- to have this thrown in all of the sudden.
It’s just an in-your-face smack.

Democrat – Media – Hollywood Cabal – All your kids are ours – Submit!

Wait until they try to explain “felching” to our little children.