“We have to inoculate against that, we have to be prepared for that” 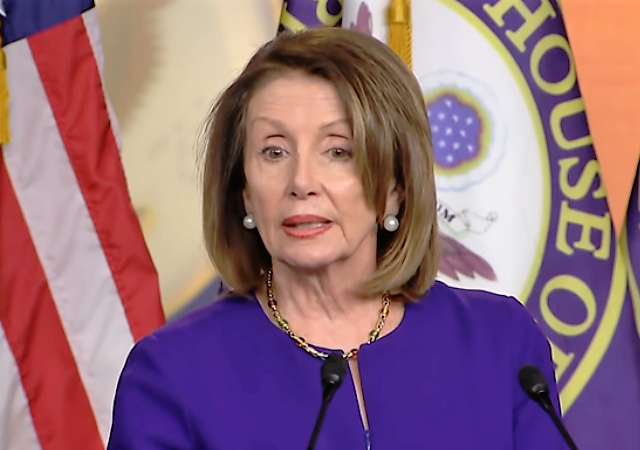 It’s another classic case of projection.

Pelosi Warns Democrats: Stay in the Center or Trump May Contest Election Results

Speaker Nancy Pelosi does not believe President Trump can be removed through impeachment — the only way to do it, she said this week, is to defeat him in 2020 by a margin so “big” he cannot challenge the legitimacy of a Democratic victory.

That is something she worries about.

“We have to inoculate against that, we have to be prepared for that,” Ms. Pelosi said during an interview at the Capitol on Wednesday as she discussed her concern that Mr. Trump would not give up power voluntarily if he lost re-election by a slim margin next year.

Sitting in her office with its panoramic view of the National Mall, Ms. Pelosi — the de facto head of the Democratic Party until a presidential nominee is selected in 2020 — offered Democrats her “coldblooded” plan for decisively ridding themselves of Mr. Trump: Do not get dragged into a protracted impeachment bid that will ultimately get crushed in the Republican-controlled Senate, and do not risk alienating the moderate voters who flocked to the party in 2018 by drifting too far to the left.

How exactly does Pelosi think Democrats are going to appeal to the mainstream? Democrats are currently calling for the abolishment of ICE and the Electoral College. Some of them want to spend trillions fighting climate change and others want to destroy private health insurance. Is that the middle?

Here’s one more question for Ms. Pelosi, regarding accepting the outcome of elections. Has she ever heard of Stacey Abrams?

Okay, so remember when Donald Trump said, half-jokingly, that he would accept the 2016 results…if he wins? The media went has a spastic attack, Trump was a threat to the country, a threat to our institution, but it’s okay; Hillary was going to win. Well, that blew up in their faces.

So, what happens when the Democrats do it? There’s a deafening silence. It’s expected. But failed Democratic Georgia gubernatorial candidate Stacey Abrams has become the gold standard when it comes to the Left throwing a tantrum over election losses. She says she didn’t lose, but in fact, “won” the race. That’s demonstrably false; she lost by more than 50,000 votes…

And alas, her latest episode of insanity when it comes to elections: the Left doesn’t need to concede anymore:

.@staceyabrams giving defiant speech to @AnniesListTX, saying she won’t be a “good sport” & go away quietly after election in which she was wronged. “We don’t have to concede elections anymore, b/c when we concede, we are condoning systems that are used to oppress us,” she says.

Get back to us when your own house is in order, Democrats.

Typical. Whatever the progs are doing wrong they accuse the other side of doing.

They’re all communists and they care nothing about the truth, freedom, or liberty.

They’re getting the narrative in place for when they get caught cheating, again

Good Grief ! Why should her re-election be accepted?

The Dims will use anything at all, no matter how small to try to embarrass the President hoping for some sort of electoral blowout in their favor.

Their projector is big enough to run a drive-in theater.

And what about the gapped-toothed, overweight, member of Meal Team Six Stacey Abrams who still hasn’t acknowledged her bona fide loss in the GA governor race?

I hear that Hillary and the D’Rats want the 2020 election judged by Kentucky horse racing rules.

they not accept the results of 2015, they still think algore and Lurch should have been President instead of W.

This is all a set-up to justify the Dems [and libs] taking extra-legal action when their attempts at disenfranchisement and outright voter fraud are uncovered.

Look, the Dems are prepared to go full Monte on voter fraud, 2018 was a dry run for them. They fell short in 2016 and the fly-0ver states carried Trump to victory. But, they were already floating the same narrative, if their illegal actions were uncovered and HRC had been elected. So, every underhanded and illegal vote gaining method will be employed by the Dems in 2020. And, if they are discovered and Trump loses, the election will be contested b y a large percentage of the populous.

People had better be prepared for huge irregularities and vote fraud in 2020.

California is their “how to” example for the nation. Fraud via “ballot harvesting” is why Orange County was flipped. Elections are “elections” only in the Soviet sense anymore.

Buy guns and ammo if you want to keep your freedom.

There may have been fraud in the ballot harvesting in Orange County. Since we are talking about the Dems, it’s reasonable to suspect that there was fraud. But there is no actual evidence for this. The result in Orange County can be explained simply by the fact that the Dems harvested ballots and the Reps didn’t bother. When that happens what do you expect?

There is nothing fraudulent or dishonest about harvesting ballots, where legal. It’s a bad idea to make it legal, because it’s so easy for people to cheat on it, by pretending to harvest the other side’s ballots and instead throwing them away. Even if the Dems didn’t do that this time, there’s nothing to stop them doing it next time. But it’s the Reps’ job to go out and harvest their own ballots, and when they neglect to do so you can’t blame the Dems.

The same old tune as before the 2016 Election.

The Democrats’ needle is stuck.

The Democrats’ needle is stuck.

That’s because the Dems are scratchin’ their record over a funky beat…..