From Arafat to the present, that Palestinian leadership would describe women’s wombs as weapons shows depravity. 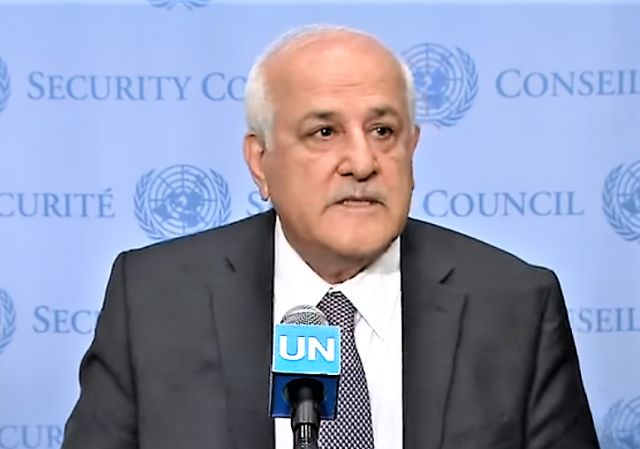 “the womb of the Arab woman is my strongest weapon”

(Alternatively translated as “my best weapon”).

Arafat’s proposed demographic time bomb never materialized, and may have been overstated all along. Regardless, that Palestinian leadership would describe women’s wombs as weapons showed depravity.

It’s a sick statement to make, but it continues to drive the thinking of Palestinian officials, as was just made clear by Palestinian Authority UN Ambassador Riyad Mansour.

Numerous news agencies reported on Mansour’s recent comments regarding Trump’s not-yet-released peace deal. There is a lot of speculation that the deal will not propose an immediate Palestinian state, but some other configuration.

Mansour threatened that if that was the case, Palestinians would ignite a demographic approach.

The Palestinians are asking the European Union to pick up the mantle in defense of the two-state solution if the upcoming US peace plan ditches Palestinian statehood, their UN envoy said Tuesday….

Palestinian Authority ambassador Riyad Mansour told reporters that he urged European officials during recent meetings in Brussels to seize the initiative and not allow the United States to be the preeminent player in the Middle East peace process.,,,

Mansour said US actions — including recognizing Jerusalem as Israel’s capital and cutting all funding for Palestinian refugees — and Netanyahu’s threat to annex Israeli settlements in the West Bank will not solve the decades-long conflict and lead to peace.

“Some in the (US) administration think, yes, what will help peace is break the legs of the Palestinians and one arm, and five teeth … and when they are on their faces on the ground crawling, they will come crawling to you for anything that you can offer them,” Mansour said.

The US peace plan, which Mansour said he has not seen, is expected to feature proposals for regional economic development that would include Egypt, Jordan and Lebanon but the Palestinians have been adamant that it will fail….

Mansour said he was convinced that the Palestinians still enjoyed “massive support in the international arena,” but suggested that if diplomacy failed, the battle could then turn to demographics.

“If this is what they want to force on us — one-state reality — the Palestinian people will accelerate their reproduction machines and increase the number of Palestinians to face apartheid,” he said.

Nothing has changed from Arafat to the present.

The demographic reality is that Israel is now a Haredim Jewish state, not Arab. Israeli Haredim Total Fertility Rate – the number of children born per woman on average is 6.9 (Many Haredim women have 17-21 Children in Jerusalem) vs. the current falling Arab rate of 3.3 which is projected to decline to 2.6 by 2040 (http://www.israelnationalnews.com/News/News.aspx/216254). Your average Arab Woman living in the Land of Israel wants what everyone else has, “The Good Life” and will not be a slave to Hamas, Fatah(PA) or anyone else. They want to work in Israel and shop in the Malls. Wear Jeans and Go out. Just ride on a Jerusalem Bus daily and see.
Remember that an Muslim is required to lie to a non Muslim to advance Islam. They will say anything to get there way.

Detonated nuclear weapons do not care what the total population is in a given area.

The same is true for fuel air devices, a 1000′ radius circle can contain a few people or many thousands, and they are all converted to dust.

Personally, I think that israel should start using these devices to create a DMZ zone. They could start designating areas to be cleared, maybe even warning them a week ahead. Then follow up with bulldozers.

Use of nukes need to be far enough from Israel so that the EMP does not damage Israel.

I’m old school and think napalm is the bomb.

Whether you murder a people or simply breed them out of existence, they are both genocide.

Reproducing in excess of an economy’s ability to provide gainful employment is probably worse than genocide. I cannot understand how anyone can have anything except contempt for palestinians.

When the bacteria in a petri dish outgrow the resources available in that petri dish, the situation becomes self correcting.

Unfortunately, somebody in the lab feeds it, creating an even larger out of control situation.

Redefining the word “genocide” doesn’t make what Israel is doing wrong, any more than we assume “gay” people are necessarily happy and cheerful.

Send over Planned Parenthood: it’ll be worse than a nuke.

Since Israel is supplying free water to the palestinians, I think that they should add ample birth control hormones. That would make the men far less aggressive, and their reproductive machine would be stalled. About 35 years should correct most of the problem.

Israel supplying free anything is ridiculous given the no-win environment they’re in. They might as well hold onto every negotiating tool they have, including water. What, the world is going to starting hate them? The Jew-hating NY Times is suddenly going to print Jew-hating cartoon?

This is akin to giving the Nazis oil during WW2.

Let the crazy people look to their malignant leaders for water. They’ll get reality and come to their senses.

I am not sure I understand the threat. These vermin reproduce regardless of the consequences and regardless of their family desires. So he is saying they were moderating the vermin output for some unspecified period of time? And will not normalize the breeding of the vermin to …..what it is?
How does this make any sense? They are death cultists. This is what they do. Breed mentally suspect if not deficient progeny at will and try to destroy the host.

They teach their children murder. No form of depravity is beyond them.

They’ll have more of them to abuse.

Look, the warped leaders of this asylum aren’t much worse of child abusers than hollywood’s biggest stars:

The other half of the threat is that Europe will see the suffering Palestinian children, with their rising population, and accuse Israeli jews of committing genocide against the Palestinians — again, on the basis of the *rising* population of Palestinians.

Alas, this completely illogical argument is likely to be quite persuasive in Europe.

Even when the ambassador goes on TV and explains what they’re doing.

Another obama might get elected and import them to America.

In another 20 years, no one will be paying any attention to what Europe says.

We just need the Europeans to accept the Palestinians as refugees so they will stop murdering Jews.

It will not work, palestinians are doomed by their genetics and culture.

It’s hardly a secret that more than a few expect demographics and differential reproductive rates to finally settle the question of whether Israel is to remain a Jewish state.

How you gonna make those wombs bulletproof, Mansour?

Nobody wants to break their teeth. Just to transfer them safely (unless they fight and make safety impossible) out of the Promised Land to another location.

If the “invaders” don’t give in to our demands, from the Jordan to the sea, we’ll just multiply and overrun them (and enjoy ourselves while we do it: win-win).