What if Israel has no demographic time bomb?

What if Israel has no demographic time bomb?

A possibly fictional demographic time bomb is no reason to expose Israelis to real bombs. 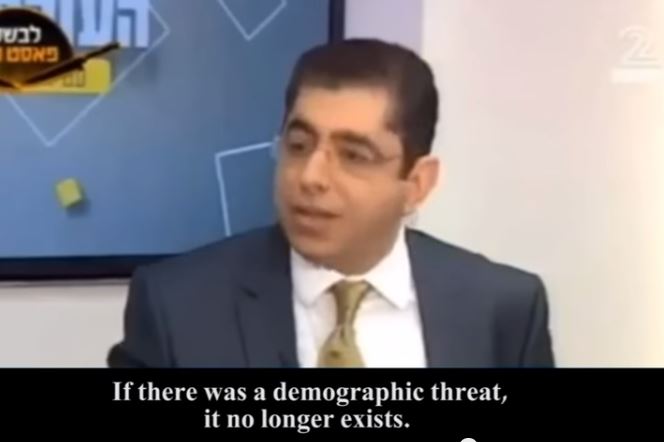 A central thesis in the standard approach to the Israeli-Palestinian negotiations is that Israel faced a demographic time bomb.

John Kerry used that claim as part of his assertion that Israel could become an “an apartheid state with second-class citizens—or it ends up being a state that destroys the capacity of Israel to be a Jewish state.…”

But what if it’s not true.

What if demographic trends favor the growth of Israel’s Jewish population relative to non-Jews, even if all or part of Judea and Samaria were to be annexed with citizenship extended to all?  That’s part of the thesis in Caroline Glick’s new book, The Israeli Solution: A One-State Plan for Peace in the Middle East.

Although I don’t hold myself out as having any expertise in demographics, I have been following what demographic experts have been saying for years.  Back in 2011 I posted Israel – Demographic Superpower:

There are other reasons why Israel should reach a territorial compromise in the West Bank, but the demographic threat is not the first among them.

Going beyond that, Israel may actually be the demographic superpower in the region. So argues this article, Israel as Middle Eastern hegemon:

Like the vanishing point in a perspective painting, long-term projections help us order our perceptions of what we see in front of us today. Here’s one to think about, fresh from the just-released update of the United Nations’ population forecasts: At constant fertility, Israel will have more young people by the end of this century than either Turkey or Iran, and more than German, Italy or Spain.

Sorry, but the real number of Arab Israelis isn’t an existential threat to the Jewish state.

….The argument, in a nutshell, goes like this: The birth rate among Arab families in Israel and Palestine is higher than it is for Jewish families. Therefore, at some point in the future the Arabs will become a majority in the area Israel occupies. When that day comes, Israelis will have to choose between having a Jewish state or a democratic one, because giving every person an equal vote would mean losing the Jewish character of the state. Israel’s only hope of maintaining its identity, proponents of the “demographic time bomb” theory would argue, is to soon cut a peace deal that paves the way for an independent Palestinian state.

There’s only one problem: The numbers just don’t add up. Demography relies on more than just birth rates, and similar predictions have a long history of falling flat. Israeli Jews have a healthy and largely stable demographic majority in Israel and the West Bank, and developments in the coming years may even enhance this trend. The demographic time bomb, in other words, is a dud.

Part of the problem is whether demographic statistics for non-Jews in Judea and Samaria are inflated, as this Haaretz article noted in June 2013, How many Palestinians actually live in the West Bank?

However, over the past few years, a fierce battle has taken place over the number of Palestinians living in the territories.

The American-Israel Demographic Research Group has been trying for eight years to prove that the Palestinians have managed, with great sophistication, to inflate their true population by 1 million people, and that the real figure currently stands at about 1.5 million people.

The group’s claims are not corroborated by demographic experts in Israel and around the world, but Israeli right-wing activists and politicians have adopted them…

The group published its first paper in 2005 in what was seen as a move to block the Gaza pullout by disputing the accepted demographic figures. The paper contests the Palestinian Authority’s censuses of both 1997 and 2007.

These censuses were the only ones held in the West Bank and Gaza since 1967 and were supervised by the Norwegian government. Based on these studies and figures from the Palestinians, the Israel Defense Forces, the United Nations and the Shin Bet security service, the Palestinian population in the West Bank is usually estimated at between 2.6 million and 2.7 million.

But according to the American-Israeli group these numbers are distorted. First, the group says these numbers include 300,000 Arab residents of East Jerusalem, which Israel counts as Israeli Arabs. Second, the group says Palestinian demographers include people who left the West Bank many years ago. Third, it says figures for population growth don’t jibe.

“These are not necessarily lies,” Ettinger said. “But the Palestinians count differently. The problem isn’t them; the problem is with those who accept their data without checking. For example, in the matter of the births there’s a very imprecise fact there, to say the least.”

Professors at the University of Haifa have published projections for Israel: Demography 2013-3034 (pdf.) which takes a less optimistic view assuming annexation of all of Judea and Samaria:

I don’t know who’s right, but the argument that there is no demographic time bomb also is laid out in another presentation just last month, Expert: Israel Does Not Face a Demographic Threat,

Successive Israeli governments have accepted that the best solution for Israel is a two-state solution, assuming one can be obtained in a manner consistent with Israeli’s long-term security.

The demographic dispute, therefore, is best seen as a rebuttal to arguments that Israel needs a two-state solution regardless of the security consequences because it otherwise faces a demographic time bomb.

Arab and Iranian birthrates are tumbling. Tehran recently saw the biggest drop in birthrates ever measured. And in the industrialized world only Observant Jews and Evangelical Christians have a positive birthrate.

In 40 years – Israel will have more military aged men than Germany. (WOW) And, most of them will be Observant Jews.

It’s amazing to me how Israel manages to sustain a pro-natal culture. Quite a few of my girlfriends who came to Israel from the Soviet Union, both Jewish and Slavic, ended up with 3 kids. Had they stayed, they’d probably had one.

Israel can ensure against the demographic time bomb by banning abortion.

It’s both a principle of evolution (i.e. natural law) and God’s prime directive to man:

Be fruitful and multiply and fill the earth and subdue it, and rule over the fish of the sea and over the fowl of the sky and over all the beasts that tread upon the earth.

There is a reason why the Left is pro-choice. The aristocracy cannot manage the population, and they can ill-afford another American or French revolution.

The issue of Middle East demographics was addressed as early as 2002 by Ben Wattenberg in an article in the WSJ entitled “Parents of Arabia” (http://archive.today/osqC3#selection-489.0-561.35)

…Truth is, fertility rates in Arab and Muslim countries have been falling rapidly in recent decades. Indeed, it would be remarkable were they not; it’s been happening everywhere else. Consider North Africa, using data from the United Nations Population Division. Forty years ago, the total fertility rate (number of children per woman) was 7.1. Today it is 3.1 and sinking like a stone. Egypt, the most populous Arab country, has seen its TFR plummet from 7.1 children per woman to just 2.9 today; Tunisia’s is 2.1, below the rate required to keep a population stable over time in a less developed country, and down by a child in just a decade.

Go East. Syrian fertility has fallen from 7.8 to 3.6. Lebanon: 6.4 to 2.2, about replacement level and sinking. From peak year to the present, here are some other numbers: Jordan dropped from eight to 4.3 children per woman; Iraq from 7.2 to 4.8; Saudi Arabia 7.3 to 5.4. The numbers are still high by Western standards, but they’re falling steadily.

Go further East. The incredible story is Iran, a theocratic and despotic Muslim country. At its peak, its TFR was seven children per woman. At a recent U.N. conference, an Iranian demographer delivered a paper which calculated the current TFR at 2.06 and falling. Like Iran, the most populous Muslim countries are not Arab. Nearly all—including Turkey, Bangladesh and Indonesia—have also seen major declines in fertility, only Pakistan remains high.

…The bottom line is that the demographic situation for the Jews of Israel is not nearly as bleak as it is sometimes portrayed. The Jewish Israeli TFR is about 2.7 children per woman. It has come down some but it remains the highest of any modern country, the only one seriously above the replacement rate, and about twice the rate for Jews in the rest of the world.

Wattenberg wrote this 12 years ago.
Eventually, someone is bound to listen, no?