“Many of us have been together at Occupy Wall Street, and at Black Lives Matter protests, and against that fascist in the White House” 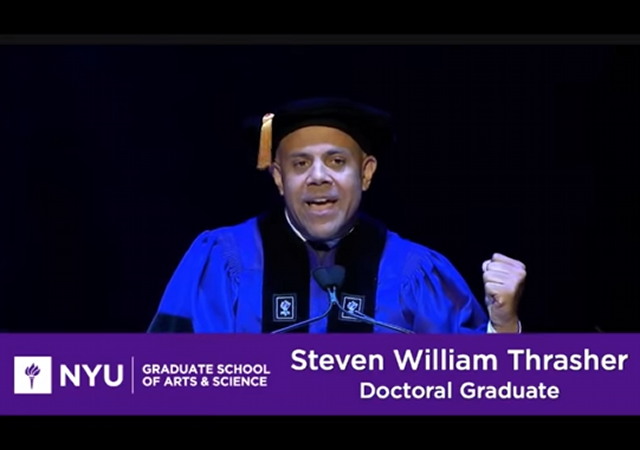 A graduation speaker at New York University called President Donald Trump a “fascist,” described Israel as an “apartheid” state, endorsed the Boycott, Divestment, and Sanctions (BDS) movement, and praised Occupy Wall Street in a two-minute excerpt from his Monday speech.

Speaking at the convocation ceremony for NYU’s Graduate School of Arts and Sciences, Steven William Thrasher praised his fellow doctoral graduates for their fight against the various perceived evils.

“Many of us have been together at Occupy Wall Street, and at Black Lives Matter protests, and against that fascist in the White House,” Thrasher said to cheers.

When the applause quieted, Thrasher took aim at Israel, which hosts the largest pro-gay “Pride Parade” in the Middle East.

“I am so proud, so proud, of NYU’s chapters of Students for Justice in Palestine and Jewish Voices for Peace,” he said, “for supporting the Boycott, Divestment, and Sanctions movement against the apartheid state government in Israel.”

Guy Benson of Townhall notes that Thrasher’s remarks will trouble you even more when you consider that he will teach journalism:

In many ways, this qualifies as a ‘dog bites man’ story. Here we have a professor of journalism — focusing on “social justice” reporting and “issues relevant to the LGBT community” — living down to a hackneyed caricature by delivering a shrill, lazy left-wing diatribe to graduates during a commencement address.

The incoming faculty member at my alma mater, Northwestern’s Medill school, called President Trump a “fascist,” and applauded students fighting to boycott Israel during the convocation ceremony for an NYU’s graduate program. These comments are unremarkable in the sense that they’re simply the latest example of paint-by-numbers campus leftism. But they were offered by someone whose job description presumably entails teaching future reporters, raising questions about when the line between actual journalism and naked ideological activism ceases to exist.

As you can probably imagine, some people in the audience found Thrasher’s remarks troubling.

“I found it quite objectionable that the student speaker chose to make use of the Graduate School of Arts and Science doctoral graduation to express his personal viewpoints on BDS and related matters, language he excluded from the version of the speech he had submitted before the ceremony. We are sorry that the audience had to experience these inappropriate remarks. A graduation should be a shared, inclusive event; the speaker’s words – one-sided and tendentious – indefensibly made some in the audience feel unwelcome and excluded.

“Let me use this occasion to reaffirm the University’s position – NYU rejects academic boycotts of Israel, rejects calls to close its Tel Aviv campus, and denounces efforts to ostracize or exclude those in the University community based on their location in Israel, their Israeli origin, or their political feelings for Israel.”

The president and provost of Northwestern University in Illinois affirmed that the school “unequivocally rejects” the Palestinian-led boycott, divestment, and sanctions (BDS) campaign against Israel, which an incoming professor at the school endorsed while giving a commencement address at New York University.

Steven Thrasher — a graduate of NYU’s Department of Social and Cultural Analysis (SCA), which recently pledged non-cooperation with NYU’s Tel Aviv campus — used a portion of his speech at the doctoral convocation ceremony last Monday to applaud NYU anti-Zionist groups and his SCA colleagues for supporting BDS “against the apartheid state government in Israel.”

He is expected to officially take up his position as assistant professor of journalism and inaugural Daniel H. Renberg Chair on social justice and LGBTQ media studies at Northwestern’s Medill School of Journalism on June 1.

It’s rather telling that Thrasher felt so comfortable making such inflammatory statements so openly. It reinforces the notion that the left knows it owns academia.

At least academe provides some function by keeping idiotic mediocrities like this penned off and away from sharp objects.

Personally, I think he should be given all sorts of sharp objects, allowing evolution to finally do its thing.

notamemberofanyorganizedpolicital in reply to JusticeDelivered. | May 31, 2019 at 3:22 pm

Doctoral graduate, can’t research a dictionary to know what an actual fascist is…

This leftist POS should also look up the meaning of “dickhead”, as he’s going to called one by many.

INTERESTING to watch him freak out after some Muslim walks up to him on the street, sticking him 20 times with a sharp knife.

Such an event could as easily be one of his fellows, although they would be more likely to use a stolen gun.

I remember when there were standards for getting a PhD. Clearly not anymore.

Apologies for he accidental down vote.

Apparently he got his PhD in ignorance and hate.

It’s sad. Even when I got mine, I was shocked to see the low to non-existent standards for some candidates, especially those doing race/gender-bender theory topics. The study of history has pretty much been destroyed by whackademia. I got away just in time.

I’m sure it was some studies [email protected]

Virginia, there are not. Even STEM has been contaminated by political thought substituting for knowledge. “Climate science” and “Environmental Studies” are less about astrophysics/statistics/meteorology/thermodynamics (as planetary climate was once understood) or biology/zoology/botany (environment), and more about the need for socialism.

All science will be viewed through the prism of progressivism. Lysenko is the father of modern scientific theory.

How did this POS get on the stage in the first place?

He is described as a “student speaker” so I would guess some sort of vote by the students. I would like to see a video of the crowd while he was speaking. There was certainly some cheering by a portion of the audience but I bet the A&S School is pretty big at NYU so it would be interesting to see how many people were sitting on their hands.

Note that this vile, odious and self-congratulatory SJW jackboot and twit, Steven Thrasher — who presents himself as a card-carrying member of the LGBT movement — like so many of his intellectually dishonest, morally bankrupt, feckless, Islam-whitewashing and Islam-fetishizing brethren on the Left, doesn’t possess the moral probity and factual honesty to acknowledge that, in the Middle East, only in Israel are gay people free from persecution and worse, while, in any of the Arab Islamic countries, they’d be arrested, beaten or executed on the spot, courtesy of the Muslim adherents of the enlightened, benevolent and tolerant ideology of “Submission,” which Leftists seem intent on romanticizing and whitewashing of its innumerable and intrinsic pathologies.

Congrats, Mom and Dad, this is your child of tomorrow.
Barf.

Piled Higher… or Push Here…. an aspiration to a future achievement.

So, let’s review. Obama spied, Clinton colluded, Biden obstructed, DNC denied, and the press prosecuted a multi-trimester cover-up. Obama is in progress to become the Nixon of Liberals’ hopes and dreams.

Still, there is a possibility, if ever so small and progressive, that Trump is indeed a warlock, perhaps a witch. That said, then there is the allegation of fascism or conspiracy of minority public and private interests. Maybe, if not in words, then in actions. Time will tell.

Ahh, Affirmative Action on display for all to see!

Apparently the NYU President feels it enough to tsk, tsk this man’s non-approved diatribe rather than impose any consequences.

What consequences could he impose?

At this point anyone or company who hires someone who graduated from with a degree from a school based in a Democrat-Socialist polity deserves what they get. And they will not be around very long.

Unless employment is found in Silicon Valley,
The graduate could be the next head of the newest (latest type of) diversity department.

I’d have stood up and walked out.

The alumni of NYU and Northwestern should stop contributing to these schools. This is the only way the administrations will change their tunes. I would have walked out, too. Jewish and pro-Israel prospective students should boycott these schools. There are better places to spend your parents money!!

Everyone, but especially Jews should stop supporting black causes. They should support people based on merit, and regardless of race kick those who lack merit to the curb. Society is carrying far too much dead weight.

And what is with the white Lone Ranger make-up. When he is unemployed next year, let’s all laugh at it.

A Day In the Life, take one.

For context’s sake, Dance of the Sugar Plum Fairy.

Yes, yes we’re all aware Democrats are the real racists. So, the Democrats have been the real racists since before reconstruction. Everyone knows it and it’s only wilful ignorance and historical revision that keeps blacks voting Democrat forever. That and naked hatred and greed. You could write nothing but articles about Democrat racism, degeneracy and greed and fill the blog 24/7.