Iran, EU Close to Signing Oil Deal Despite US Sanctions

Iran, EU Close to Signing Oil Deal Despite US Sanctions 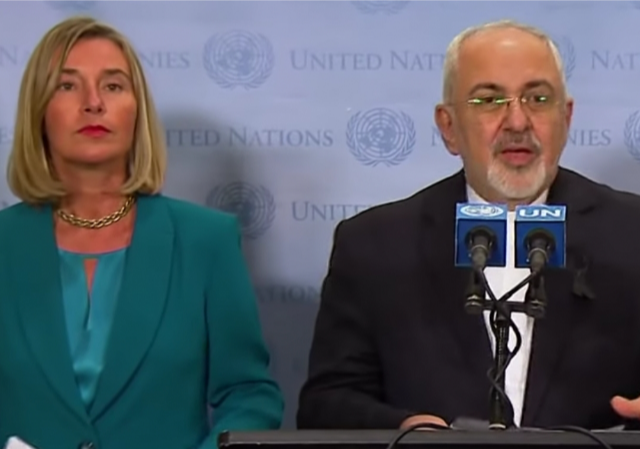 Iran is close to reaching an oil sales deal with the European Union, in direct violation of the U.S. sanctions, Reuters reported. The EU and Iran were “on the brink” of an oil agreement, Iranian Foreign Minister Mohammad Zarif confirmed Tuesday.

The news comes days after Britain and the EU came out openly against the Trump administration’s recent decision to restrict further waivers on oil imports from Tehran. Last week, European countries renewed their pledge to keep the Obama-era nuclear deal with the Islamic regime afloat despite the U.S. withdrawal exactly a year ago on May 8, 2018.

The EU along with the foreign ministers of Britain, France and Germany issued a joint statement expressing “concern” over the U.S. move “not to fully renew waivers for nuclear nonproliferation projects in the framework (or the 2015 Iran Deal).”

Iranian Foreign Minister Mohammad Javad Zarif told Russian news agency RIA on Tuesday that Iran was close to an oil sales deal with the European Union, despite the sanctions which have been re-imposed by the United States.

“Iran and the EU are on the brink of agreement, which, despite the return of unilateral American sanctions, will make Iranian oil sales possible,” he was quoted as saying.

The Iranian announcement coincides with the German government’s admission that the European payment mechanism designed to circumvent U.S. sanction was nearing completion. “Currently, the last steps need to be taken for this corporation to be able to operate – that includes Iran making the necessary preparations on its side,” Chancellor Angela Merkel’s personal spokesman disclosed at a regular news conference Wednesday.

The EU-backed payment system called Instex, will act as a barter system offsetting Tehran’s oil exports against imports from European states. The mechanism will eliminate the incriminating money trail and shield sanction-busting European companies from prosecution under the U.S. law.

The U.S. sees Instex as a tool for money laundering and financing terrorism — especially in light of the role played by regime’s Islamic Revolutionary Guard Corps (IRGC), a designated terrorist group, in key sectors of the Iranian economy. “I question how that’s even remotely possible … with a country like Iran where the IRGC is so endemic within the economy but also hidden in many different respects,” U.S. Treasury Under Secretary for Terrorism and Financial Intelligence Sigal Mandelker said Tuesday.

If the announced EU-Iran deal is realized, it may end up funneling millions of euros into IRGC-run security apparatus that suppresses domestic opposition and finances foreign terrorist organisations such as Hamas and Hezbollah.

The sanctions imposed by the White House have battered the Iranian state-controlled economy. The currency has lost more than two-thirds of its value since the sanctions were slapped back last year. This has led to wide-spread anti-regime protests, including in the capital city of Tehran, only to be brutally suppressed by the security forces loyal to the Islamist regime. A possible oil deal with the Europeans will only embolden the regime to quell dissent at home and seek military adventure abroad.

notamemberofanyorganizedpolicital in reply to Valerie. | May 8, 2019 at 6:55 pm

Methinks the PU and Iran will soon be “sighing” for another but very bad reason very soon now.

As goods shipped to Iran have to be manufactured somewhere and oil from Iran has to be sold somewhere, it is relatively easy to impose the sanctions onto producers of goods going to Iran and companies obtaining oil from Iran. Instex is a company obviously set up for the sole purpose of creating a fiction that goods producers and oil buyers are NOT dealing with Iran, in violation of US imposed sanctions. We’ll see what happens if the US enforces those sanctions on European companies dealing with Instex.

Sounds like the real target may turn out to be the US dollar.

So, Libya did not quench their thirst. And, of course, the imperative to sustain the green collusion with China, India, etc.

We need to pull our troops out of Germany.

It is foolish to fund their defense while they turn around and fund our enemies.

No reason to have them there anymore, anyway. If anything, they should be in Poland and Slovakia.

…or better yet, home.

Deployed about 100 meters south of the Mexican border.

It looks like the Germans are up to their old tricks again. This would not even be considered if not for Queen Merkel’s blessing. They have already signed a pact with Russia. Sound familiar? The only good news is that the German army/air force/navy are in shambles and there is no threat from that quarter. But economically, Germany is ruling the EU and dictates the immigration policies of all the others. If this sanction breaking takes place, look for Trump to start withdrawals of American forces from Germany. It will be a wake-up call for them when they find out what it actually cost to provide their own protection.

Every other administration would let them get away with this. But, I don’t think Trump enjoys eating shit. Even German shit.

The EU is neither a colony or in some other way being subordinate to the USA. Their collective GDP is larger than ours at times.

The USA can sanction anyone they want, including the EU if they don’t dance to our tune, but they aren’t our servants or slaves.

When you argue “In violation of US Sanctions” – I can simply shrug. They are US not EU sanctions.

Beyond that, China and Saudi Arabia are worse on Human Rights and against US interests in every way worse than Iran, yet we do not sanction them. Or write as if when we say “jump” their should respond with “how high”.

I’m not herein taking sides on the sanctions themselves, only that the US isn’t dictator to the World. (and to the extent the UN is, we should get out of it, and send it out – I think Toronto wants it, and have the Trump Corp turn it into a magnificent hotel).

Fellate me, conscript, and then feel free to go shrug yourself.

“”The EU is neither a colony or in some other way being subordinate to the USA.””

They’re all members of NATO, and as such are hiding behind our military while they simultaneously spit in our faces.

Were it not for the USA Europe would not exist except as slaves to the germans.

Were it not for the USA Europe would not exist except as slaves to the Russians.

Of course we are not the worlds dictator, but we get to set the conditions with which other countries may conduct business with us.

We should not spend another dime supporting the EU. Let them go to full commie slavery.

We definitely doesn’t want the UN in Toronto.

Any country has the power to impose sanctions, relating to trade and finance with itself, upon any foreign nation or entity which does business with the enemy of that nation. In most cases, those sanctions will have little weight, due to the limited market for foreign goods and services which exist in most nations. However, the US comprises 27% of the world consumer goods market and 39% of the world’s financial wealth. That is huge leverage. The nations of the EU, on the other hand, comprise only about 20% of the world’s consumer market and control about 30% of the financial markets.

Now, ISTEX is designed to eliminate the monetary control available to the US, by virtue of the dollar being the basic basic reserve currency. However, this is of limited usefulness, when the US controls almost 30% of the world’s consumer market and nearly 40% of its financial market. While monetary transactions would not occur between Iranian companies and European companies, the flow of goods would. So, whether US dollars are involved or not, the sanctions could still be applied to stop the European manufacturers from doing business with US companies, thereby cutting them out of the US consumer and financial markets. The European community hopes that the US will choose not to do this and will simply restrict sanction enforcement upon INSTEX, which has no connection to US markets. Personally, I think they are going to be disappointed in their expectations.

Has obama written all over it

There is a compelling reason to leave US troops in Germany: counter Russia. But we don’t need entire armies there, unless it’s advantagous as a staging base.

Do what’s good for the US.

I agree but when the EU makes the US its largest trade partner and then spits in our face it isn’t something that we will take lightly. China is like dealing with the mafia. Everything goes smoothly until you decide to walk away from the deal or they change the rules. They steal your corporate secrets and then run your country’s businesses of that theft out of business. Russia is about as dependable of a trade partner has a cloud. So that leaves the US and the EU. If they want to go their merry way then we need to stop the protection that we have provided since the end of WWII. Wait until crazy Vlad shows up on their Easten border with “Mock” war games. Who they gonna call?

“There is a compelling reason to leave US troops in Germany: counter Russia.”

We can counter Russia without any troops stationed in the corrupt country of germany.

Do you believe we are going to fight an old fashioned land war in Europe?

Who cares if Russia takes over Europe? Isn’t that the Europeans problem? (Europe has been playing Risk for centuries)

I suspect these “special” payments will suddenly become subject to the sanctions imposed on Iran.

It really does seem that the only people trying to save Europe from itself is America! Im leaning more towards the “fuck them” group…let the EU become energy dependent on Russia and Iran and let them reap all the “benefits” that will bring their societies.

I will suggest again that we should take out Iran’s hydroelectric and reservoirs. That would immediately put them in a crisis, and put an end to this deal. Considering Germany’s Muslim problem, we should start moving away from doing business with them, and start considering how we are going to stop European nukes from falling in the hands of Muslims.

“The United States provides about 60 tactical B61 nuclear bombs for use by Germany under a NATO nuclear weapons sharing agreement.”

Perhaps we should pull these weapons back?

We should leave NATO, and right now, and form a new alliance with Poland, Hungary and other countries in northern Europe that really want to be our allies. Also, we should pull our forces out of the EU immediately and enact tariffs against every, single German import.