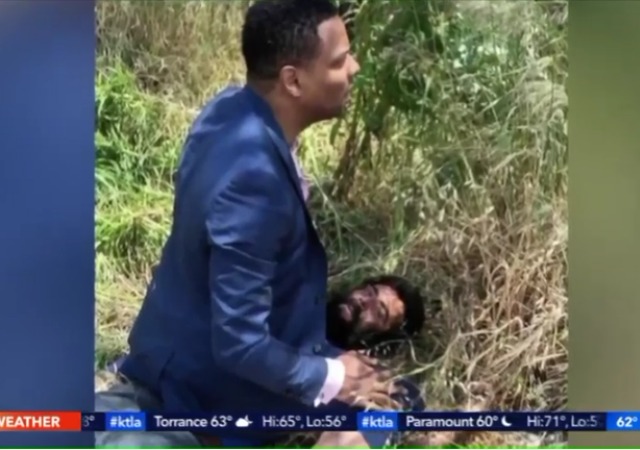 Legal Insurrection readers may recall that in the autumn of 2017, a series of wildfires broke out in Southern California. One of those blazes threatened the famed Getty Center Museum.

On Easter Sunday this year, a suspected arsonist, who set off fires in the Sepulveda Pass near the Getty Center, was taken into custody after a an alert citizen saw the man lighting the fires and tackled him.

The suspect was arrested after Richard Lazenby took him down to the ground and held him there until officers arrived. Part of that confrontation was caught on camera.

“I yell at him, like, ‘what are you doing?” Lazenby told KTLA. “And he says, ‘I’m destroying everything.'”

Lazenby was driving home from Easter Sunday church service with his family when he saw brush fires burning along Sepulveda Boulevard. He then saw the suspect lighting another fire, and blocked the man with his vehicle.

Using an air and ground attack, Los Angeles Fire Department crews were able to quickly extinguish the flames. The blaze was limited to one-quarter of an acre with no structural damage or injuries.

The suspect has been identified as Steven William Adkison, a 31-year-old transient.

Adkison now faces four felony counts of arson of a structure or forest and could be sentenced for up to eight years in state prison, the District Attorney’s Office said.

He pleaded not guilty to the charges during his appearance in Los Angeles County Superior Court and, officials set. He was scheduled to return to court for a hearing in his case on May.

Studies estimate that L.A. County had nearly 53,000 homeless people last year. This represents an increase of about 39% since 2014.

It’s not clear what caused the alleged actions of the suspect.

According to the Substance Abuse and Mental Health Services Administration, up to 25 percent of the homeless population suffers from some form of mental illness.

“Being on the street exacerbates and develops mental illness. Just like most of our, most of our soldiers, the men and women in the armed forces, that go overseas and have fought in these horrific wars, they didn’t go over there with Post Traumatic Stress Disorder. They didn’t go over there with anxiety conditions or with depression or with alcoholism. They came back with it,” [said Bill Walker, the director of Kern Behavioral Health and Recovery Services].

Homelessness and the associated health problems related to it are problems that can only be solved by changing the political climate that prioritizes social justice over public security.

In Sacramento, after already legislating hundreds of millions of dollars in funding for combating homelessness ineffectively, we now tax responsible residents out of more of their hard-earned income, to build tiny homes for people currently living and pooping on the street who will turn these houses into tiny crack houses, as has already happened in Los Angeles. Homelessness is only increasing in California, along with tent cities, used needles, piles of defecation on the streets, and communicable diseases.

The Democrats who control the state have solved nothing, and are spending ridiculous amounts of money doing it. It’s hard not to ask who is getting rich off of some of these dubious programs.

It’s time for big-city Mayors to back down and allow success to happen with the state’s most vulnerable people through proven private and non-profit programs. Money in the hands of politicians is about control, and not results. The State, county and city governments cannot and will not ever achieve any real results with California’s homeless epidemic.

Unless there is a change in the approach to homelessness, Californians better hope that citizens like Richard Lazenby remain in the state. We will need more heroes.

I remember a friend visiting me in California years ago who finally figured out that when he sees a photo of brown hills, it is late spring and summer in CA, and if it is green, it is late fall through to early spring.

This man was tempting fate. The lost of life and property by this weirdo would have been enormous.

So, good on that dude for stopping him before he lit a fire that could have been much worse.

Considering how great the scope of loss of ife and property is, perhaps punishment for intentional arson in this kind of case should result in capital punishment?

perhaps punishment for intentional arson in this kind of case should result in capital punishment?

In California he is immune from punishment.

They will probably find something to charge Lazenby with.

Bravo to the hero citizen and to the Los Angeles Fire Department for quick action to thwart any serious damage or injuries from this alleged arsonist’s crime.

However, I can’t help but have in the jaded recess of my mind that next week we’ll read about some activist homeless org and its lawyers suing the hero citizen on behalf of the alleged arsonist for ’emotion stress’ or physical assault, or some such nonsense.

Let’s see….how does Trump’s rhetoric play into this one….hmmm….maybe this man is a transient because of ______ (fill in the blank) and that drove him to this mentally unstable point. The possibilities to connect anything to Trump are endless, no?

Bernie had that covered in a speech today.

Drug abuse, homelessness, despair are all the result of being left behind in Trumps Economy that only favors the rich

Of course Bernie. We didn’t have any homeless or unemployed while Obama was President did we?

The Big Test for the American Electorate will be how people like Bernie Sanders sell Socialism with Venezuela playing in full view; Venezuelans eating from the back of garbage trucks, without toilet paper, and running for their lives out of the Country.

And Venezuelans cannot even shoot their way out of the Socialism they elected by giving Hugo Chavez the pwoer because Venezuela doesn’t have a Second Amendment Right and Chavez got gun confiscation passed in 2012 to take effect in 2013. There are clues here why Socialist Democrats like Bernie want Gun Control leading to Gun Confiscation.

c’mon man, he was just trying to warm up his lunch…. geeshe… climate alarmists are already preparing a lawsuit for tackling that poor soul, he could have caused a fire????

From the photo alone, it appears as though the perp was beheaded.

From the photo above I thought:

Arson: So easy a caveman can do it!

First we’re told all the fires are due to global warming. Then after we’ve had both a wet/dry winter monsoon season – various agency fire marshals tell us we’ve got extreme fire conditions. Wet or dry, doesn’t matter. Then some jackwagon from California Substance Abuse and Mental Health Services Administration insinuates that soldiers returned from overseas military combat are psychos and are lighting fires? Screw you pal.

When the real problem is three fold:

1) Urban fires are started by vindictive, screw the world, a-hole hoboes. We’ve had some very bad fires due to these jerk criminals. I don’t care if they’re alcoholic heroin addicts. Put them in prison for max sentences and then make them cut brush in work gangs.

2) California is a huge state and trying to do preventative fire forestry via timber sales and prescribed burns helps – but again – huge state with millions of wild acres to manage and the Feds USFS/BLM control a great proportion of those remote forest areas.

3)Blaming PG&E or Edison for causing these fires via power lines and tree branches is a huge Lawyers Guild Money Scam. The lawyers were thick as thieves after the Paradise/Camp Fire firestorm. Some serious ambulance chasing ensued post Camp Fire. The worst fires generally happen during our seasonal fall windstorms. In the north it’s very dry winds blowing off the high plateau deserts in Oregon, Idaho and Nevada. In the south it’s the Santa Anna winds. There is no bloody way to ensure that a tree won’t fall across power lines. It’s just not reasonable.

3)Blaming PG&E or Edison for causing these fires via power lines and tree branches is a huge Lawyers Guild Money Scam. The lawyers were thick as thieves after the Paradise/Camp Fire firestorm. Some serious ambulance chasing ensued post Camp Fire. The worst fires generally happen during our seasonal fall windstorms. In the north it’s very dry winds blowing off the high plateau deserts in Oregon, Idaho and Nevada. In the south it’s the Santa Anna winds. There is no bloody way to ensure that a tree won’t fall across power lines. It’s just not reasonable.
———————————–
I laughed out loud when PG&E filed for bankruptcy and say a statement by one of the greenie weenie directors of some greenie weenie program crying about the loss of money for their projects and wondering who would now fund his programs.

“Homelessness and the associated health problems related to it are problems that can only be solved by changing the political climate that prioritizes social justice over public security.”

“It’s not clear what caused the alleged actions of the suspect.”

Some people just want to see the whole world burn.

“It’s not clear what caused the alleged actions of the suspect.”

He is not a victim. He chose to start the fires. Nothing “caused” his actions. “Why?” is a different question.

He identified as Guy Montag but didn’t have any books handy?

He was scheduled to return to court for a hearing in his case on May.

Well, this is May, at least where I am.

Civilization would function far more smoothly if we had a slightly more serious government. The citizenry are doing their jobs, but officialdom is just going through the motions until they all qualify for their pensions.

This is the classic formula for vigilantism, of course. Law enforcement fails, but then the people step in. Not ideal, but at least workable.

So, how long before we see a local reporter’s “LA Is Dying” video on YouTube?

Our nation is in big troube from within. If corrupt leftist drones infesting our government and schools wasn’t enough, we have a sub-culture army of street crazies infesting every major city, harrassing people, spreading disease, crime, etc.

How, they’re in the woods.

A must-read on this topic is Marvin Olasky’s “The Tragedy of American Compassion.”

liberals would have us believe that Christian church goers are what is wrong with America.

“According to the Substance Abuse and Mental Health Services Administration, up to 25 percent of the homeless population suffers from some form of mental illness.”

SUBSTANCE ABUSE AND MENTAL HEALTH SERVICES ADMINISTRATION is rarely quoted or in the news and should be recognized as one of the most useless, wasteful, incompetent, and despicable government agencies in existence.

Per someone who had a short and frustrating tenure with the agency: “Staff virtually wear slippers to work daily and spend outrageous amounts of time (if not most of most days) redecorating their offices, having pot-luck get-togethers, moving the offices from one overpriced government location to another —– or traveling on the taxpayers’ dime to useless and extravagant meetings.”

If SAMHSA was actually doing its job, perhaps a lot of the devastating news would not be.

And thanks to the Demonrats, all of these mentally ill ‘bums’ aren’t in mental hospitals/facilities where they belong.

Being homeless is NOT A FREAKING EXCUSE TO BE AN ARSONIST AND TO SET FIRES!

The results of the Paradise Fire with 85 people and billions in lost property only serve to support that a Death Penalty should be the minimum sentence because like Pedophiles, they are just never rehabilitated. https://www.usatoday.com/story/news/2018/12/03/camp-fire-death-toll-california-deadliest-wildfire/2199035002/

AND THEN OF COURSE, WE HAVE THESE SANCTUARY CITIES WITH THEIR HOARDS OF ILLEGAL ALIEN COCKROACHES WHO HAVE NO CARE ABOUT THE COUNTRY THEY JUST INVADED, WHETHER THEY ARE TAKING A DUMP ON A PUBLIC STREET OR SETTING A FIRE LIKE THIS JOKER ATTEMPTED TO DO.