Plus, a look at life on Facebook with all its fun, new “Fake News” restrictions!

We may have entered the next phase of social media evolution, in which the networks will have to change to meet the needs of the American market or dies.

CrossFit, Inc., which boasts 15,000 affiliates and millions of followers, said it was investigating alleged security problems and opposed what it called Facebook’s overwhelming influence on”the marketplace of public thought,” the fitness company said in a statement.

“All activity on CrossFit, Inc.’s Facebook and Instagram accounts was suspended as of May 22, 2019, as CrossFit investigates the circumstances pertaining to Facebook’s deletion of the Banting7DayMealPlan and other well-known public complaints about the social-media company that may adversely impact the security and privacy of our global CrossFit community,” CrossFit said in a statement.

Facebook reloaded the group, but CrossFit couldn’t shake off what happened:

Even though the group has since been reinstated on the platform, “Facebook’s action should give any serious person reason to pause, especially those of us engaged in activities contrary to prevailing opinion,” CrossFit said.

The fitness company said these actions are in line with its “tireless defense of its community against overreaching governments, malicious competitors, and corrupt academic organizations.”

In addition, CrossFit, which is vocal about extolling the virtues of the brand and its contrarian identity, said it was investigating other allegations regarding the social media behemoth, including how the company “collects and aggregates user information and shares it with state and federal authorities, as well as security organizations from other countries,” and how the company “collaborates with government security agencies on massive citizen surveillance programs.”

Beyond privacy concerns, social networks have strangled conservative content, especially on Facebook after Congress grilled CEO Mark Zuckerberg about posts on the platform during the 2016 election. Facebook has become so bad that co-founder Chris Hughes, who started the social media giant 15 years ago Zuckerberg, says it’s time to break up the company.

“Mark’s power is unprecedented and un-American,” Hughes wrote Thursday in an editorial in The New York Times. “It is time to break up Facebook.”

“Facebook would have a brief period to spin off the Instagram and WhatsApp businesses, and the three would become distinct companies, most likely publicly traded,” Hughes writes. “Facebook shareholders would initially hold stock in the new companies, although Mark and other executives would probably be required to divest their management shares.”

I couldn’t agree more. After Facebook temporarily banned several history-oriented websites, including my own, I concluded that the algorithms have significantly changed ahead of the 2020 election. I suspect there more changes will occur, likely to stymie President Donald Trump’s successful social media team from being as effective as they were in 2016.

I want to share with you a glimpse of life under Facebook’s rules for those who do not adhere to its train of thought. I administer a page that follows news related to Trump. Facebook’s band of social justice activists have now generated a “Group Quality” a menu option.

Facebook’s team then sends out warnings about memes, videos, or posts that it deems as “fake.” Even if that item is a satire piece..shared because it is a satire piece that everyone chuckled over. 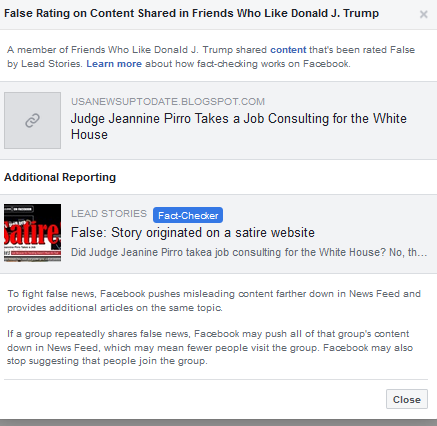 The problem with this approach is that Facebook uses these “warnings” to threaten pages such as mine with limitations, restrictions on membership, and other penalties designed to prevent us from reaching new audiences or supporting the members we already have.

Terry Lee Ebert Mendozza, a founding member of Trumpettes USA, has found herself on the frontlines of this struggle.

Free speech according to Facebook, only belongs to far-left liberals. I would love to know whom (if ever anyone) on the left has been censored in this way.

I would argue that social media’s algorithms and rules are too secretive, too selective, and pose a danger to our democracy. And I do not buy the argument that “there are other options” either. The tech giants have used their enormous wealth to seal off effective competition.

Today’s social media platforms will have a significant influence in the 2020 election, at a level which is much more disturbing than anything from Russia or China. It has become apparent no conservative target is too small to contain and control.

Facebook, Twitter, and other “platforms” have long given-up the pretense of being anything other than a publisher and promoter of progressive content. I hope it is not too late to break up the monopolies, change the designations, and explore additional information sharing options before we vote in 2020.

What kind of idiot relies on Facebook for news?

The problem is not so much that anyone would rely on Facebook for news, but that users have no choice in what Facebook inserts into their timelines–sponsored posts, “curated” news items, etc–and this may influence people in subtle or not so subtle ways.

Users in fact do have a choice … it’s all in how they configure their preferences. I don’t receive any news at all … just an occasional add.

Good point. But are many users unaware of such configuration options? That’s what I suspect is the case, based on what I have heard about other examples of mass IT products and services.

Well yes, we know that. It is one of the issues discussed in this post that we are commenting on.

They don’t care that the government must gets its money from YOU.

They consider your money to be their money

IIRC, facebook recently announced the removal of 3 BILLION fake accounts in the last six months. This represents over 40% of the world’s population. How could this fly under zuck’s radar? I wonder if the advertisers on facebook will demand refunds (I’m assuming they have advertisers. Not having an account, I don’t know). Social media seems to have become a poison in society, especially to anyone to the right of mao.

In the words of that great American…..Burn that bitch down.

Off topic, but oh, so timely! Great news for Memorial Day!!

Brian Kolfage and We Build the Wall, Inc., have built a half mile of very strategically useful FENCE/BARRIER:

I donated and will donate more!!!

The gap is across from the Mexican city of Juarez. Currently, the El Paso Sector is the second busiest sector in terms of family apprehensions/UAC’s this fiscal year. Those categories now make up the majority of Border Patrol apprehensions.

Kobach explained the current wall ends abruptly and then there’s gap for about half a mile between the end of that wall and Mt. Cristo Rey in New Mexico. Mount Cristo Rey sits on the west side of El Paso. Kris said, “The gap is a half mile wide corridor and it’s literally a parking lot on the Mexican side and then you walk five steps and you are in the parking lot on the American side. There’s no barbed wire. There’s not ANY barrier. You just walk from one parking lot to the other.”

This is great, but we also need to implement drone swarms with a combination of surveillance and anti personnel drones. If we expect to stop the invasion then we need to make death while invading a high probability.

Zuckerberg has turned out to be quite a sinister character. The power this creep possesses is amazing. Almost as scary as obama in the White House.

I know it seems simplistic, but to me the answer is obvious: DON’T USE FACEBOOK.

Its not just algorithms. They use complaints as an excuse. And there’s a veritable army of Fascist SJW’s that lodge complaints about everything that offends them in any way.