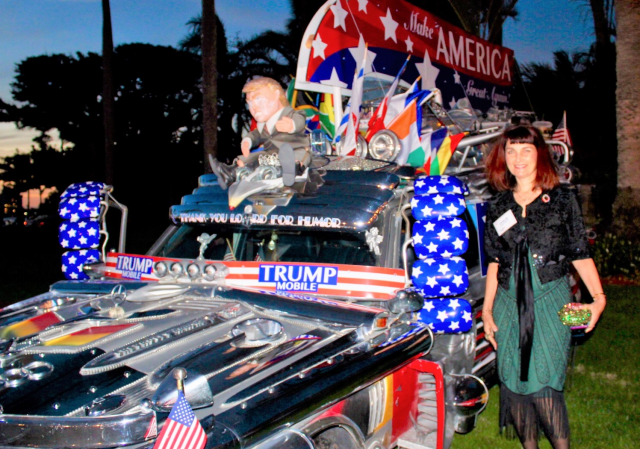 Last Jan. 20th, I celebrated the inauguration of President Donald Trump by binge-watching all the coverage while drinking champagne labeled “Liberal Tears”.

Courtesy of my friend and fellow Egyptophile, Terry Lee Ebert Mendozza, I was able to drink more champagne to commemorate the first anniversary of his administration with many of President Trump’s initial campaign supporters during the Red, White, and Blue Celebration at Mar-a-Lago hosted by Trumpettes USA.

In part, the event’s decor and theme were designed to counter the dark-and-dire media coverage of Trump’s presidency. For example, the guests and the decoration were selected not only to be patriotic, but colorful, to contrast against the funereal black that is promoted during the entertainment industry’s award ceremony. It was truly an array of red-white-and-blue.

So when selecting my attire for this event, I went with an Egyptian-inspired, green cocktail dress. In part, it was an homage to a statement that Eric Trump gave about his father.

“My father sees one color, green,” Trump said on “Fox and Friends” Wednesday morning. “That’s all he cares about. He cares about the economy.”

It turns out that the “green” of the robust economy was one aspect of the Trump presidency that was mentioned when I asked my fellow guests about what they liked best during this first year. The fact that the Dow Jones closed above 26,000 was at the tip of everyone’s lips.

The other aspect that was noted frequently is how much they love Trump’s battle with the press and intend to cheer him on when he hits the #FakeNews with one of his Twitter bombs. The happiness and optimism of the people attending were palpable.

One of the running jokes throughout the entire evening was based on the recent drama the elite media and Democrat politicos tried to gin-up about the term, “sh**hole.” 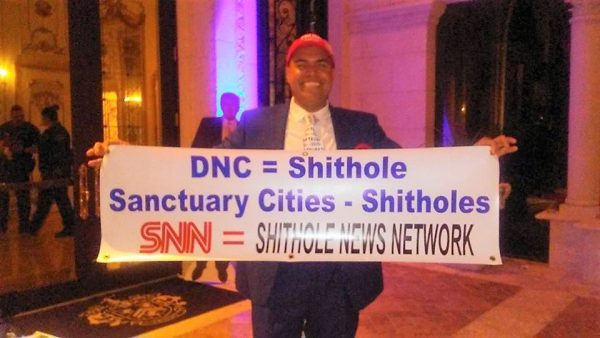 Fox News Channel’s Judge Jeanine Pirro was the keynote speaker, and she began her passionate and “evidence-based” review of President Trump’s successes with the statement that Mar-a-Lago, “sure ain’t no shithole.” Her mocking of the media drew a deafening round of applause.

Pirro spoke for about 15 mintues and inspired a rally-like response of “Lock her up!” with her criticism of Hillary Clinton.

Pirro’s praise of the president’s decision to move the U.S. embassy to Jerusalem drew applause and brought some guests to their feet. Pirro called out the Justice Department as corrupt and said a Clinton presidency would have destroyed America. 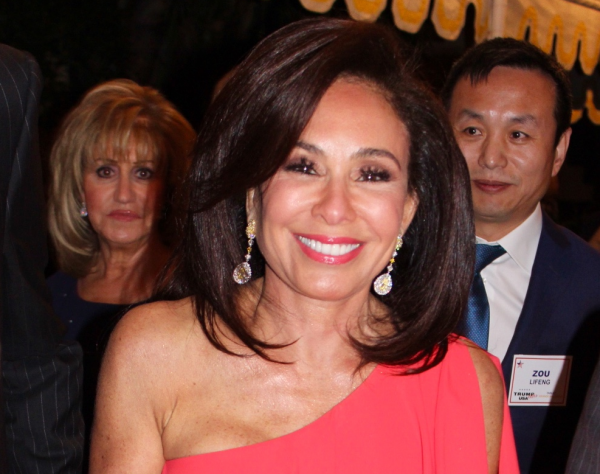 The contempt that every Trump supporter at that celebration has for the American press cannot be overstated. There were 800 of them from all over the nation, and another 1,000 were clamoring for tickets to get in.

I was seated next to Ken Koldenhoven, a West Palm Beach resident who is good friends with Secretary of Education, Betsy DeVos. We were able to exchange information, as he is involved in education projects in the inner city and he is keen to support the efforts of Legal Insurrection’s college focus.

Koldenhoven gave a chilling account of the reasons for the high cost of DeVos’ security detail. Not only has there been property damage, but white powder has been mailed to the home and her family members have also been threatened.

It also turns out the students at the Historically Black University who turned their backs on DeVos when she gave a commencement address were paid $150 each to do so, according to Koldenhoven.

Finally, I had the chance to meet Ildiko Varga, a Hungarian-born resident of Palm Beach, a savvy businesswoman, and a founder of “Women for Trump“. We compared notes on how popular President Trump is through Eastern Europe, and both agreed that his visit to Poland was a wonderful signal to that up-and-coming economic power. 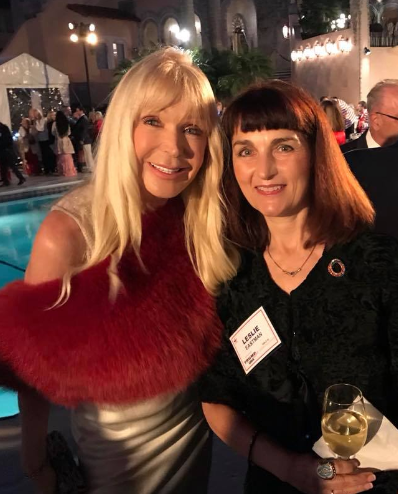 I can well imagine the despair of the progressives who were promised that Trump would quit or be impeached before the end of his first year. Their commemoration of this day is probably the complete opposite of the revelry of our vibrant celebration.

I anticipate that the 2019 party for Trump’s second-year celebration will be even more marvelous! I have my champagne chilling already.

I love Judge Jeanine…. sounds like an awesome event.

Judge Jeanine was a gracious as she could be. I even got a shameless selfie with her. Beautiful in and out, and what a speaker!

That is really nice to hear. You never know how celebrities are in person. TY

Rule #6
A good tactic is one your people enjoy

Give em hell Twenty! We love you.

“My father sees one color, green,”

I’ve heard that line from a lot of Texans. It resolves like this: The only color that counts is green, and the only question to be answered is, “Can you deliver,” as in “Can you do the job?” and “Can you pay me?”

It’s a very widespread attitude by both businessmen and workers.

Was forced to watch CNN at a restaurant tonight.

It was unbelievable all the fake news they were spinning.

First the were running a headline on the banner:

I am wondering for who?

Second – they were saying that all these protests were breaking out today in DC because of the Government shutdown.

Duh, wasn’t today suppose to be the Women’s March. The blatant dishonesty it at it’s peak.

“blatant dishonesty” doesn’t even represent it in its full insidiousness.

This is scam to usurp our Republic. The Chi Comm military is a piker compared to the army of traitors infesting our government, media and educational system, and pales as a threat in comparison.

But for the incredible incompetence of hillary klinton, it was nearly accomplished.

It’s actually laughable, and much like watching the ridiculous Baghdad Bob during the Iraq War.

CNN, MSNBC, NY Times – they’ve become such a joke, and they’re so predictable in the b.s. they put forth, that it’s become second nature to ignore them. In other words, they’ve become boring. And irrelevant, except to the soros army.

Looks like a Yuge gathering of lots of people that are all working hard to MAGA. Keep up the good work Leslie.