“Burning Man” event might be snuffed out by permitting rules

“Burning Man” event might be snuffed out by permitting rules

Bureau of Land Management wants to build a wall around “Burning Man”. 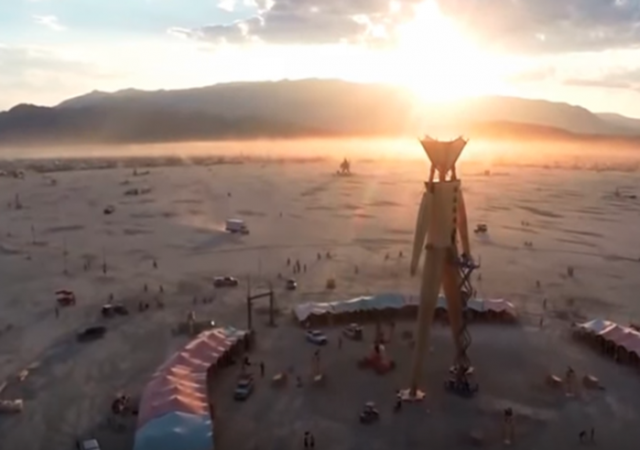 It appears that the US Bureau of Land Management may soon impose new rules that could snuff out the iconic “Burning Man” event.

Taking a page from President Donald Trump’s plans for the southern border, administration officials want to erect a wall around the temporary city.

The problems started when the event’s organizer, Burning Man Project, applied for a permit from the U.S. Bureau of Land Management (BLM) to hold the event in northern Nevada’s Black Rock Desert for another 10 years.

Then the BLM responded.

The agency, which is part of the Interior Department and manages public lands, issued a draft of the Environmental Impact Statement (EIS) required for the permit on March 15.

BLM wants 10 miles of concrete barriers installed on the event’s perimeter for security, a requirement that organizers install dumpsters and hire companies to haul out the trash and authorities in place to conduct vehicle searches at the gate.

This video of an aerial view of the Burning Man area offers a look at the scope of the project.

The BLM’s proposed changes to the event also include drug screenings and dumpsters in Black Rock City.

Understandably, the organizers are shocked that officials want to actually manage the land for which it the bureau is responsible.

Burning Man event organizers took issue with proposed requirements that came in a more-than-150-page report and fired back in a post on their website, writing, “The proposed level of government surveillance of and involvement in our everyday operations is unprecedented and unwarranted, and is unsupported by the … analysis.”

The organizers said security operations, how many cars are allowed into the event, how people are tracked while there and how lighting is used would all be affected by the proposed rules. That could hurt tickets sales, they said.

Given how may of the attendees are green justice activists, it is fascinating to see arguments related to pollution control be used for the new rules.

The government also has concerns about lights being used at night, including large work lights, high-intensity lasers and search lights, which BLM said can disrupt birds and other wildlife, and contribute to light pollution. As a result, the potential to ban or curtail some of the lighting is on the table.

“Back on Earth, Burning Man has a robust nightlife which, combined with the artists’ technical creativity and the darkness of the playa, heavily features light-based artwork,” the organization said in its fact-checking statement. “The nighttime Black Rock City skyline has become a hallmark of the Burning Man experience, including innumerable LEDs, lasers, and searchlights throughout the city.”

It denies that the night lights affect the local fowl population. “In fact, birds are rarely encountered on the playa in hot summer months,” they said.

I also find it highly amusing than the attendees, many of whom normally love Democrats and the Deep State, are now bitterly clinging to the US Constitution.

Funny how Trump’s BLM thinks mines, petroleum extraction and logging are just fine on public lands but wants to weaponize regulations to force an annual gathering of progressive people out of existence. https://t.co/ZjUYKklv1V via @HuffPost

On the other hand, many Americans understand the issues that are clearly at hand.

I’m sorry, but all I hear is a bunch of rich people, who want to cosplay post apocalyptic homelessness for a week, inconvenienced that BLM wants to make sure that their hoards are behaving in an environmentally responsible manner. Priorities kids. . . https://t.co/lGB0QqoWhe

In conclusion, I suggest that “Burning Man” supporters reflect upon display that was at one of their previous events. 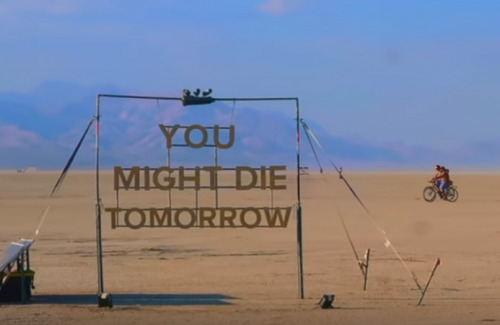 Not everyone or everything was meant to last forever.

How many of the greenies hollered and cheered when the BLM was raining down hardship on ranchers across the midwest?

Now, their party is being given the same standards of management and they whine, moan, and pitch a fit. Bye felicia.

This times 1000. When they are ready to defend Burning Man like Bundy Ranch was defended, I might have some interest in their position. But then again, these particular critters do not have the tactical sense or restraint that those at Bundy Ranch had. And they will give the Feds an excuse for the massacre they wanted at Bundy Ranch.

Which would reduce the number of enemies in a Red-on-Red encounter, and maybe make the survivors less in love with overwhelming Federal power.

Needs a carbon tax on the event goers and all carbon producing entities of any sort including the original production of all the things they bring. Bring a bicycle and the cost to produce it in carbon tax should be paid every year. Surely they’ll happily pay their FAIR share to save the environment.
Right? Hahahahahaha, wait until we carbon tax their exhalations too.
Tax them back to the stone age they want to celebrate is my view.

From what I’ve read before, the Burning Man festival goers do lots of drugs and leave a grand mess in their wake. Art my aching a$$.

I prefer that they either be prevented from making the mess, or pay to clean it up. Not my monkey, not my show, not my bill.

As for the drugs, I don’t care. In the grand scheme of things, going out to the middle of nowhere with a bunch of like-minded people is probably the best plan for adult druggies. They don’t want the Feds anywhere near, because said Feds will interfere with the intense and widespread use of drugs. That is the basic rationale for the wall. Keep it all inside, check cars coming in for weapons, and Daddy doesn’t have to come upstairs.

Can’t say I’m a big fan of nannystateism no matter who’s being harassed or how much they may deserve it. Americans should have the right to head off to the ass-end of nowhere for a while and act like jerks, as long as they pay their bills afterwards. So shut down the federal nanny department and back the screws off the poor taxpayer just a bit.

Up until a few years ago I would have agreed with you.

But thanks to the tireless efforts of progressives, totalitarianism now seems to be inevitable. We appear to be only one election away from Venezuela-level darkness and dictatorship. Institutions that allegedly protect us from tyranny (the media, academia, courts) are instead striving 24/7 to shove us into the abyss of communism.

So if dictatorship is in our future (as I think it is), then I am selfish enough to want the little Stalinists who lusted for the all-powerful State be among the first to enjoy being on the receiving end of its wrath. It is nothing to me if a bunch of rich, pampered progressives cannot enjoy their own re-enactment of “Lord of the Flies” because of the self-important bureaucrats they created in the first place. Let this be a tiny taste of something progressives hate: justice.

Don’t be so negative. We’ll probably win the shooting war.

Can’t hunt or ranch there. Can’t do anything….except trash the area. Lease the area complete with a cleanup bond like ranchers and hunting camps (the few allowed under Clinton-Bush-Obama regimes). Use the money for wild life replenishment and habitat.

Been to a National Park lately? How about Zion when they restrict car traffic? The first site you see is the ca$hier. Make it a National Park and set the fee schedule such that the cleanup and restoration is completely covered. And if “vendors” want to set up tents and tables, puhiawa’s bond get applied to organizers and vendors. Put up some barriers, Rangers in Jeeps with the support of the Dems much loved “drones” to patrol the perimeter, and let the good times roll.

I have family in Northern Nevada. Locals hate it when the Burners come to town.

Robert Conquest’s Three Laws of Politics, rule 1, seems to apply here: “Everyone is conservative about what he knows best.”

Now if we can only convince the pissed off Burners that this isn’t an isolated case, that this isn’t just one time where BLM regulations are being applied in a draconian fashion, that others they consistently revile have been in the same boat–perhaps we can gain better cross-aisle understanding.

Burning Man grosses millions of dollars a year. At present, admission tickets are $390 with a $80 vehicle pass mandatory for each group. This is about $35,000,000 in revenues, making Burning Man big business by pretty much any standard. And of course the admission fees are a very small percentage of what is actually spent on Burning Man, plus RV rentals, luxe camping fees, etc.

Why don’t they purchase the land, or equivalent land from a private seller? I just checked and 920 acres near Gerlach, NV is $350,000:

Burning Man’s land is 7 square miles or about 4,400 acres but that gives you an idea of the approximate value.

I’m not sure if I see the need for a wall around Burning Man. Seems to me that need should be determined by how many people get free admission by bypassing the gates. If that’s not enough to justify the cost, who cares?

The burning man web site says that they clean up the playa. BLM says they don’t. If there is no other use for the land, though, who cares whether it’s cleaned up or not? On the other hand, with a $35m annual budget, seems to me cleaning costs would be pretty insignificant.

Drugs seem to make events like Burning Man function. I’m not too comfortable with that, but it’s the way things are. I think if people want to use them it should be their choice. As another commenter said, better in a remote location with fellow druggies than in the city.

Unlike many of the people here, I admire Burning Man and would like to see it survive and thrive. I suspect there are other rural communities who would be interested in the jobs and prosperity fed by this temporary city …

Not five miles north of Burning Man lies a federal wilderness area. Talk about restrictive. To the northwest is highrock canyon – another restricted wilderness area. You know what the difference in ecosystem, terrain and geology is between the north playa and the south playa (black rock desert and smoke creek desert? Not much. A few indian tribes manage and control land in the region.

Tell them to put on wigs and call the event Burning Woman.

Given affirmative action, they’ll get a pass for another round.