Biggest Losers in European Election: Centrists, the Press, and ‘Eurocrats’

Biggest Losers in European Election: Centrists, the Press, and ‘Eurocrats’

Calling the voters “stupid nationalists” didn’t work out as well as hoped. 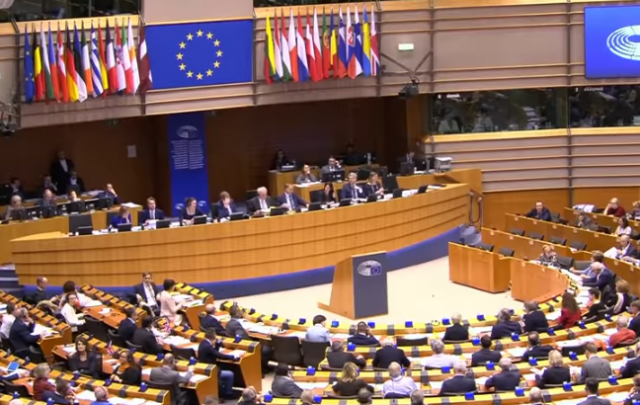 After celebrating the win of the “Australia First” Liberal Party, and cheering on the milkshake-covered Brexit candidates in Great Britain, it pleases me greatly to report that anti-EU parties made significant gains in Sunday’s European election.

After processing the results, I have several essential takeaways. Perhaps the most significant that the win for the anti-EU parties is a hard loss for the centrists who want to run the entire world from Brussels.

Europe’s centrist parties took a beating in the European Union’s parliamentary elections over the weekend — losing ground to environmental and liberal groups as well as far-right and populist parties.

The upending of the traditional order was particularly noticeable in the UK, where Nigel Farage’s single-issue Brexit Party took a third of the votes — while outgoing British Prime Minister Theresa May’s Conservative Party won just 9 percent, putting it in fifth place.

Farage said Monday the result makes the case that Britain should leave the EU, even if an agreement on that exit isn’t reached.

The press also lost since it no longer has a public willing to believe its reports. For example, Britain’s conservative icon Katie Hopkins derides the articles presenting the vote-count as a win for #Remian.

How many MORE times do we have to vote Leave and be ignored?

In the #EuropeanElections The Brexit Party won by a clear margin.

STILL the Establishment, the BBC & the London elite say this was a clear win for Remain pic.twitter.com/4kXG7IWcvd

Interestingly, Professor Seth Barrett Tillman at the National University of Ireland Maynooth notes that the press has neglected to mention that the success of the Brexit Party may herald an even more significant victory in upcoming national elections.

Non-British EU citizens who are resident in the UK are allowed to vote in the UK in EU elections, but as a general matter, such Non-British EU citizens do not have voting rights in a general election for the (national) Westminster (or UK) Parliament. That will cost Remain 100,000s, if not millions of votes in the next general election. That’s what they are not telling you, and they never will.

Finally, “Eurocrat” elites lost after they insulted voters for selecting representatives that have concerns about their home country.

European Commission President Jean-Claude Juncker has lashed out at “stupid nationalists” on the eve of European elections in which euroskeptic politicians are expected to make gains in the European Parliament.

In an interview with CNN on Wednesday, the outgoing president said he was only too aware of the threat that nationalist politicians pose to European solidarity, which Juncker called the “main objective of the EU.”

And while the election provided plenty of winners last night, perhaps those who love liberal tears came out the biggest winners.

I don’t speak French, but this video captured one of the many meltdowns perfectly. French leftists took Marine Le Pen’s win with the grace and dignity we have come to expect from them under such circumstances.

France: Macron supporter has a hissy fit on live TV after finding out Le Pen is likely to win EU elections. pic.twitter.com/3Xhta9ZWtU

And while it is wonderful to savor the tears, it is crucial to keep an eye on the bureaucratic response to the voting. It appears the European Deep State is playing from the anti-Trump handbook. For openers, the European Union’s anti-fraud watchdog has considered investigating Nigel Farage for a potential investigation.

The European Union’s anti-fraud watchdog has considered whether Nigel Farage should be investigated for any illegal activity over lavish payment from Arron Banks, the Guardian has learned.

The agency, which goes by its French acronym, Olaf, revealed it was carrying out an assessment, which could lead to a formal investigation. This “initial assessment … does not mean that the individuals in question are guilty of any wrongdoing”, it said.

While not a full-blown inquiry, it is a rare and significant step for Olaf to consider investigating a member of the European parliament.

Charges of Russian collusion appear to be on the horizon as well.

I was privileged to give a Tea Party address in Florence to members of Tea Party Italia in 2010. I even gave the speech in Italian, thanks to some good friends.

I am thrilled to see that citizen activism is succeeding on both sides of the Atlantic, and I hope we can report more success and prosperity for all of Europe’s nations…even France.

“…. centrists who want to run the entire world from Brussels.”

Calling the people who want to bring the whole world under the control of unelected bureaucrats “centrists” is just a bit much.

These people are pushing for slavery, just like the old, revolutionary communists in Russia and China. They are even re-using a lot of the old violence-and-propaganda methods.

Leslie, I get that you are using a quote. It’s just that the doublespeak is so striking.

They aren’t ‘centrists’ whatever that means. They are just leftists who want to boil the frog more slowly so that it doesn’t notice as quickly.

They’re “centrists” in the sense of an establishment that lost this election to reformists and radicals from both the right and the left.

But you’re correct, the status quo they want to preserve is already a leftist regime.

Thanks for the link! I am very encouraged by this approach.

The big mistake the German people made when the Nazis came to power was failing to embrace all of their citizens.

I don’t speak French either, but I did hear a lot of what I believe is their F word in the Le Pen/Macron video. One German word does come to mind however…schadenfreude.

The talk, both here and abroad, about “nationalists” is nothing more than propaganda to disguise the goal, communism with them being the head commies. You and I will be the slaves.

Both US and European “nationalists” are really just the group opposed to the communists, the group fighting to maintain freedom and liberty. The true fascists and racists are the radical left communists for whom truth is like a silver bullet, a wooden stake.

Merkel, as we all know, is considered right-conservative. The EU’s foreign minister is a self-declared Communist, yet in Brussels she represents the moderate left (her father a wealthy Italian filmmaker of course.)

BBC represents an odd mixture of 1930’s Oxfordian-Wobbly Leninism and identity driven progressivism imbued with caste-nationalism (for instance they crow a lot about how modern computing was born at Bletchley Park-Manchester, Turing, computable numbers and Colossus.)

This morning NPR interviewed an editor from The Economist about the “meaning and significance” of the past election as if he were a centrist neutral observer – when in fact The Economist editorial board is hard left.

The press are either ACTUALLY TRYING to claim this was a ‘win’ for Remain, because only 5 million people votes for Brexit in this round! Yes, this is something they are actually trying to claim.

Go to Dailymail right now. There is literally not a single story about the election in the ~100 stories loaded on the main page.

Very true. I was checking the Daily Mail site yesterday. Like it never happened.

at the top of the page, you can click a tab for “UK” and that takes you to the UK-oriented news headlines instead of their American/international stories. They had election storied there this morning.

You forgot Francis the Marxist and his puppet European cardinals and bishops. By the way, I’m a Catholic who attends mass weekly.