ACLU: “We will absolutely make sure that abortion remains legal in all 50 states as it is today” 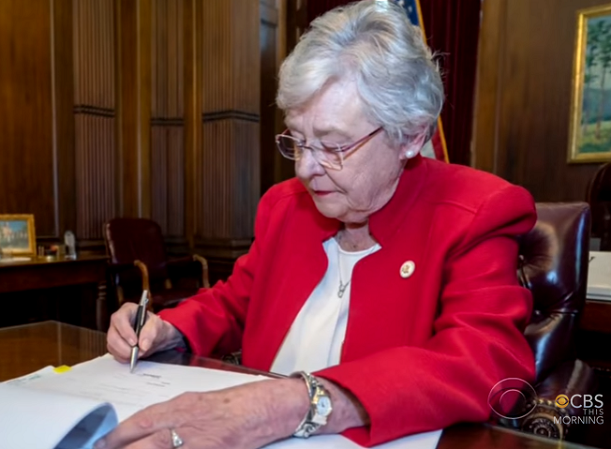 On May 15, 2019, Alabama governor Kay Ivey (R) signed into law Alabama House Bill 314 (HB314), the “Human Life Protection Act.”  The new law bans abortion in the state unless the life of the mother is at stake and goes into effect in November of this year.

Laws like this one, including the recent spate of fetal “heartbeat” laws enacted or proposed in numerous states, have been designed with the stated intent of provoking legal challenges that land in the Supreme Court.  The goal is to get the Court to revisit and possibly even overturn Roe v. Wade.

While it’s not certain that the Supreme Court will take up the case or how they would rule if they did, the ACLU and Planned Parenthood want to find out.

The American Civil Liberties Union on Friday filed suit on behalf of abortion clinics against the state of Alabama to block the most restrictive abortion law in the nation.

. . . . The lawsuit, filed in United States District Court for the Middle District of Alabama, sets off a chain of events that both sides say is likely to lead to a years-long court battle. State lawmakers have said they passed the law specifically to bring the case in front of the U.S. Supreme Court, which they see as having the most antiabortion bench in decades. The bill was designed to challenge the 1973 Roe v. Wade decision by arguing that a fetus is a person and is therefore due full rights.

In the filing, Yashica Robinson, a doctor at the Alabama Women’s Center — one of four abortion providers in the state — argues that the law “directly conflicts with Roe and more than four decades of Supreme Court precedent affirming its central holding.”

Such a ban would inflict immediate and irreparable harm on patients “by violating their constitutional rights, threatening their health and well-being, and forcing them to continue their pregnancies to term against their will,” Robinson argued.

The other plaintiffs in the lawsuit are Planned Parenthood Southeast, Reproductive Health Services and West Alabama Women’s Center on behalf of themselves, their patients and physicians.

The ACLU is determined to fight for abortion “rights” to the very end, and according to Vox, have vowed to “absolutely make sure that abortion remains legal in all 50 states as it is today.”

“We are confident that the courts are going to block not only Alabama’s” abortion ban, but also similar laws in Ohio, Georgia, and elsewhere, Alexa Kolbi-Molinas, senior staff attorney at the ACLU Reproductive Freedom Project, told Vox. “We will absolutely make sure that abortion remains legal in all 50 states as it is today.”

In signing the bill last week, Alabama Gov. Kay Ivey noted that it was all but certain to be challenged in court.

“No matter one’s personal view on abortion, we can all recognize that, at least for the short term, this bill may similarly be unenforceable,” she said in a statement. “Many Americans, myself included, disagreed when Roe v. Wade was handed down in 1973. The sponsors of this bill believe that it is time, once again, for the U.S. Supreme Court to revisit this important matter, and they believe this act may bring about the best opportunity for this to occur.”

IMO this was bad timing.

It was bad timing to run an abolitionist for President in 1860.

But if Breckinridge had won the Left today would be either gushing about how great he was or how terrible he was.

Unfortunately they are now.

Very bad timing. The best we can hope for is that the Supreme Court will not take up the case. If it does, there’s not much doubt that it will uphold its precedents and kill the possibility of challenging them again for a decade or more. Kavanaugh made it clear that he agrees with Kennedy’s position in Casey, and regards that as the precedent on the question of precedents. That makes it at least 5-4 against, and Roberts’s answers on precedent during his confirmation made me believe he would probably be a vote against too, so it’s 6-3. We need at least one, perhaps two more confirmations before this evil will be ripe for defeat.

The best we can hope for is a Trump reelection next year and some SCOTUS vacancies for him to fill in his new term. The Alabama case won’t get to the Supremes for at least a couple years, if they even take it up.

The best time to start fighting back against creeping institutionalized infanticide was fifty years ago.

The second-best time to start is now.

When the progressive fascists legalized post birth abortions, AK infanticide, this bill is the logical response.

Where have they actually legalized post-birth “abortion”? Some of them have recently talked about it, but to the best of my knowledge they’ve never done it anywhere.

From conception, it’s homicide. From around one month, it’s genocide. Affirmative action to save selective-child, and recycled-child, too? The wicked solution.

Elective abortion (i.e. selective-child) is only legal until the child is “viable”, right? Gosnell’s little chamber of planned abortions is no longer a choice.

Yeah, well in Albuquerque NM, you can obtain a late term abortion if you have the cash as long as you’re not in labor.

And in the state of New York, under their newly minted abortion law, a woman can abort their child right up to the moment that it is born. And then there are some that think that under the New York law it is not a criminal offense to kill (sorry, “abort”) the baby post-birth if the mother decides the infant will be too much of an inconvenience.

No the NY Times just ran an article about how pregnancy kills, abortion saves lives written by a late term abortion specialist.

Elective abortion (i.e. selective-child) is only legal until the child is “viable”, right?

No. It depends on the state. In many states it’s completely legal right up till baby clears the birth canal.

In New York the legislature cheered a bill that allows abortion at 9 months. Same people who will attack you for wearing a fur coat or wearing leather. Many people in the animal rescue movement will go all out to save a stray dog or cat, don’t have the same feelings for a human.

It blows my mind that the same people that cry over ASPCA commercials, support big fines for disturbing sea turtle nesting areas and want criminal prosecution for logging in the Pacific Northwest absolutely love murdering the unborn.