Who is ‘Titania McGrath’ and why do woke liberals hate *her* so much?

Who is ‘Titania McGrath’ and why do woke liberals hate *her* so much?

Tucker Carlson Interviews the Man Behind the Parody Twitter Celebrity 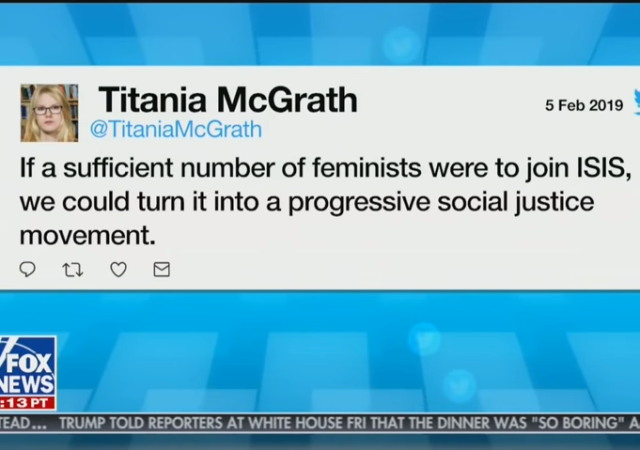 If you spend any time on Twitter, you have probably seen tweets by Titania McGrath, a young woman who is so ‘woke’ that she often comes across as a parody of progressives. It turns out that’s exactly what she is, and the person behind her is a man.

Titania is the brainchild of a comedian named Andrew Doyle. He was interviewed by Tucker Carlson on Friday night.

Phillip Stucky of the Daily Caller has details:

Doyle, whose book “Woke” will be released September in the United States, claimed to have created Titania as a way to troll feminist activists because of what he called their inability to take a joke.

“Part of the point of the character she is po-faced, very sort of privileged woman who still think she’s this oppressed, modern day feminist who believes in a nebulous thing called the patriarchy,” Doyle explained about his online persona.

“She never laughs and never has a sense of humor, one of the reasons I wanted to poke fun at the whole ‘woke’ movement is it can’t have a joke. Can’t handle a joke constantly looking to be offended by absolutely anything even when there is nothing to be offended about. Of course, the ‘woke police’ aren’t going to like this book. The fact that they don’t suggest I’m doing something right.”

Here’s a selection of recent tweets from McGrath:

Heteronormativity begins in the womb with the assumption that every sperm wishes to fuse with an ovum.

I believe in free speech, so long as the state is allowed to arrest those who say the wrong things.

Heterosexuality was invented by patriarchs as a means to justify their subjugation of women.

Anyone who has ever claimed that Jussie Smollett is guilty must now be prosecuted.

Lying about hate crime can never be permitted in a civilised society.

Gender is a destructive social construct, and the best way to prove this is to construct as many new genders as possible.

The only way we can stop fascism is if the police are allowed to arrest people for what they say and think.

The reason McGrath fooled so many people is that Andrew Doyle is simply too good at his job.

Pinning something on anyone who isn’t actually guilty is never funny. Whether it’s a hate crime hoax, or an attempt to make a person or movement look like racists or madmen, or just a lie about something DJT didn’t actually say. Teen—very young teens—think this stuff is clever. Adults really should know better.

This guy is about as funny as those shits who photoshop people holding MAKE AMERICA GREAT AGAIN banners so they seem to say MAKE AMERICA WHITE AGAIN. Yep, a real laugh-riot.

Otherwise, take another shot at it and tell us what you’re thinking.

Titiana McGrath is the best thing to happen to Twitter since Iowa Hawk.

but she identifies as a woman? So what’s the problem?

That is womyn, because no ‘wo’ likes to be joined to a ‘man.’

I can think of a better 2-letter abbreviation, but this is a family blog. 😉

I can’t tell you how many times I had to tell my conservative friends on social media Titania was a parody account. Once they learned that, they all became fans.

I replied to something from “her” today, not having read this post yet!

Silly me…..now I know, it is hilarious!! Sad, though, because those comments are so like the REAL SJW femi-nazis…….very on-point. I sure could not tell!!

Glad to know a bit more of Tatiana’s herstory. I respect her(?) more now.

And the fact that people don’t realize it’s a parody account tells everything you need to know about the level of derangement on the left.

It looks like many on the right don’t get it either.

What is missing here is information about how many retweets “her” tweets received. And did any high-visibility leftist retweet any of “her” tweets?

Memo for tom_swift: My cordial advice is to take a stool softener and have a good crap–trust me, you’ll feel better and it’ll give you a sunnier outlook on life.

In order for parody to be effective, it has to be identifiable as a PARODY. In the Case of Titania, this is impossible, unless one already knows that the character is a parody. Unfortunately, it is impossible to parody today’s liberal/Progressives, because, no matter how outrageous the statement, it still sounds like it came from an actual liberal/Progressive. And that is really, really sad.

Which is a way of saying that progressive thought is already indistinguishable from parody, and is therefore a type of comedy.

Certainly deliberate- since titanium is an extremely strong metal, coupling it with white………

Titania is also the name of the Queen of the Fairies in A Midsummer Night’s Dream.

I don’t know where this came from, so can’t give credit. Mildly amusing.

Since some members may be more than a little interested in
metallurgy I thought the enclosed (of unknown origin) might be worth
printing. Tin is the layman’s general term for what the expert would
call “metal”. There are many different kinds of “tin”.

BRASS is a very useful sort of Tin. It is mined in Yorkshire, and is
said to occur wherever there is muck. Out of Brass we make Monkeys,
Knobs and Money.

NICKEL is the sort of Tin used for making American money.

LEAD is a very heavy sort of Tin, used mainly for making the middle
of pencils and poisonous paint for children’s toys. It is also used
for roofing churches which last for hundreds of years because the
heavy Lead stops them blowing away.

STEEL is what people do to the Lead on church roofs.

ALUMINUM is a very light sort of Tin, often used for supporting
chimneys. Specially shaped hooks called Aerials anchor the chimney
to the sky and stop it blowing away. They also attract lightning
which is made from electricity, which is what makes television work.
Aluminum is obtained from milk where it floats to the surface forming
a skin.

WIRE is a very thin sort of Tin. It is often used for making fences
because it is so thin you can see right through it.

MERCURY is a very runny sort of Tin, often confused with water. It
has the remarkable property of getting longer when it gets hot and
is thus ideal for making thermometers. Scientists are trying to
reverse
this effect, i.e. making the Mercury get hot when it gets longer in
order to solve the worlds energy problems.

IRON is a very flat sort of Tin, used for taking small creases out
of shirts and for putting big ones in. Another sort of Iron can be
used for gluing bits of Wire together.

RUST is a very crumbly sort of tin, ideal for making Motor Cars.

CHROME is a very shiny sort of Tin, used for holding Rust together.

COPPER is a dark blue variety of Tin, used as an inert filler for
Panda Cars and Football Stadiums (Stadia?)

TUNGSTON, SODIUM and STRONTIUM are light sorts of Tin. Tungston
grows from bulbs, Sodium grows on long stalks at the side of the
road. Strontium is not as light at Sodium and Tungsten and only
glows feebly in the dark. Fitted to a wristwatch it enables you to
tell what time the lights went out.

BARIUM is an edible sort of Tin, fed only to hospital patients
suffering from transparency.

GOLD is a very soft sort of Tin, much too soft to be of any use.

MAGNET is a very attractive sort of Tin, which always points North.
This special property makes it ideal for propelling ships.

URANIUM is a very hot sort of Tin containing little gadgets called
Atoms. This unique property makes it suitable for manufacturing
electricity and other kinds of explosives.

SILVER paper is an alloy of Tin and cardboard, widely used in the
packaging industry.

ZINC is a zort of Tin used for washing Potz and Panz.

TITANIUM is a very strong sort of Tin used to reinforce ladies
undergarments.

I must admit I was fooled when I first saw Titania’s twitter feed.
Can you blame me? Its loaded with so much feminist/intellectual/super woke doublespeak it sounds like every other feminist scold on Twitter!
Its brilliant.
I have no doubt the fun police on Twitter is working on some way to kick Mr. Doyle off their site…

This is really funny. Maybe we need a network of people doing the same? I have always loved zingers.

I don’t use twatter, but saw the interview. Found it hilarious. I understand why conservatives might miss the fact it is parody…

I’m more interested in knowing how many lefties didn’t realize it was parody and ate it up. When your politics are indistinguishable from parody, there’s a problem with your politics. Parody is supposed to be derivative. This appears to be an example of parody that is merely imitation. The fun exists in knowing that the author wrote what he and others perceive to be utter nonsense knowing that it would find approval among those who find it “progressive.”