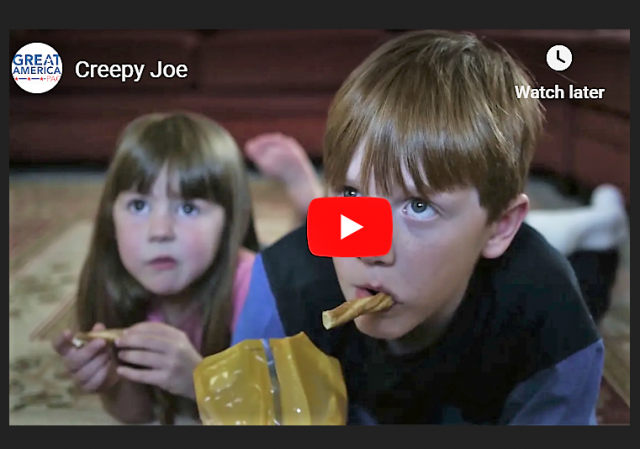 This is not good news for Joe Biden, who hasn’t even announced a 2020 run yet.

Biden’s Tactile Politics Threaten His Return in the #MeToo Era

Joseph R. Biden Jr. came up in politics as an old-school backslapper whose greatest strength was his ability to connect. He doled out handshakes and hugs to friends and strangers alike, and his tendency to lavish his affections on women and girls was so central to his persona that it became fodder for late-night television jokes.

But the political ground has shifted under Mr. Biden, and his tactile style of retail politicking is no longer a laughing matter in the era of #MeToo. Now, as he considers a run for president, Mr. Biden is struggling to prevent a strength from turning into a crippling liability; on Tuesday alone, two more women told The New York Times that the former vice president’s touches made them uncomfortable…

The thing that makes this inescapable for Biden is that everyone has seen so many pictures and videos which mirror the allegations. The Times reports on the two new accusers:

The list of women coming forward is growing. Caitlyn Caruso, a former college student and sexual assault survivor, said Mr. Biden rested his hand on her thigh — even as she squirmed in her seat to show her discomfort — and hugged her “just a little bit too long” at an event on sexual assault at the University of Nevada at Las Vegas. She was 19.

Ms. Caruso, now 22, said she chalked up the encounter at the time to how men act, and did not say anything publicly. But she said it was particularly uncomfortable because she had just shared her own story of sexual assault and had expected Mr. Biden — an architect of the 1994 Violence Against Women Act — to understand the importance of physical boundaries.

“It doesn’t even really cross your mind that such a person would dare perpetuate harm like that,” she said. “These are supposed to be people you can trust.”

D. J. Hill, 59, a writer who recalled meeting Mr. Biden in 2012 at a fund-raising event in Minneapolis, said that when she and her husband, Robert, stepped up to take their photograph with the vice president, he put his hand on her shoulder and then started dropping it down her back, which made her “very uncomfortable.”

A pro-Trump super PAC is already taking advantage of this situation and has created an ad called “Creepy Joe.”

Jonathan Easley reports at The Hill:

A top super PAC supporting President Trump’s reelection campaign will release a new advertisement on Tuesday taking aim at the controversy around former Vice President Joe Biden, who has been accused by two women of inappropriate touching.

The Great America PAC is putting six figures behind a digital ad called “Creepy Joe.” The ads will also run on television if Biden gets into the presidential race, as expected.

The ad features images of children watching an interview between CNN’s Jake Tapper and Nevada state legislator Lucy Flores, a Democrat who accused Biden of inappropriately smelling her hair and kissing the back of her head at a campaign event.

Watch the spot below:

That’s pretty brutal. Biden hasn’t helped himself by not appearing in any media interviews to refute any of this. The silence of the Obamas is also rather conspicuous.

So where were videos like this when Bill Clinton was groping women, and dipping his cigars in their Hoo-hah, not to mention raping them? Oh, I guess YouTube hadn’t been invented yet. Too bad…

Well, that is horrible, but consider what they did to Kavanaugh and Roy Moore, they threw the first punch.

He wouldn’t be the first president with a hair fetish. Millard Fillmore was a notorious hair sniffer.

The Repubs and pro-Trumpers should stay out of this one as much as possible.

The Democrat Party is reaping what they have sown. And the people behind this sudden, co-ordinated campaign against Biden are likely to have done far worse than any of this.

Kamala Harris, for example, is by all accounts a voluntary, enthusiastic ho. Linda Sarsour thinks physical, sexual mutilation of women is just fine, and has said so. Harvey Weinstein got away with using his business position to get sex, for years. In that party, Joe is mild.

The only reason Joe hasn’t been stopped from this behavior is that the men and women in the Democrat Party around him did not object. There is film of protective grandparent behavior available on video, too.

Be careful where you take this one:

In some ways male circumcision is the same thing. No reason to mess with anyone parts.

Let nature and God handle it otherwise it is all mutilation. I understand the intent is more cruel with women, I still think it should not be done for anyone.

When someone pulls the pin on a hand grenade, the only prudent move is to exit the room. The Dems can fully self-destruct with no need for the right to pile-on. That can only be a distraction. The best action for any right leaning web site is to provide URLs to where the story is being reported on a left leaning source.

Twenty years ago this story about Biden would have gotten zero traction in the media. At that time journalists took the much worse accusations against Clinton and turned him into a folk hero by claiming he was the true victim.

But in the Intersectional 21st century, it will go much worse for Biden than for Clinton. He is a white heterosexual male – a true Satan in Progessive Theology.

The ONLY reason this is gaining any traction is because the Obamas or Clintons or both are behind this. Biden is out, they have their hand picked candidates and will be working to kill off as much of the remaining field as possible.

Biden is the first to go. Next they will set up things against Bernie, but that campaign will be tougher to get done.

You will see the field of candidates shrink, the DNC can’t afford to have Biden or Bernie run. They will take them out.

A pro-Trump super PAC is already taking advantage of this situation and has created an ad called “Creepy Joe.”

A tactical blunder. It makes it easier for Camp Biden to discount all the evidence as the work of pouncing Republicans.

Yea, was thinking the same thing. But need to keep pivoting it to Sanders.

Biden has been one of the most corrupt politicians out there. The DNC knows this, and some is already coming out. And it’s far too early for the really bad stuff.

The Republican party is attacking a lifetime swamp creature? How is this possible?