Second Biden Accuser Comes Forward: “This is Al Franken all over again”

Second Biden Accuser Comes Forward: “This is Al Franken all over again”

Alleges 2009 incident: “He put his hand around my neck and pulled me in to rub noses with me. When he was pulling me in, I thought he was going to kiss me on the mouth.” 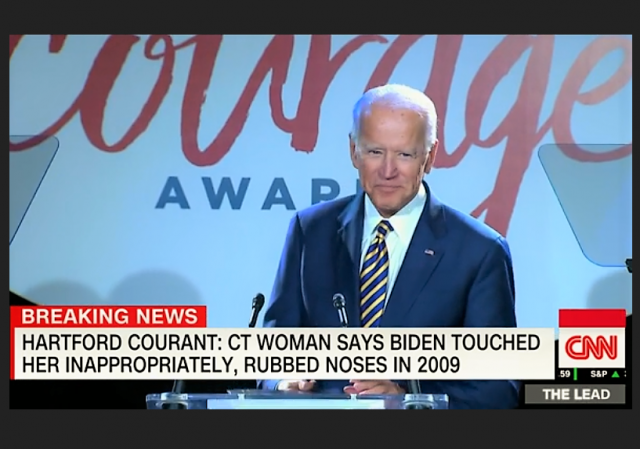 A second woman has come forward accusing former Vice President Joe Biden of inappropriate touching at a fundraiser in Greenwich, Connecticut in 2009.

According to the Hartford Courant:

A Connecticut woman says Joe Biden touched her inappropriately and rubbed noses with her during a 2009 political fundraiser in Greenwich when he was vice president, drawing further scrutiny to the Democrat and his history of unwanted contact with women as he ponders a presidential run

“It wasn’t sexual, but he did grab me by the head,” Amy Lappos told The Courant Monday. “He put his hand around my neck and pulled me in to rub noses with me. When he was pulling me in, I thought he was going to kiss me on the mouth.”

Lappos posted about the alleged incident on the Facebook page of Connecticut Women in Politics Sunday in response to a similar account by former Nevada legislator Lucy Flores, which comes as Biden is considering a 2020 run for president. Flores accused Biden of kissing her on the back of her head in 2014, when she was a candidate for lieutenant governor.

Lappos, 43, who is now a freelance worker with nonprofit agencies, said she felt extremely uncomfortable when Biden approached her at the 2009 fundraiser for U.S. Rep. Jim Himes, D-4th, where she was volunteering. At the time, Lappos was a congressional aide to Himes, who she said was not in the room when the incident took place.

Lappos claims she never filed a complaint, “because he was the vice president. I was a nobody.”

“I never filed a complaint, to be honest, because he was the vice president. I was a nobody,” Lappos said. “There’s absolutely a line of decency. There’s a line of respect. Crossing that line is not grandfatherly. It’s not cultural. It’s not affection. It’s sexism or misogyny.”

Biden’s camp has not issued a comment but did release a bizarre statement meant to address the first accuser:

“In my many years on the campaign trail and in public life, I have offered countless handshakes, hugs, expressions of affection, support and comfort. And not once – never – did I believe I acted inappropriately. “If it is suggested I did so, I will listen respectfully. But it was never my intention. I may not recall these moments the same way, and I may be surprised at what I hear. But we have arrived at an important time when women feel they can and should relate their experiences, and men should pay attention. And I will.”

Professor Jacobson blogged about this, exactly, last weekend when he asked, “How can Democrats back Joe Biden for president when they jettisoned Al Franken as a Senator?”

NEW: I just spoke with Biden’s latest accuser who told me adamantly that the former Vice President should not run in 2020.
“This is Al Franken all over again,” she told the examiner.

This nifty little compilation of Biden making young girls uncomfortable should be the beginning of the end of his campaign. It won’t, it should be though:

I do love how this crap is biting Dems.

“Speaking on the condition of anonymity, the agent asserted that, “We had to cancel the VP Christmas get together at the Vice President’s house because Biden would grope all of our wives and girlfriend’s asses.”The annual party was for agents and Navy personnel who were tasked with protecting the Biden family.”

Nobody can be surprised by this, we’ve all been watching this go down for years and years. The video evidence of his creepy groping is all over the place.

The old guard progs are shitting themselves now, realizing that the Marxist Children-of-the-Corn that they’ve unleashed are turning on them now.

I need more butter for my popcorn, and maybe a box of Milk Duds to go with it.

What the hell relevance do ‘accusers’ have?

VIDEOS of this crap have been around for years and nobody has cared.

This is a video of him creeping on young girls:

None of this is candid video or secret records. This is from official video and photo shoots.

If they had video like this of Trump they would have been calling him a pedophile every breath of every day.

But because its Biden the Washington Compost today referred to it as his ‘affectionate physical style’.

I understand that The View has already excused Joe Biden and Whoopi Goldberg in particular doesn’t want him to stop being a hands-on politician, comparing it to what Trump supposedly admitted doing. (That’s not what he said per se, but society is long past questioning the tale.) So far, exactly as I called it. And it wasn’t exactly one of my masterpieces of deduction.

I don’t know why we have to perpetuate stories we know are lies.

DJT was the boring guy watching it all.

Thanks, I didn’t actually know the reference, only that Trump didn’t say what he’s accused endlessly of having said (not like that is new).

Right. And Tammerlane (notorious for sacking major cities and stacking up pyramids of human skulls) was just an ambitious extrovert with an interest in architecture.

Loved the write up about one of the great Khans. It’s like you know me.

What defense does Biden have? We have him on video. I’m not the sharpest tool in the shed. Anybody who knows me will tell you that. But I don’t feel up girls without their permission. I certainly don’t do it in public.

And, ladies, you are all beautiful. When I look at a woman I know there is a God. And He wants me to be happy.

Probably Kemala Harris could get away with it politically. I can’t.

Are the Obamas behind this to clear the way for Mrs. Hussein? Or The Clantons?

That’s my guess too. Biden’s being defenestrated; he’s too old, too white, and insufficiently woke, so he’s getting a shot across the bow telling him he’s not wanted.

Still, he doesn’t seem to listen very well, so who knows? Maybe he’ll keep on going- but if he does, don’t be surprised if he commits suicide with two bullets to the back of his head!

Biden is not the choice of either Obama nor Clinton. He is going to be hammered by both sides.

Next up will be Warren once Biden is gone, Hillary wouldn’t abide with Hillary Lite being given a chance.

The two powers are not in agreement, so expect even the favored by them to get back stabbed by the other. The Obamas and Clintons are not friends, and they will be taking this nomination quite personally.

Ding, ding, ding. Give that commenter a cheroot. There is only one reason the in-your-face Obama’s have been quiet for two years…they are sowing the seeds of this chaos so Mooch can ride in and save the party.

Whatever you think of Joe Biden, you’re giving credence to leftism if you emphasize “scandals” like the new one, unless you’re affirming a traditional ideal about how people are to interact physically. “Should” is good, but “using an opportunity to make fun” is feeding the beast.

“‘It wasn’t sexual, but he did grab me by the head,’ Amy Lappos told The Courant Monday. ‘He put his hand around my neck and pulled me in to rub noses with me. When he was pulling me in, I thought he was going to kiss me on the mouth.'”

Why do you think she “came forward”? Is she a “survivor”?

I’m not sure that anyone is doing that. As far as I know, Biden has not been charged with a crime.

This is for the Left to police by their own rules and decide if they want to be politically consistent or just politically convenient. (although they’ve already taken the convenient route a few times in my home state of VA)

The question becomes will they have old joey fall on his sword for the team or just let him get primaried? We have the luxury to sit back and watch.

No one had to come forward to know joe biden is a creep. Look at the poor little girls he has pawed over the years. The “help me” look on their faces while their dolt leftist parents fawn all over creepin’ joe. Jeff Sessions saw gropin’ joe going in on his granddaughter and slapped that pervert’s hand away. Good bye joe, hooe you enjoy getting your a$$ kicked behind the woodshed by all the #meetoo’ers

It will be interesting to watch all the Dems adopt the Mike Pence rules that they derided earlier. Don’t touch women except for a handshake, and take your wife along if you need to meet with a woman or have dinner with her. But no matter how careful you are, there may be a delusional woman who will imagine that you wronged her somehow many years ago.

Don’t forget that Biden was picked mainly as a means to prevent impeachment, he was protection for Obama and a distraction.

Biden is a malignant clown and a rotten remnant of the establishment crud clogging our system.

We’re desensitized by constant saturation in instant hysteria about any number of (usually) harmless things, but still, looking at these pictures, I see no way anybody in a modern country could dismiss that old creep’s grotesque groping as OK.

It’s not yours, Joe, so keep your mitts off.

Franken may have thought he was being hysterically funny, which might be an excuse, though badly misplaced. But it’s not one Biden can claim. He’s not a comic, he’s that guy all the women avoid on the subway.

Oh, my! We never, ever saw this one coming! Eek!

They can’t accuse their own party members of bringing forth women to complain, so they’ll blame it on the cartoonists.

I think I saw this predicted yesterday, due to the proliferation of Biden jokes amid the CNN jokes.

The unholy socialist sisters, who managed to get Smollett exhonerated are behind Joe’s tar and feathering. It starts with Harris and runs right back to Michelle by way of her aide de camp. I hope Joe’s smart enough to bail before any more us sluung at him.