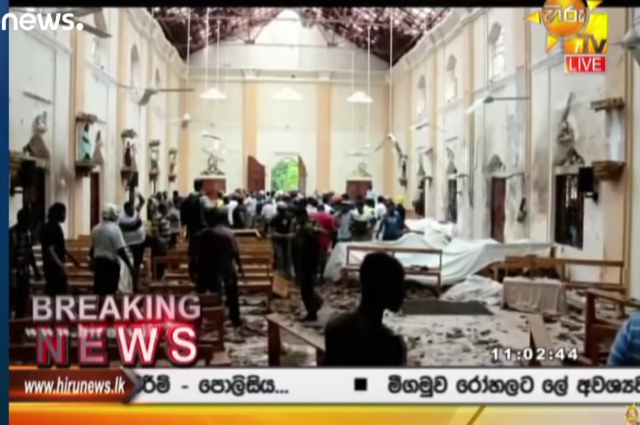 Around 290 people have been killed and 400 injured in a series of suicide bomb attacks in churches and hotels in Sri Lanka, government sources say. Three churches were targeted during the Easter mass, including the landmark St. Anthony’s Shrine, an 18th century Catholic Church.

This is the first terror attack of this magnitude on Christians in Sri Lanka, a war-torn island nation in the Indian Ocean. Christians form the smallest religious minority in the Buddhist-majority country. A large portion of Sri Lanka’s seven percent Christians are Catholic.

The names of the two identified suicide bombers point to an Islamist connection. “The attack at Shangri La hotel was carried out by suicide bomber Zahran Hashim, while Abu Mohammad has been identified as the attacker at the Batticalao church,” Indian TV network CNN-News18 said.

At least 35 foreigner nationals, including U.S., British and Dutch citizens were among the dead, Sri Lankan news agency LUSA reported.

Indian broadcaster CNN-News18 reported the details of the terror attack:

A series of eight devastating bomb blasts ripped through high-end hotels and churches holding Easter services in Sri Lanka on Sunday, killing over 180 people, including dozens of foreigners. Worshipers were targeted at the Kochikade, St Sebastian and Batticaloa churches during mass, while the other locations were Hotel Shangri La, Cinnamon Grand and Kingsbury hotel. After a few hours, two more explosions were reported in the suburb of Orugodawatta and Dehiwala.

In just one church, St. Sebastian’s in Katuwapitiya, north of Colombo, more than 50 people had been killed, a police official told Reuters, with pictures showing bodies on the ground, blood on the pews and a destroyed roof. Media reported 25 people were also killed in an attack on a church in Batticaloa in Eastern Province.

The NY Times reported on the locations:

Images from the site of the bombings showed bloodied and shattered pews and victims lying on the floor of houses of worship. The walls and windows of the targeted hotels were blown out.

Some of the victims were killed as worshipers gathered for Mass at St. Anthony’s Shrine in Colombo, the capital; St. Sebastian’s Church in Negombo, about 20 miles north of Colombo; and Zion Church in the eastern city of Batticaloa, officials said.

Several world leaders, including the Pope, condemned the terror attacks. “I wish to express my heartfelt closeness to the Christian community [of Sri Lanka], wounded as it was gathered in prayer, and to all the victims of such cruel violence.” Pope Francis said at the Easter address in St. Peter’s Square.

138 people have been killed in Sri Lanka, with more that 600 badly injured, in a terrorist attack on churches and hotels. The United States offers heartfelt condolences to the great people of Sri Lanka. We stand ready to help!

Sri Lanka had declared a state of emergency last March after bloody clashes between Buddhists and Muslims across the country. The tensions first began in 2017, after Buddhists accused Muslims of forcibly converting locals to Islam, and desecrating ancient religious sites. Buddhists make up for about 75 percent of the population, while the Muslims count for almost 10 percent of the country’s 22 million population.

The government has imposed a nationwide curfew, ordering people to stay home, and a “social media ban” to prevent public unrest in the country.

THIS POST WILL BE UPDATED AS MORE INFORMATION BECOMES AVAILABLE.

And of course, “motive is unknown”.

was it “just some people who did something” or a “tragedy in a place of worship”? I need to know before I can react appropriately.

Sadly these attacks are inevitable because the West refuses to learn the elemental nature of Islam. A refusal in the face of Islam’s clear core instructions found in its source documents, instructions upon which Muslims themselves tell us, over and over, about what they intend to do to us.

Of course the left and the media are complicit with Muslims in making sure that Westerners remain ignorant about Islam, but so too are all D & GOP “leaders” plus this Pope who refuse to call Islam what it is.

Recall Isaiah 5:20 and Scripture’s other warnings, “Woe unto them that call evil good, and good evil; that put darkness forlight, and light for darkness; that putbitter for sweet, and sweet for bitter.”

Agreed. Islam tells it’s followers in detail what to do with non-followers.

Unfortunately I don’t think the West will wake up until one or more European countries actually fall to Islamic rule in the next few decades.

I’m betting that England, Sweden, France, Germany, Spain, and Italy have sharia as their law within 20 years. Islamphobia is being used as an accelerant.

My wife and I just left our Sunrise service at our church, we are still blessed to be able to do this in America.

Prayers for those who remain.

Islam is a violent political ideology wrapped in the guise of a religion.

My wife and I just left our Sunrise service at our church, we are still blessed to be able to do this in America.

Prayers for those who remain.

Islam is a violent political ideology wrapped in the guise of a religion.

Maybe it was a muslim computer.

Islam is not compatible with freedom and liberty. While many muslims are peaceful and do not support the violence, a large number provide support for terrorism and violent acts. Nothing will change until the violence is met with overwhelming non-proportional retaliation.

Why are we continuing to let these killers into our country? PERHAPS if they would agree to these requirements: 1. No welfare EVER 2. No living in segregated (i.e., moslem) communities, 3. Kids go to sectarian (or preferably, Catholic) schools, 4. American clothing only — NO scarves, etc, 5. ENGLISH only, 6. one strike and you’re out.

Skr Lankra has a Muslim minority of less than 10%. What to expect as the Muslim population grows:

I just learned that one of my colleagues was among those killed in the hotel explosion in Colombo. He had traveled there for a business meeting. RIP