“In his selective memory, [the writer] forgets to also mention the thousands of Somalis killed by the American forces that day! #NotTodaySatan” 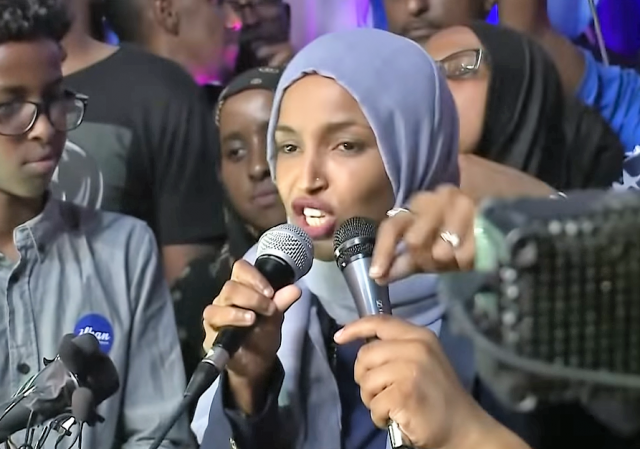 As they say, the internet is forever. In 2017, Rep. Ilhan Omar, a Somali native, was less than kind to the American soldiers involved in the “Black Hawk Down” incident.

The tweet was recently unearthed by John Rossomando at The Investigative Project on Terrorism. 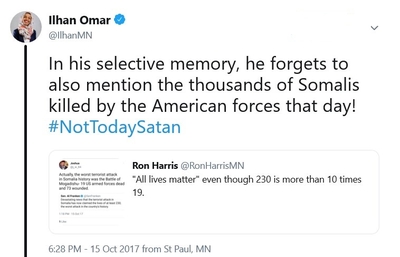 “In his selective memory, [the writer] forgets to also mention the thousands of Somalis killed by the American forces that day! #NotTodaySatan,” Omar wrote while still a Minnesota state legislator.

…Omar’s attack on U.S. soldiers involved in the “Black Hawk Down” incident appears to have gone unnoticed until now.

Her tweet saying that “thousands of Somalis [were] killed by the American forces” exaggerated the Somali death toll and omitted important context.

It completely missed the point of the U.S. involvement in Somalia, retired Chief Warrant Officer Mike Durant, who was shot down in Mogadishu on Oct. 3, 1993 and held captive by the militia loyal to Somali warlord Gen. Mohammed Farah Aidid, told the Investigative Project on Terrorism (IPT). The U.S. military was in Somalia as part of a humanitarian mission to save starving Somalis and protect food and aid from being stolen by warring factions.

Somali casualty counts vary dramatically, in part due to the nature of the battle. But few credible estimates place the figure anywhere near the “thousands” Omar claimed were killed.

Needless to say, the internet is responding in kind:

Weird how @IlhanMN sticks up more for the country she fled than the one she fled to. https://t.co/gffQLbAfwd

Nice to see the true colors
Of #IlhanOmar

You mean the Somali militants that were denying the starving Somali population foreign aid and food, Jesus Christ any excuses to blame America for something in the world, “Satan”? Why did you run for Congress

The US Congress is NOT the UN. She may represent Little Mogadishu but she will get no “empathy” as Hillary says we should when thinking of our enemies. There are some places in the world that need a cleansing x-ray and neutron flux.

notamemberofanyorganizedpolicital in reply to alaskabob. | April 23, 2019 at 1:46 pm

I Fought In The Battle Of Mogadishu. Here’s What Rep. Ilhan Omar Gets Wrong About ‘Black Hawk Down’

Omar enjoys the fruits of American combat deaths, yet she can’t even bring herself to acknowledge the ultimate sacrifice that was made on her behalf.

Or as Ace of Spades puts it: “A US Soldier Who Risked His Live in Mogadishu to Protect Ilhan Omar and Her Clan Invites Her to Drink a Nice Cold Glass of Shut the _____ Up Dummy
—Ace of Spades

We’ve seen her through the ages, wearing many guises. Jiang Qing. Madam Defarge.

Given the chance, she’d be at our throats.

You can’t blame Representative Omar for being angry all the time. Here she was safe and happy and with people who respected her in a nice Kenyan refugee camp. And then the USA (possibly at gunpoint) forced her to come here to this secular, diverse country. That would be sufficient to anger even Mother Theresa.

To be fair, she and her fellows are constantly enraged due to excessive and poorly thought out inbreeding. They cannot help being like rabid animals, and the truth is there is only one effective cure for their condition, a final peace.

She even bred with her own brother if internet reports are true.

One of the new leaders of the democrat party. They must be so proud.

We should have carpet bombed the city to keep our boys safe. The entire country isn’t worth the life of an American serviceman.

Carpet bombed with fuel air devices which totally incinerate 300 meter radius circles. How do we get rid of these POS?

Ripley has the answer. The only answer.

if you look at the situation, bill Clinton changed the mission from a humanitarian one to an offensive one with out giving the troops on the ground the equipment they needed

Why do we bring people here who hate us and want to destroy us and then put them in control of the government?

“We” did not bring them, Obama did and he should be tried for treason for doing so.

Omar and her family came to the U.S. in 1992 and applied for asylum in 1995, so you should be thanking the late George H.W. Bush (president in 1992) and Bill Clinton (president in 1995) for inflicting this particular pestilence on the U.S.

Although Obama later allowed tens of thousands more of her fellow Somalis to flood into the U.S. and hop aboard the U.S. taxpayer-funded gravy train.

Nothing worse that a Islamic Supremest

Truly stupid, inferior and arrogant at the same time.

I read the articles that became the book. Years later, I saw the movie. I decided not to be biased or prejudiced against Omar and assume she would adopt a position against American soldiers if this issue ever came up.

And then she did it anyway, wasting the benefit of the doubt I had offered her.

All over Europe there are endless examples of why it is foolhardy to allow Muslims in Western countries. We should classify Islam as a cult, not allow nonprofit status for anything related to the cult. It is clearly subversive, and there is no shortage of evidence of this.

If Islam was actually superior, Muslims would not have a reason to be fleeing the hellholes they came from. Islam and its practitioners are not superior in any way.

There is no such classification as “cult”. Cults are religions, and have all the same rights as any other religion.

“There is no such classification as “cult”.”

Does the word exist or does it not?

Of course it does. There are then, “cults”.

Merriam-Webster does not create the laws.

You know who thought Islam was superior to Christianity, and wished the Moslems had won at Tours? Hitler.

And Henry Ford. The Muslim presence in Michigan was Ford’s doing.

“Jesus Christ any excuses to blame America for something in the world, “Satan”? Why did you run for Congress?”

Why? To continue the fundamental transformation of America, of course! What are you going to do about it?

Hers is a D+26 district. She’ll be in Congress drawing a taxpayer funded salary of almost $200K a year for as long as she can fog a mirror unless she gets primaried by a slightly less insane Democrat. Good luck finding one of those.

The article quoted used passive language “Omar, a Somali native elected to Congress last fall…” rather than the the active “The voters in Minneapolis elected, as their representative…”

The voters can change this. Oh, wait, this is Democrat territory so maybe an honest election should not be assumed? Or, should I just assume her hate is just OK with the citizens of Minneapolis?

If the Republicans had any sense — a chancy proposition at best — they’d plaster Ilhan Omar and AOC opening their mouths on every campaign advertisement from now until election day 2020.

I’m reminded of this exchange. The answer to Bartlett’s question is obvious: because you’re the president of America, not of Kundu. But even if he couldn’t bring himself to think it, at least he felt it. Omar obviously doesn’t.

Move back to your $hithole.

Of course she did. She went full retard a long time ago.

When minorities hit 218 in the house of reps is civil war pt 2 will be lost won without shot being fired. Then things will really heat up.

Omar is the perfect Democrat Socialist–anti-Semitic, anti-white, anti-Christian, and anti-American. Now we can see why Democrats are so committed to admitting more Islamic refugees; they hope to get more Omar voters.

I live in MN-CD5 Omar represents and I usually see a hijab if I drive a cetain direction through my minneapolis border suburb.

Take a look at Omar and what kind of American she is and ask yourself if we don’t need a wall and MERIT based immigration.

We are doomed to chain immigration as the Somalias will bring the whole country here with it.

“Somalias will bring the whole country here with it.”

And do their best to make America another islamic shit hole.

May the two meet, at a very high rate of speed.