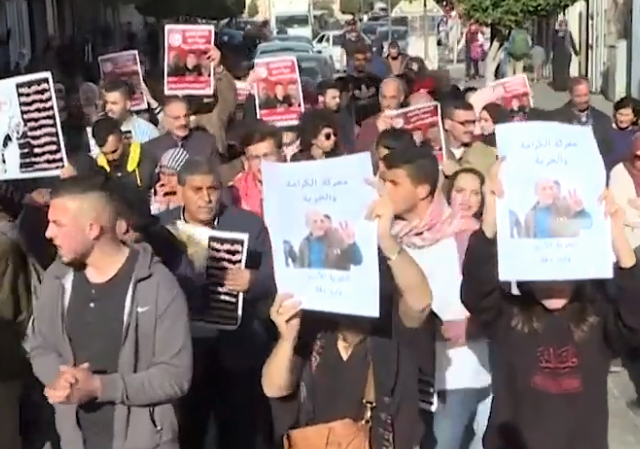 Palestinian terrorists in Israeli prison are commencing a hunger strike. Because Israel has started jamming their smuggled cell phones.

Palestinian security prisoners from Hamas and Islamic Jihad began a hunger strike on Monday despite previous agreements to postpone it.

According to media outlets in Gaza affiliated with Hamas, some 150 men imprisoned in Israel began striking. Hamas’ Prisoners Ministry announced that the five inmates driving the effort began their strike on Monday evening. They are all prisoner leaders, high-status inmates elected by their peers, representing Hamas, Islamic Jihad and the PFLP. Four out of the five are serving life sentences, mainly for carrying out or planning terror attacks.

According to the prisoners’ announcement, the second wave of the hunger strike will take place on April 11, the third on the 13th, and the fourth on the 17th. More prisoners are expected to join the strike with each wave. Prisoners will not eat any food or drink water, which is expected to cause a rapid deterioration in their health.

The trigger for the hunger strike is Israeli jamming of smuggled cell phones, the Times of Israel reports:

Hamas prisoners in Israeli jails launched a hunger strike on Sunday morning to protest the installation of cellphone jamming technology in some prisons that has made it impossible to use smuggled cellphones in the wards.

The leaders of the strike have threatened to escalate the situation by refusing water if their demands for better incarceration conditions and the removal of the signal jamming systems are not met within seven days.

The imprisoned murderers claim the cell jamming equipment could harm their health, according to Al Jazeera:

They say without mobile phone service, they are unable to communicate with their family members, many of whom are unable to visit their jailed relatives.

Prisoners have long called for the installation of payphones, yielding only some results as part of demands associated with previous hunger strikes.

This tactic has worked for imprisoned terrorists in the past, because of the anti-Israel bias of international ‘human rights’ activists and media — If Israel does nothing and the prisoners die, Israel is blamed; if Israel force feeds them to prevent their deaths, it is accused of a human rights violation.

The tactic works only if international attention is generated.

1. It is against the rules for prisoners, in any prison, anyplace in the world, to have their own cellphones.
2. Same applies for Israel, same goes for Hamas terrorists (who usually aren’t doing time for tax fraud).
3. Hamas prisoners aren’t happy about Israel not allowing them to use cellphones. So they smuggle them into jail.
4. How? Sometimes piece by piece. Like an assembly line. Sometimes abusing family visits to smuggle pieces in.
5. Naturally, prison management doesn’t approve this.
6. Why? First of all because rules are rules. But more than that, Hamas prisoners aren’t craving for cellphones to play candy crush saga, I’ll tell you that. Cellphones allow them to keep operating with other Hamas terrorists outside of jail.
7. Take Yahya Sinwar for example. Hamas’s leader in Gaza spent more than 20 years in jail for murdering at least 5 people. During these 20 years he was totally on top of things. He was deeply involved in terror acts going on outside of jail. He was chatty on the phone.
8. So, what can prison management do when the fight against smuggling hasn’t proven to work? Here’s an idea! Use some low tech devices that can jam cellphone signals.
9. Hamas terrorists in jail be like: “this is unacceptable and will bear consequences + we will go on hunger strike to create a mega crisis”.
10. That’s basically it. Only in the Middle East.

Why do they keep doing this?

Because it has worked in the past. What if Israel just said No, and stuck to it?

By all means, let them starve.

Encourage them. Cheer them on. Support them in every way. Under no circumstances should anyone attempt to force them to eat. Don’t even bring any food near them, lest they be tempted to break their vows. Just ignore them if they change their minds – after all, your role is to support them, not let them fail in a moment of weakness.

Not to worry. No known cancer can overtake death by starvation.

We should all encourage these murdering Muslims to abide by their promise to outlast the Israelis or die trying.

Their Allah will be very pleased.

When they die from lack of signal, they get 72 ring tones.

Dude, I shot coffee through my nose, warn a fella before you do that kind of thing. Laughed so hard my ribs hurt.

That company, Virgin Mobile, I don’t think that they do what you think.

Don’t they know cell phones cause brain cancer? Here they are trying to keep them healthy by deactivating the cell phones and all they do is bitch.

If the Israelis were really as evil as the Palistinians claimed, then hunger strikes would be treated as self-solving problems. The very fact they are playing on the mercy and humanity of the people they’re trying to kill tells us the truth.

But think of the savings in food costs!

Are these Millennial terrorists?

Haha….strike away. Bring them some food to turn down on a daily basis.

A hunger strike is near impossible when you are confined. Eventually, your base mentalities will take over, and it’s not as though they can avoid the food in confinement.

Start grilling right outside of their cells.

What a headline! I remember those Palestinian cell phones, from the time they occupied the Church of the Nativity and miraculously were able to communicate over their cell phones, despite being sequestered for far more time than the batteries my cell phone would last.

Yes, we know all about the Palestinians and their claims.

I still want a cell phone with a Palestinian battery. So, will the Palestinians on the hunger strike last like their batteries? The whole world wants to know.

No cells in cells!!

Well. Some will be tempted to eat and may be subject to pressure from the better off. So I suggest we treat all equally. Let them starve.

Something I can agree with them on. Hunger strike to the death!

I have always been of the opinion that “Hunger Strikes” are a self correcting problem.

Personally I would fry bacon, pork chops, and tenderloin 3 times a day.

Put them in Solitary Confinement and check on them once a week. No food, No water, No Cellphones. For fun put them in the same cell as a UN worker.

Outrageous! Murdering savages are not allowed to spew hate over illegal cell phones? Oh, the humanity!

What if the Mossad allowed one of their special cell phones to be smuggled in? The first time a terrorist lost his life using a cell phone would be the last time a cell phone got used in an Israeli prison, bet you money.

No need for a special phone. Just use one of those iphones with the exploding battery.

Eh, I remember the last hunger strike a big shot terrorist went on in an Israeli jail.

All was good until the Israelis got him on hidden camera eating food when he thought no one was watching.

Those sneaky Israelis, the chutzpah of blowing the narrative!

Yeah, I say let them try and put some delicious kebab in front of them every day. Some threats are idle.

In case they change their mind, make sure they can smell some delicious ham sammiches. All day, every day.

Doubt the ham sammy thing will be happening in Eretz Yisrael. Good initiative, candidate, but piss poor planning, as the Marine DIs used to tell me.

I don’t know – they might make an exception in this case.

US prisons would be able to Jam Cell Phones too if it were not for ridiculous FCC regulations. It is insane that criminal can go to prison use smuggled cell phones and actually develop drug addictions. Sometimes I think Cool Hand Luke should be an instructional video. Prisons are just not run right.

This so totally solves so many problems all at once, it’s perfect. I hope Israelis are holding celebratory BBQs around these prisons as we speak, wafting the perfume of victory over them.

I look forward to the Palestinian goatherders winning this competition and showing the Israelis they have no power to make them eat and live in captivity.

Maybe they will also take a vow of silence. One can dream.

I’ve never understood why a hunger strike in a prison is even news. As long as they are provided with appropriate food and water, just document that they don’t eat it and move along. They should have the right to starve to death if they want to!

Why dose Israel have live Palestinian terrorists in Israeli prisons? They need to be thrown off the roof along with the UN and any Human Rights Workers.

What if Israel just said No, and stuck to it?
What if Israel just implemented the appropriate penalty for these folks? Then the smuggled cell phone issue would simply vanish, as would the threat of them leading any future hunger strikes.

The fight against the death penalty (and against adequate penalties, in general) has been one of the most pernicious bits of the culture war.

Meh. Life is full of choices. Let them starve.