Is there a double standard among Democratic primary voters when it comes to diversity? 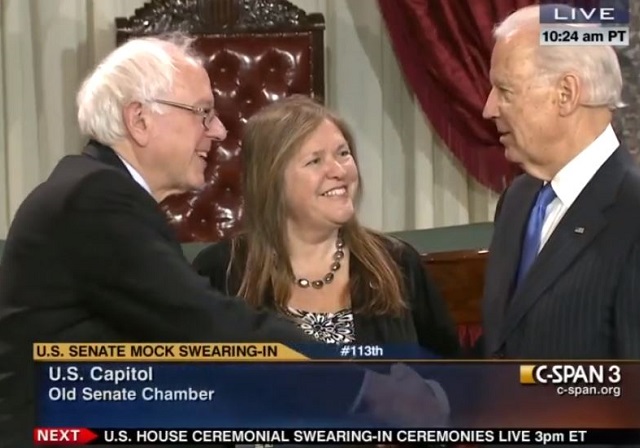 On Monday, Sanders received some pretty big news: For the first time since polling started for the 2020 presidential election, he has overtaken the lead from Biden:

The poll, which was conducted by Emerson Polling, puts Sanders atop the already crowded Democratic field with 29 percent, followed by Biden – who has yet to declare his candidacy — with 24 percent and a surging South Bend, Ind. Mayor Pete Buttigieg rounding off the top three with nine percent.

Besides Sanders plucking the top spot in the poll, the other big news from the Emerson survey was the rise of Pete Buttigieg.

Not only is the Emerson poll welcome news for Sanders and “Mini B” Buttigieg, but Biden has to feel good, too. Though he came in second place in this one, he’s clearly weathered the storms surrounding the numerous accusations of inappropriate touching that have plagued him over the last several weeks.

Also, once Biden officially announces, he’s likely to get a good 4 or 5 percentage point bump out of it on top of the big numbers he’s steadily put up for months.

All of this has to frustrate the identity-politics-obsessed Democrats who believe the path to retaking the White House ideally will involve a minority candidate like Sen. Elizabeth Warren (MA) or Sen. Cory Booker (NJ).

Is there a double standard among Democratic primary voters when it comes to diversity?

“A few months ago, I imagined the top tier looking very different, especially after the 2018 midterm wins and the ‘Me Too’ movement,” one female Democratic strategist said. “It’s still early, but it is a little frustrating.”

Democratic strategist Jim Manley counts himself as surprised and cautions that much could change in the coming months. At the same time, he said “the reality is a lot of these women aren’t seeing much traction right now.”

“I think a lot of what’s happening is despite gains that women have made, they’re still dealing with a lot of latent sexism and double standards both from how voters perceive them and how they’re covered,” said Democratic strategist Eddie Vale. “When one of the male candidates does something intellectual they are smart and new, but when one of the female candidates [talks about their policies], they’re too bland or wonky to connect with voters.”

She didn’t win the election because of misogyny or something, says one professor:

“I hate to say it, but as 2016 showed us, misogyny is alive and well,” said Katherine Jellison, a professor of history at Ohio University and a scholar of women’s studies.

“For some reason, when some people think of a president, they still think of a white male,” Jellison added. “It’s an image they carry around in their conscious or even subconscious mind.”

Here’s what I think is going on: I believe name recognition and sentimentality are the two biggest reasons Sanders and Biden have remained at the top of the pack. Both of them are the most well-known of all the candidates to Democratic voters.

Sanders almost became the nominee in 2016 after he ran a very spirited campaign against Hillary Clinton. Biden, of course, served as President Obama’s vice president. In fact, an obvious theme to Biden’s soon-to-be-campaign will be his emphasis on how his presidency will be an extension of Obama’s.

Plus, Democrats remain enraged about President Trump that they may view Biden or Sanders as more formidable opponents in a general election campaign against Trump than the rest of the Democratic field at this point.

Of course, it’s still early on in the race and much can change. About the only things certain at this point are the continued white-male-guilt apologies, the candidates zigzagging between painting themselves as the most reliably far left Democrat and the consensus-builder who is most able to bridge the vast left/right divide, and their characterizing Trump in the worst ways possible.

As they say, stay tuned.

Whenever I boggle at who manages to survive in politics, I realize it’s the result of one serious oversight. We have no “None of the Above” option. It should be on every ballot, and a victory for “None of the Above” bars the candidates who lost to it from running again.

It’s hard to decipher these polls. I think Democrats are worn out and not impressed with any of their choices and many of them are just sitting it out so far. It speaks volumes that their leading candidate is not even a Democrat. Nor is he a patriotic American. Sanders is simply the most recognizable name among the non-establishment candidates and I think that is what voters being polled are migrating too: the “anyone but establishment” option.

Biden is next because of name recognition and because those people are not yet paying attention. Biden’s troubles are just beginning and it goes far deeper than his creepy cuddling and groping issue. He is as corrupt as it gets. THAT is what the 2016 Trump phenomenon was all about.

Then you look at the rest and when you look at the polling for where voters are on the issues, every one of them is light years out of sync. America is clearly not on board with this extreme lurch to communism as the alternative.

Most Americans aren’t looking for revolutionary changes to our system of government. We are just demanding an end to the corruption and restoration of government by consent of the people, rather than command by an organized handful of globalism-obsessed elites.

Trump by an historic landslide in 2020. The end of the Democratic Party and of the RINO establishment.

Trump by an historic landslide in 2020. The end of the Democratic Party and of the RINO establishment.

While I suspect Trump will be re-elected, I doubt the encrustations of corruption will be chipped away from the ediface that easily.

Think of it as snakes eating the farmer’s pigs. Small snakes eating big pigs are easy to identify by the pig-shaped contours of their bellies. Big snakes? Not so easy. And when those big snakes are actually housed and nurtured by the farmer himself? WTF? What business would you say he is in?

Name recognition certainly does matter, a number of these candidates are simply unknown to the vast majority of voters. Heck a lot of them have not lit up the headlines before outside of the past couple of months! Unless one of these lesser knowns really starts to shine on the campaign trail it likely will be either Bernie or Biden. Warren has the name recognition but I think her Native American fraud identity controversy has tarred her rep to much at this point for her to win. Not to mention she’s just not exciting as a candidate. Her best bet is to stick it out long enough to maybe give herself a chance at some position in the administration if the the Dem candidate were to win.

Warren is not likeable. Even in her home state they aren’t wild about her so much as they are just electing a Democrat.

I think the things being done to Biden are going to end up knocking him out of the race. I see shenanigans starting up against Bernie too. Neither have the blessings of the Obamas or Clintons, so their road to the nomination are not all that sure.

I see Harris or Spartacus gaining traction for the race card and in Harris the misogyny cards to give them a hand up. Nothing like more affirmative action in Presidential elections as a repeat of Obama for the D’s.

I understand that candidates offer ideas on what they would like to see pushed through, but these leftists look to push so much “free stuff” which can’t be paid for that the morons who vote for these mainly due to their own greed or laziness.

I always wonder how they are allowed to get away with their promises. Bribery is a crime, you cannot bribe politicians, police, or even private citizens without it being a criminal offense, yet Bernie spews his BS free stuff as a bribe for the fools who believe they will be cost free to them for their votes. How is that not criminal?

I also wonder how the DNC allows the Independent to run on the Democratic Party ticket when he isn’t a member despite his caucusing with them. He registered D last time and reverted right back to Independent after he was rejected (and somewhat cheated) out of the nomination.

I look at this Democrat field and am sickened by the mentally ill frontrunners and the evil want-to-be candidates. I fear any of them getting elected.

It’s way, way early. This time in 2015, the only candidates breaking into double digits for the GOP were Bush, Rubio, Walker, and Paul.

The extent to which the mayor of a small town in Indiana can rocket up to 9% support with a few gushing articles in the New Yorker suggests that most primary voters haven’t even started paying attention yet.

will involve a minority candidate like Sen. Elizabeth Warren

Super delegates will come to the rescue against Bernie.

“For some reason, when some people think of a president, they still think of a white male.”

Obama is white? Wow. Who knew?

I am surprised that Obama is not selling used cars, or resort property in swamps or deserts.

When I think of Obama, I certainly am not thinking of a President, more a sock puppet.

The book “Stuff White People Like” perfectly sums up the typical white liberal.

During Fox rally last night Bernie kept calling for Medicare for all, big tax on the rich and on and on. Think of how Congress solves problems to make our country better. Immigration: Who thinks this couldn’t be solved in a few minutes? Everybody! Why won’t they solve it? Everyone knows it is because the Dems don’t want to give Trump a victory. Wow. Now think of that kind of negotiating would decide just about every aspect of YOUR life. No thanks give me freedom from DC and let me PAY for my own health care and the ability to vote people out of office.

Yes, yes – the Dumb-o-crats/Dhimmi-crats have their priorities properly-aligned, when it comes to evaluating a politician’s or a person’s worth — ask the truly important questions:

I mean, who cares about such quaint and irrelevant notions as one’s personal character, values and beliefs and professional experience, accomplishment and competence? The Dumbs/Dhimmis have distilled what’s truly important!