“White people. Nobody likes giving up power. And they never see the writing on the wall.” 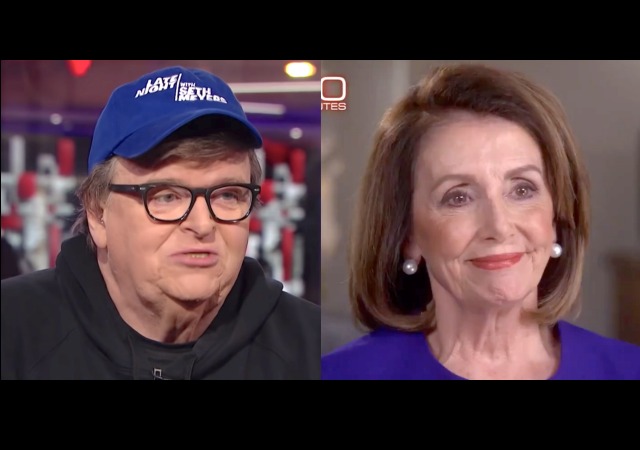 The left continues to eat its own as Speaker of the House Nancy Pelosi tries to squash the rebellion within the Democrat party.

Progressive activist and filmmaker Michael Moore has added to the rebellion after he lashed out at Pelosi when she dismissed those representatives who try to push the party to the far-left.

White people. Nobody likes giving up power. And they never see the writing on the wall. The new day arrives and no one has the heart to tell them they and their old tired privileged ways are over. https://t.co/jAGjzEjLgp

“I do reject socialism as an economic system. If people have that view, that’s their view. That is not the view of the Democratic Party,” Pelosi said.

You know, I really hate it when people force me to somewhat defend Pelosi. As The Washington Examiner pointed out, Pelosi explained to the London School of Economics that “progressives, Ocasio-Cortez and herself are not the reason Democrats won the majority and that the agenda must be ‘culled’ to appeal to swing district voters who sent enough Republicans packing in favor of moderate Democrats in 2018 to put the GOP in the minority.”

She’s right. Thing is, Americans do not care about what color you are, your sex, or what kind of relationship you’re in. We care about the economy, keeping our paychecks, and providing for our families.

Rep. Alexandria Ocasio-Cortez (D-NY) has taken Congress by storm, proudly boasting her socialist views, which she tries to hide by calling herself a “Democratic Socialist.” She is flat out a socialist.

Ocasio-Cortez believes she has a big voice that can persuade people because she’s loud on Twitter and ousted veteran Rep. Joe Crowley in the primary. However, stats showed that hardly anyone turned out in the primary or the general election.

I don’t know how much sway Ocasio-Cortez and others like Reps. Ilhan Omar (MN) and Rashida Tlaib (MI) have on their districts or the American people. The voters rejected Hollywood and the mainstream media when they sent Hillary packing in November 2016.

The far-left have propped up these women, but will it do any good? Look at the polls. Stacey blogged that former Vice President Joe Biden and Sen. Bernie Sanders (I-VT) remain at the top of the polls. The “diverse” crowd falls way behind them.

Will Moore support Sanders if he wins the primary? Sanders is a socialist, but he’s an old white man.

The rebellion will cause many problems for the Democrat party, but so will people like Moore if he and others get their way by forcing the party to concentrate on identity politics instead of the real issues that concern Americans.

Does he realize he’s talking about himself in third person?

He’s on a higher plane of dumb than most people.

notamemberofanyorganizedpolicital in reply to Colonel Travis. | April 16, 2019 at 6:02 pm

You mean he’s Dumber than Dumb?

I bet Moore would produce some fine hams.

Useless trivia: The Michael Moore puppet in TEAM AMERICA was filled with ham before it was blown up.

Well, he IS the size of 3 people

And likely eats enough for 3 too

“I do reject socialism as an economic system. If people have that view, that’s their view. That is not the view of the Democratic Party”

Biden isn’t even a candidate, and Bernie very definitely is a socialist. In other words, the strongest Dem candidate, by far, is an outright socialist. This does not mesh well with any claim that socialism is not the economic system of the Democratic party.

There was a question raised by the DNC awhile ago asking why Bernie was even allowed to run in the D primaries since he’s not a D. Would that the D’s exclude him and he ran as an independent in 2020.

If Dems were smart, they would force the socialists to form their own party. They are not6 that smart.

The Dems need the socialist wing as they don’t have the numbers otherwise to have power. This is a dance between them, and AOC and her brand, along with Uncle Bernie with their open stance on socialism are going to make it difficult for the National Socialist Party as the secret will be too out in the open for their liking.

Has she? Or has the media helped to make her more than she is and now the Democrats find themselves victim of the same media they counted on to help destroy Trump?

About Michael Moore – the terms “one hit wonder” and “one and done” come to mind with him … everything since Roger and Me has been a swing and a miss for trying to replicate that success and remain relevant.

The Fat Fraud attacking the Wicked Witch of the West. Time to stock up on popcorn and beer (anything but Bud).

That’s what the National Socialists said to the Jews. And rabid diversity, too. #HateLovesAbortion

The journolist said to the warlock.

The Pro-Choicer said to the baby… fetus.

If ‘white privilege’ is a real thing, how come everyone on the left desperately tries to find some aggrieved minority to claim to be a member of? Looking at you, Liz Warren, and mayor Pete.

White privilege is all about whites footing the bill for truly dull people to live a disreputable life of leisure, where they reproduce on our dime.

White Privilege is also about driving People Of Color into Food Deserts by consuming every calorie within 100 miles of wherever Jabba The Hutt travels.

Why does this porcine pettifogger get any press at all? He is not worthy to be a pimple on a working persons butt.

Can we just roll his fat a$$ in flour and be done with him,

maybe when the power plants get shuttered and the wind doesn’t blow, we can boil Fat Mikey down and use the oil for our lamps.

his blubber could light a small town for months

AOC did not take congress by storm. Media created her popularity and subsequent meteoric rise. This is part of the kingmaker manufacturing process.

Media writers and photog’s are lazy. Covering AOC is a cinch. Her district is a scooter ride away from their homes and workplace. Three hours notice and she’s in a NYC green room ready to go. Zero effort and expense to cover her 24/4. For the same reason this is why media loved Trump through the 2015 primaries and election cycle – zero effort to cover him.

Don’t underestimate the effect… they created Obama in much the same way and we ended up with that national nightmare for 8 years.

Obama, Trump and AOC were created by the media at the beginning of their campaigns. Obama for the win, Trump so that Hillary could win and AOC so that socialism could win.

Obama’s being investigated now, Trump won (in his own right) and AOC is stepping all over herself and reminding everyone about the lovely days back in the ussr. Shouldn’t the media be retired to pasture (or sent to the glue factory) on that kind of record?

I think you guys made a mistake and mixed in another picture of a walrus with this article although it is weird that the walrus is wearing a hat and glasses.

Then Michael, please give up all those comforts afforded you by inventions of the white man and capitalism/free market. No more travel by car, train, plane. No more modern medicine for you! Better stop using that computer, TV, smart phone. No more air conditioning, freezers, refrigerators, microwaves (oh no!).

He actually has a carbon assprint.

I wonder at which one of his several houses had the writing on the wall? Hypocritical tub of goo.

That’s not how power works. If someone gives it to you they can take it back.
Ours is a world governed by the aggressive use of force. If you want it you will have to earn it by taking it.

When did self-loathing become a virtue?

Was it an old tired fat white privileged millionaire who said the old tired privileged ways of white people are over?

Q: What’s the most dangerous thing you can do around Michael Moore?

A: Get between him and a box of Krispy Kremes.

Babylon Bee utterly ruined me for polite conversation whenever the phrase “Democratic Socialism’ comes up. I can no longer keep a straight face and prevent myself from snickering uncontrollably.

Who the heck cares what that Fat-F has to say …

If I offer him a semi truck load of Twinkies will he go away and never come back?
Rich, fat old white dude needs to give away all his money, all his homes and become a homeless person to atone for his past sins.

That wouldn’t carry him until Easter Sunday Brunch

And yet the only countries everyone in the world wants to live in are those founded by whites and based on their “ways”….hmmm

Moore saying he is tired of a corrupt hack like pelosi is the pot calling the kettle black.

I keep wondering when the LGBTQwerty part of the Democratic Party will go to war with the Islamic wing. It will be ugly, but so far its been kept at bay.