Media Jumps On Debunked Lie: No, Trump Did *Not* Call Asylum Seekers “Animals”

Media Jumps On Debunked Lie: No, Trump Did *Not* Call Asylum Seekers “Animals”

There they go again. The Democrat media just can’t seem to help themselves when it comes to President Trump.  Too many this weekend jumped on a #FakeNews story that was debunked a year ago about Trump calling illegal aliens and asylum seekers “animals.”

Stacey wrote about Democrat and 2020 presidential hopeful Robert “Beto” O’Rourke’s casual lie about Trump calling all illegal aliens “animals.”  The president, of course, said no such thing and was clearly referring to the violent criminal gang MS-13.

Trump did not describe asylum seekers as rapists, criminals, animals. He was talking about murderous gangs like MS-13. Here’s what he actually said in May 2018 (bolded emphasis added for context):

[Fresno County] Sheriff Margaret Mims: Thank you. There could be an MS-13 member I know about — if they don’t reach a certain threshold, I cannot tell ICE about it.

The President: We have people coming into the country, or trying to come in — and we’re stopping a lot of them — but we’re taking people out of the country. You wouldn’t believe how bad these people are. These aren’t people. These are animals. And we’re taking them out of the country at a level and at a rate that’s never happened before. And because of the weak laws, they come in fast, we get them, we release them, we get them again, we bring them out. It’s crazy.

Trump’s visit to a [New York] county racked by violence attributed to the [MS-13] gang — 17 murders over 18 months, according to local police — aimed to give “power and poignancy” to his message that lawmakers must do more to combat illegal immigration” a White House aide told reporters in a briefing.

The AP had to retract its mischaracterization of Trump’s comments last year (when the lie was first debunked).

Dear @TheDemocrats
I know facts aren't important to you, but Trump was calling MS-13 gang members animals. They are.
Stop lying. pic.twitter.com/oOlauGjCOI

So let’s name some names and give the spotlight to the top three “journalists” who are either knowingly spreading a lie or (possibly worse) are actually ignorant of the president’s actual words and the context in which he said them. 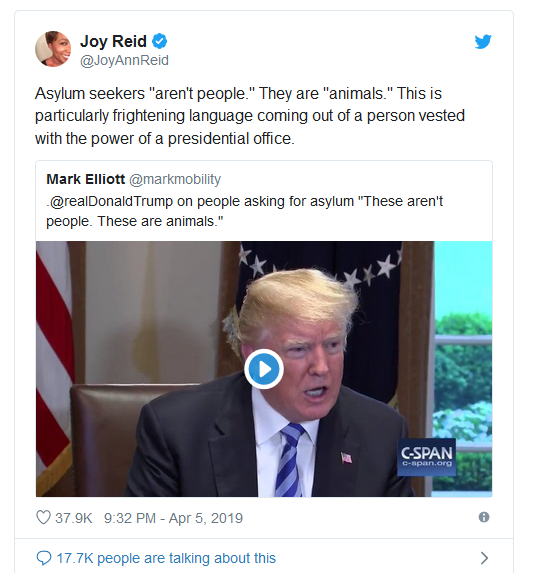 He subsequently deleted his tweet with the damning admission that he didn’t bother to read the original before jumping on the TDS bandwagon. 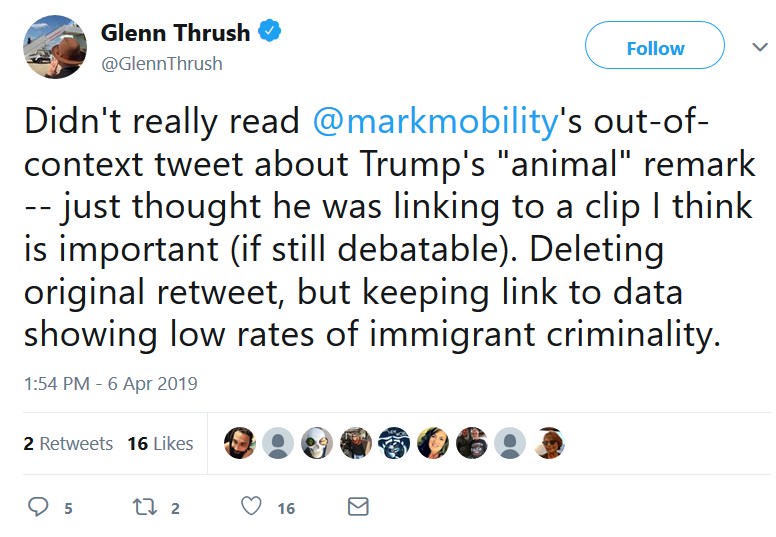 That’s how a sorry, not sorry is done.

Unwilling to simply repeat the lie, Navarro-Cárdenas distorts the president’s words beyond all recognition, stating unequivocally that Trump was talking not only about asylum seekers but about little boys.

There were many more such tweets, and though most have now been deleted, @AG_Conservative has the goods.

This isn't a few random people on Twitter spreading this obvious lie, it's major figures in the media and in politics. pic.twitter.com/C4VTLuYSpH

I mean what is CNN reporter @mkraju doing spreading a tweet with a lie that CNN debunked almost a year ago?

The problem is these mistakes aren’t taken seriously, which encourages people to repeat them and forgot they happened.

While it’s fun—and sadly, true—to think of this disgusting display as the latest manifestation of the Democrat media’s Trump Derangement Syndrome, this situation reflects something far more serious.  It signals an impending existential crisis for American journalism.

Already distrusted by the majority of the American people, does the media really want to repeatedly demonstrate that they are devoid of anything even remotely resembling journalistic ethics?  That they are willing to perpetuate known lies in the service of their “get Trump” mission?  If so, the fourth estate is in danger of making itself not only completely irrelevant but a laughingstock in the eyes of the public it is intended to serve.

They lie on purpose.
There is an audience for their lies.

Goebells (sp?) said it all. Tell a lie often enough, it becomes the truth.

They underestimate the American people. If you lie often enough, about everything, nobody believes anything you spout.

True for some of us, but clearly not true for rather large numbers.

The scum who claim Trump called these people animals, are animals.

Amazing how the left ALWAYS projects itself.

But illegal immigrants’ criminality level is 100%. They have broken the law by being here — what do they call it? — ah, yes! Illegally.

Yeah, one of my favorite Trump owns. Who else could get Democrats to openly support deadly, violent criminal gangs like MS-13? If their murderous lawlessness weren’t such a real problem, it would be funny. How much do you think Pelosi hates being put in that position? No way does she support MS-13, and yet . . . .

Obama to be first sitting president to visit a prison:
https://www.foxnews.com/politics/obama-to-be-first-sitting-president-to-visit-federal-prison

And he’s getting others to join in and defend MS-13 nearly a year after the fact. I respect his evil genius.

However I will call the media animals
and that is factually true.

TheFineReport.com in reply to notamemberofanyorganizedpolicital. | April 7, 2019 at 9:10 pm

A bunch of monkeys, really, And the likes of soros are the organ grinders.

Guns: “Even if it saves only one life it is worth banning firearms.”

Illegal aliens: “No matter how many people are raped, robbed or murdered by MS-13 and other foreign criminals the borders must stay open.”

The Democrats are now on record as not only supporting partial birth abortion but also infanticide.

I will patiently await the fact checkers to debunk Beto’s claims.

s: After all, we need them so much to tell us what is true and what is false (especially since they have shown such a fervor for neutrality in the past) /s

I won’t hold my breath, though.

By the way, did anyone else realize that fact checkers are a joke long before the partisanship appeared?

How can a fact be mostly true, mostly false, etc.?

If a statement is N/A, it is not a fact. It’s likely opinion, conjecture, or not verifiable/falsifiable.

Dog bark, donkeys bray, snakes slither, vultures vomit, and radical lefists lie. It is in their nature to do so.

The media also intentionally lied about Trump’s Charlottesville statement where Tump specifically stated he wasn’t referring to the White Supremacists when he said there were good people on both sides of the statue issue.