The report may force the Federal Reserve not to increase its benchmark interest rate. 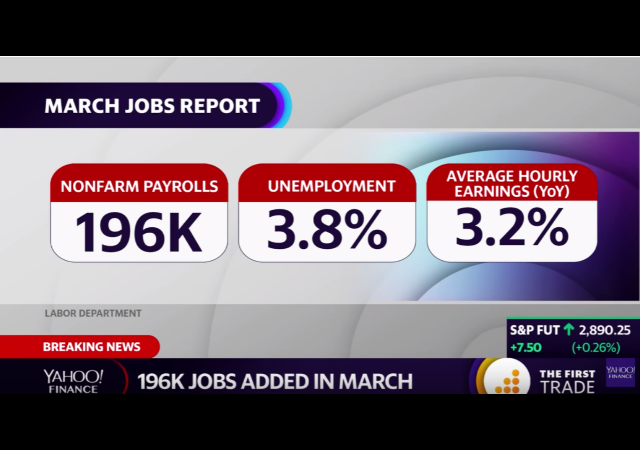 The March jobs report showed a rebound with hiring as the economy added 196,000 jobs and the unemployment rate stayed low at 3.8%.

For 102 months, U.S. employers have added jobs, which makes it the longest streak.

Through the first three months of the year, employers added an average of 180,000 jobs to payrolls each month. That was a slowdown from the robust 223,000 jobs added each month, on average, last year, and roughly in line with the 179,000 averaged in 2017.

Better hiring last month was led by strong gains in the health care and leisure and hospitality sectors. Payrolls increased in construction and mining, after falling the prior month. March employment declined in manufacturing, retail and temporary help services. All levels of government added a net 14,000 jobs to payrolls.

However, the share of Americans taking part in the labor market declined last month.

The fraction of Americans with jobs or looking for work slipped to 63% in March from 63.2% the prior month. The rate had been climbing since last fall, but is still well below prerecession levels.

The healthcare sector added 49,000 jobs while professional services added 34,000. Construction added 16,000, which is a decent growth from February.

However, manufacturing jobs only added 6,000. WSJ noted this is an important stat for the trade talks with China “as a series of downbeat manufacturing data points around the world keep some analysts cautious on the world economy.” Chief US economist Paul Ashworth at Capital Economics told clients that “[G]iven the global manufacturing slump, we expect further U.S. factory job losses over the next few months.”

Broader measures of unemployment, which include discouraged workers who have given up searching for work, were largely unchanged in March. For the past two months, the broadest measure of underemployment, which also includes part-time workers who would like full-time work, has been back at a level not seen since the early 2000s.

In other good news, wages “increased at a 3.2% pace over the past year. Year-over-year wage gains are well outpacing inflation, which is good news for lower-income households that are seeing their spending power increase.” Yet that increase is only 4 cents an hour while it grew 10 cents an hour in February. 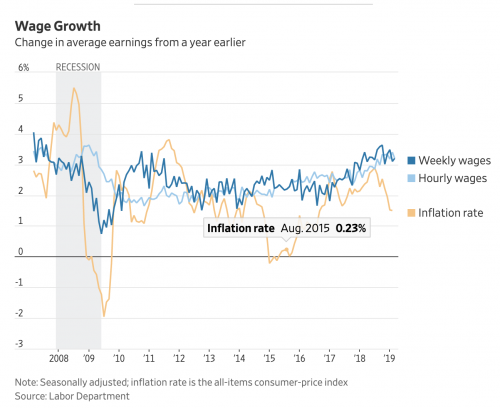 The wage growth obviously means more money in a person’s pocket, which means they can spend more. This will help keep the economy rolling. That is, unless they make too much and their federal income tax increases. But I digress.

Prime-Age workers, 24-54, continued to grow for the past two years. 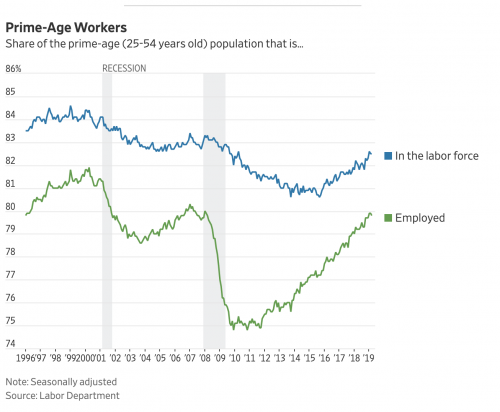 All of these points could lead to the Federal Reserve from raising its benchmark rates. It did that four times in 2018, but has not done it yet in 2019:

New York Fed President John Williams said Thursday that the economic outlook is positive, and that the Fed is meeting its objectives of maintaining low unemployment and stable prices.

“Monetary policy is in the right place,” he said.”The economic fundamentals indicate that slower growth is-far from a sign of doom and gloom-what we should expect.”

Wait a second. How many jobs were saved or created? That’s the number I need because I’m a f’ing moron.

Job growth may be slowing due to saturation . It is getting hard to find employees , so companies may be rethinking the costs of expansion. this level is still above new entrants ( except for illegal) entering the workforce.

What impresses me most about these 2 graphs? The fact that under Trump, the labor participation rate has climbed back to where it was before Obama and the Democratic Congress cratered it.

Remember when Obama declared that people not looking for work as the “new normal”? Well, that was about as true as “you can keep your doctor”.

Now wait just a minute! Obama said he gets all the credit for Trump’s booming economy

I actually saw a liberal complaining the other day that the only reason LFPR is up is because “Trump is forcing people to have to work”…you don’t say? They can’t sit on their ass when they are able to find jobs instead? Oh the humanity!

Wow! 3.6% unemployment. How many jobs are open and in which fields due to a lack of skilled workers and too many Gender & Activist studies grads?

It is going to be a tough argument against increasing visas for skilled workers with a 3.6% unemployment rate.

What I find fascinating is how for eight years, every tiny twitch upward in unemployment was trumpeted from on high, while the inevitable downward adjustment of those numbers got zero press. Then for the last two years, adjustments have been mostly positive.

Maybe we are headed to more honest number reporting.

Pertinent Trump speech reminder of who is against this and U.S.
https://youtu.be/tHsZxJlxHYw

Barry in reply to notamemberofanyorganizedpolicital. | April 5, 2019 at 4:04 pm

His best speech. I hope he wins. No guarantee of that.

notamemberofanyorganizedpolicital in reply to Barry. | April 5, 2019 at 6:31 pm

Barry in reply to notamemberofanyorganizedpolicital. | April 5, 2019 at 9:34 pm