Judiciary Committee Chairman Nadler Wants Mueller to Testify by May 23

Judiciary Committee Chairman Nadler Wants Mueller to Testify by May 23 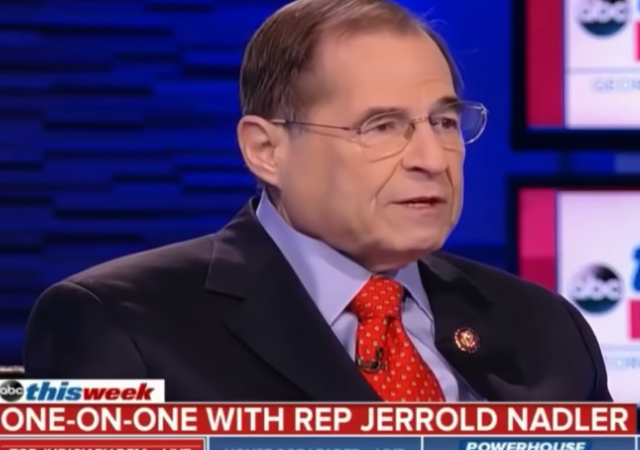 That didn’t take long! At his press conference, one reporter asked Attorney General William Barr if he would allow Special Counsel Robert Mueller to testify in front of Congress. Mueller is still an employee with the Department of Justice.

Barr said he has no objections.

It is clear Congress and the American people must hear from Special Counsel Robert Mueller in person to better understand his findings. We are now requesting Mueller to appear before @HouseJudiciary as soon as possible. pic.twitter.com/Mmo6PA4KPt

I honestly have no problem with this. Let them speak to Mueller. I wouldn’t mind hearing from Mueller myself.

Barr basically repeated the summary he put together with Deputy Attorney General Rod Rosenstein to the press. He reminded people that Mueller found no evidence that President Donald Trump or his campaign colluded with Russia.

So… how long before the spin is that Mueller’s a Republican and they need to hold hearings questioning every single member of the investigative team to expose the fact that Mueller obstructed justice?

We can’t have that!

Now they want to screw with Mueller? Not wise at all. He ought to tell them to go piss up a rope.

notamemberofanyorganizedpolicital in reply to Merlin. | April 18, 2019 at 4:06 pm

I’m sure this will give Nadler the opportunity to show the American public what a great and thoughtful public servant he is, just like he did when Candace Owens testified before his committee.

He’s such a pompous, grand-standing toad. I say, “Let the Democrats have at it.” Show us how brilliant you are.

The longer the dems drag this out, the more sure I am of a reelected Pres Trump.
I don’t know about Nadler’s constituents but, I talk with my friends and neighbors, and whether they’re Trump supporters or not, they just roll their eyes and want this whole charade to be over.

notamemberofanyorganizedpolicital in reply to RITaxpayer. | April 18, 2019 at 4:07 pm

When he wants to waddle quickly, Waddler’s up to the task.

The hatred of the left will never let this die, even when they knew from the beginning it was a hoax pushed on the American people by the Obama and Hillary people and the corruption that was at the top of the CIA and FBI and DOJ.

Think a trivial thing like the Herr Mueller report will stop this nonsense when Herr Mueller did his very best to manufacture something and still couldn’t get it done? Not gonna happen.

These people can’t stop embarrassing themselves. Which I think is great. 2020 is too far away to make predictions. And, if you think about it, the Mueller report found that the goal of Russia’s internet was to sow discord and undermine confidence in elections and government it’s been highly successful.

The word needs to get out that it’s the Democrats and the media who are effectively acting as Putin’s agents. It’s like they’re running a relay race together. Putin passed the baton to the Dems and their media operatives and they eagerly picked it up and ran with it. And over two years later they’re still running with Putin’s baton.

notamemberofanyorganizedpolicital in reply to Arminius. | April 18, 2019 at 4:10 pm

Vlad didn’t have a clue how wildly successful the Socialist-Democrats and MSM (repetition) would make the modest investment in screwing with the election. A few bucks went a long way to neutering the first term of office of the President and also a good ways toward initiating a second War Between the States (actually the people this time, the several states are a political non-entity in the Federal scheme of things since about the start of the last century.

This could be a really good thing – IF the supposed Republicans on the House (Judiciary and???) committees have the stones to ask the right questions and not just grandstand for the cameras or treat St. Robert deferentially.