Hoax tactic used to create climate of hate against Israel. 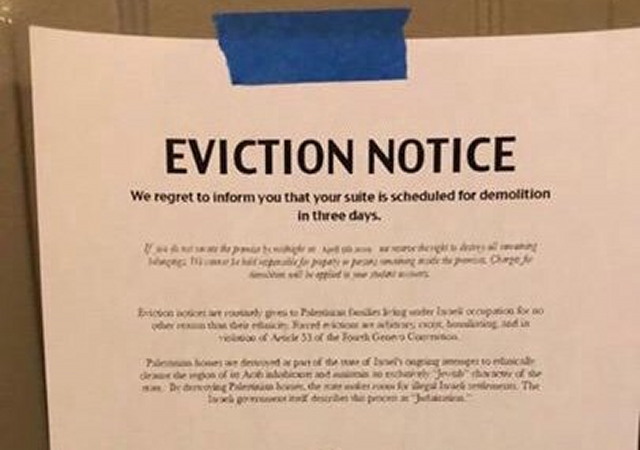 Students at Emory University, including Jewish students, woke up this week to find eviction notices taped to their dorm room doors. The notices were posted by ‘Emory Students for Justice in Palestine’ as part of “Israeli Apartheid Week.”

An investigation is underway at Emory University into a controversial flyer that was posted outside dorm rooms.

At first glance, it looks like an official eviction notice stating the dorm would be demolished, but the flyer then criticizes what it calls “the destructive policy of Israel, toward Palestinians.”

The students who made the flyer said it was done for justice in Palestine. They say their purpose is to call attention to forced evictions of Palestinians in Israeli-occupied territories.

“They posted it on every door,” said student Jamie Guillen.

Guillen woke up Tuesday morning to find what looked like an eviction notice posted on the door of her dorm suite.

It said it would demolished in three days. Looking at the bottom, she spotted a disclaimer saying that it’s not a real eviction notice, it was a political statment on behalf of Palestinians.

The head of a Jewish student campus organization said there’s no evidence the flyer was targeted at Jewish students, but many called to say they felt that way.

Here’s an image of the notice:

Jewish students with Mezuzahs on their doors @EmoryUniversity woke up this morning to these “eviction notices”.

It’s not the Jews, it’s just Israel they said.. pic.twitter.com/5zSIEwbH1r

This disgusting tactic has been used at other schools in the past and the notices were identical:

Here is a that identical notice from 2014 for those looking for a more clear image: pic.twitter.com/POI3haQ4jr

In a piece for the Emory Wheel, writer Anthony Wong praises ESJP for ‘starting a dialogue’ about this issue. He also mentions that this stunt was approved by Emory Residence Life:

After Eviction Notices, Dialogue About Palestine is Crucial

Some Emory students woke up to find fake eviction notices posted on their doors on April 2. These flyers were posted by members and allies of Emory Students for Justice in Palestine (ESJP) to raise awareness about forced evictions of Palestinians. The protests were a part of Israeli Apartheid Week, which coincides with Emory’s Israel Week. Emory Residence Life approved the flyers, but they removed those put on students’ doors because they violated a policy against posting flyers on students’ doors without their consent. Nonetheless, the conversation about Palestinian rights is one that must continue.

ESJP deserves credit for starting the discussion. Their notice stated that 27,000 Palestinian homes have been destroyed and 160,000 Palestinians have been left homeless since 1967, citing the Israeli Committee Against House Demolitions for these statistics. The United Nations estimates that over 60,000 Palestinians are homeless in the occupied Gaza Strip and 70 percent of the population relies on international aid. B’Tselem, an Israeli non-profit organization, states that Israeli authorities have torn down at least 1,964 Palestinian homes in the occupied West Bank and East Jerusalem since just 2006.

When this happened five years ago at two other schools, Northeastern and NYU, Professor Jacobson covered both incidents.

Northeastern University in Boston has a long history of anti-Israeli agitation and intimidation by students groups and some faculty.

Students for Justice in Palestins (SJP) has been one of the prime movers in the climate of fear instilled among Jewish and other pro-Israel students, leading to warnings from the Northeastern administration.

This is not surprising. SJP campus branches are notorious for their aggressive behavior.  At Cornell in 2012, SJP students assisted by three Cornell faculty members disrupted a rally by a pro-Israel group, including using loudspeakers to try to drown out the pro-Israel rally. (added) Cornell SJP also has defaced pro-Israel posters.

At Northeastern, SJP already was on probation for vandalism and disruption when, in conjunction with “Israeli Apartheid Week” SJP served mock eviction notices on students in dormatories. Not only did the distribution of flyers in dormatories violated campus policy, it was a deliberate act of provocation towards pro-Israel students where they live.

Students for Justice in Palestine frequently is the perpetrator of these dorm stormings, as happened at Northeastern University recently, resulting in SJP’s suspension.

The point of sliding political flyers under dorm doors, rather than handing them out on the street as students enter and exit, is to intimidate students in their most vulnerable place, their bedroom, and at their most vulnerable time, while they sleep. That is why many if not most universities ban the practice.

The latest dorm storming was at Palladium Hall at New York University early this morning, before students awoke, as reported by NYU student Laura Adkins at The Times of Israel.  (added) According to an email forwarded to me, such dorm storming would violated Palladium policy: “All people/clubs must have their flyers approved for posting at the Palladium RC. No flyers are permitted to be slid under apartment doors.”

What is wrong with some people?

“for Justice in Palestine”

We could end this charade by giving them “justice”. Most certainly they have earned carpet bombing with fuel-air devices.

Notice how the numbers on the flyers haven’t changed in the intervening five years. That means either A) this was a thing that happened at one point and has stopped, or B) it’s made up or exaggerated in some fashion, or C) all of the above. Given that the 27,000 homes number counts from ‘67 onwards, I’m leaning towards creative accounting where they’re including things like Palestinian homes that have been “destroyed” because Jews are living in them now or ones that were destroyed in the Six Days War.

It’s just like “global warming” science – Numbers, Schnumbers. They make up whatever they think sounds good, they couldn’t care less about what they actually are. It’s also just like the continued fraud about how many people died from the Puerto Rico Hurricane – it was only 64 people. 64. but AOC and her allies are out shrieking that it was 3000, because who’s going to call them out on their bs?

These ignorant ‘stunts’ only increase my support for Israel and my loathing for activists of all socialist stripes that demand I vote Democrat ‘for the children’ or other such crap. It’s all about power and control, never about real justice.

Isn’t Jimmy Carter the one who started the “apartheid” meme? Why does he hate Israel so much?

I would respond by posting a copy of the 2nd amendment to the constitution on my door.

Unfortunately, the 2nd Amendment doesn’t seem to apply on college campuses. The 1st doesn’t either for that matter (unless you’re on the Left).

Students should put posters on their doors stating that this dorm room is neither the HQ of a terrorist organization nor the residence of a known terrorist and will of course not be slated for demolition.

This.
The actual demolitions are not because the homes are prime real estate those greedy Jews wanted to steal so they’d have someplace to hold their ceremonies to sacrifice Christian and Muslim children to get baby blood to make their matzahs.

The actual demolitions are because they got tired of suicide attacks by radicalized Muslim youths being rewarded not just in the afterlife, but in this life by providing their families blood money reward pensions in payment for their reducing the number of living Jews in the world.

You don’t want your home demolished by the Israeli govt?
Don’t hide AK47s and other war material there, don’t use it as an IED manufacturing site, don’t dig tunnels to enable cross-border smuggling and/or infiltration, and above all, don’t teach your kids to murder Jews for fun and profit.

Also, don’t build that home illegally in the first place.

And also in today’s news, Ilhan Omar tweets advocating the release of Hoda Abdelmonem, asenior female leader of the Muslim Brotherhood in Egypt.

Seriously we all need to understand that these people are taking over the DNC. The antisemitism is NOT HURTING THEM. IT HELPS THEM FUND RAISE globally.

I honestly believe that if the Jews and sane liberals don’t start cooperate with Trump ASAP to prevent them from getting a firm foothold, there will be nothing to stop this.

How many Jewish homes across the Middle East were demolished and how many Jews evicted from Arab countries in the years following Israeli independence? Let’s not bring up that inconvenient truth.

How many times has the Palestinian Authority refused peace deals?
I think it’s 7!

There are few things that cheer a Muslim up than ‘getting over’ on an Israeli OR raping a blue eyed blond haired child. Their ultimate happiness is dying during a time of violent jihad and attaining Paradise. I’m sure Israel can figure out how to meet the Muslim needs for happiness with one of these offerings.