As usual, Democrats aren’t practicing what they preach. 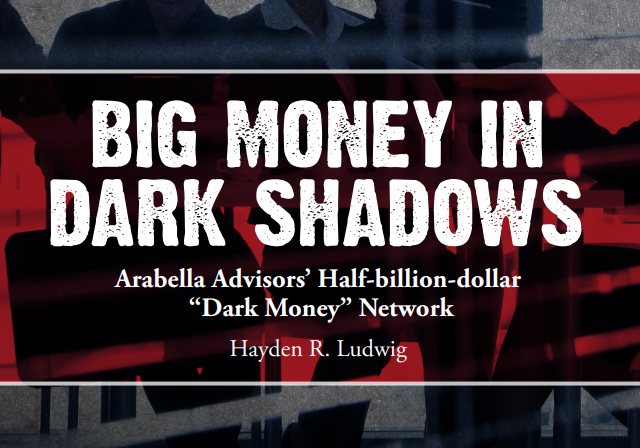 The mainstream media loves to trot out the term “dark money” when reporting on the political activities of conservative mega-donors like Charles and David Koch, Sheldon Adelson, and others.

They use the term less frequently when talking about liberal mega-donors, but a new report detailing one billion-dollar network in particular leaves no doubt that the influence of dark money is alive and well, and thriving among Democrats in spite of their protestations to the contrary.

An expansive network of “shadowy” dark money donors has grown to rival the influence of the conservative Koch network — pumping millions into left-wing causes ranging from health care to climate change to abortion — all while flying well under the radar of public scrutiny, according to an explosive new report obtained by Fox News.

The report, by conservative watchdog Capital Research Center, describes a band of nonprofits operating under the banner of Washington-based philanthropy company Arabella Advisors. Those “pop up groups” are housed in four Arabella-controlled “sister” nonprofits, according to the report: the New Venture Fund, Sixteen Thirty Fund, Hopewell Fund and Windward Fund.

The report says the “hydra-like” network brought in $1.6 billion between 2013 and 2017 “to advance the political policies desired by wealthy left-wing interests,” as the network’s revenues grew by 392 percent. The four Arabella-controlled “sister” groups brought in $582 million in 2017 alone, according to the report. If the four groups were a single entity, it would make them the 22nd largest public charity in America, with higher revenues than the American Civil Liberties Union (ACLU), Planned Parenthood or the Clinton Foundation.

Who founded the group? A Clinton Democrat named Eric Kessler:

Kessler is closely involved in Democratic Party and left-wing politics. He is a former Clinton administration White House appointee and previously served as national field director for the League of Conservation Voters. Kessler later served as a member of the now-defunct Clinton Global Initiative.

Kessler chairs a committee on culinary advocacy for the center-left James Beard Foundation and is co-founder of the Chef Action Network. He also serves on the board of directors of the National Democratic Institute.

Per CRC, Kessler is a principal and senior managing director for Arabella Advisors.

The full report is expansive, but one thing I found especially interesting about it is the network of websites the group created that are little more than astroturfing efforts designed to make the various campaigns at each site appear to be grassroots in nature. From page 11:

But Arabella Advisors offers a unique take on fiscal sponsorship: creating websites designed to fool the casual viewer into thinking they’re standalone activist groups. As noted, many of these websites give the impression of depth when in fact they’re more like masks—sophisticated websites made to cast the illusion that they’re more than just a small digital space owned by a much larger entity, yet often powerful enough to win political battles.

Because websites can disappear as quickly as they go live, there’s a certain ephemerality to Arabella’s pop-up groups. That’s a huge advantage to Arabella’s clients in today’s politics, where the news cycle is driven at the speed of a tweet, since their websites can vanish just as quickly as their campaign began. Why wait for the wheels of bureaucracy to turn when you can quickly create a website to spread your message?

These “pop-up” groups could be described as “Potemkin projects”—like the eponymous phony mobile villages built for Russian Empress Catherine II to make her 1787 trip to the Crimea feel like home. Arabella’s campaigns pop up out of nowhere and then—if it’s politically or financially expedient to do so—vanish almost as quickly as they appeared.

Here are some things to keep in mind when it comes to Democrats and campaign finance transparency:

1. Democrats absolutely love to pretend like they’re going to be the ones to fix “dark money in politics.” But when they think no one is looking they will engage in the very practices they publicly condemn. Consider what their own website says about transparency in political contributions:

Democrats support a constitutional amendment to overturn the Supreme Court’s decisions in Citizens United and Buckley v. Valeo. We need to end secret, unaccountable money in politics by requiring, through executive order or legislation, significantly more disclosure and transparency—by outside groups, federal contractors, and public corporations to their shareholders.

2. Sounds like they’re pretty serious about it, right? Except in the last election cycle, liberal dark money groups heavily outspent their conservative counterparts:

Dark money groups spent $150 million in the 2018 midterms. And unlike super PACs, which must disclose their donors to the Federal Election Commission, these politically active nonprofits are not required to do so.

3. Democrats will tell you that they’re only playing by the rules that were set by Republicans, but that’s garbage, and they know it. In fact, the campaign finance reform measures they proposed this year were so radically extreme and anti-First Amendment that they had to know Republicans wouldn’t take the bait on them.

So House Democrats passed the legislation knowing it wouldn’t get Republican support in the Senate, which in turn gave them an “anti-dark money” rallying cry to use in the 2020 elections against the GOP.

And these same Democrats will complain about it in public all the while their own dark money groups do their bidding behind the scenes.

RE: “The mainstream media loves to trot out the term “dark money” when reporting on the political activities of conservative mega-donors like Charles and David Koch, Sheldon Adelson, and others….”

Because just like their masters, the Democrat Party, the MSM is always self-projecting what they are already doing Big Time onto innocents.

I’ve said for years that, for Liberals, it’s all about the money. They always claim to be holier than thou but that’s just part of the scam.

So, now we have somebody else trying to use money as a substitute for popular support…..

“Democrats support a constitutional amendment to overturn the Supreme Court’s decisions in Citizens United and Buckley v. Valeo. We need to end secret, unaccountable money in politics by requiring, through executive order or legislation, significantly more disclosure and transparency—by outside groups, federal contractors, and public corporations to their shareholders.”