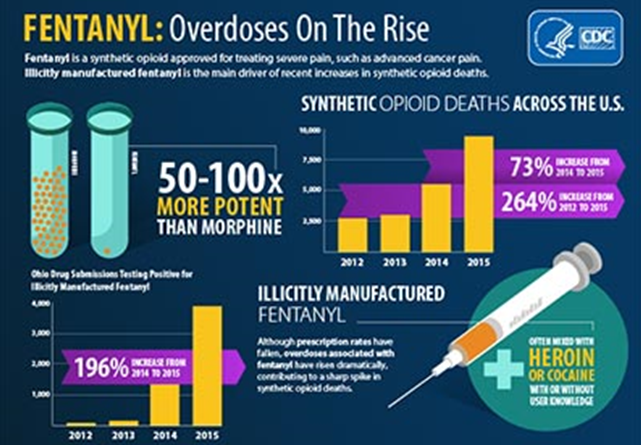 I have reviewed the toxicity of the opioid fentanyl, which officials have determined as a key factor in the escalating number of drug overdose deaths sweeping the nation.

Now, according to an internal memo, the Trump administration has thought about labeling fentanyl as a weapon of mass destruction.

The synthetic opioid, blamed in health surveys for surging drug overdose deaths in the United States, has for decades concerned national security officials because of its potential widespread lethality in terror attacks, and in recent months, officials from DHS and the Pentagon have met to discuss an official WMD designation as a tool to disrupt the drug’s widespread availability on the black market, the memo says.

“Fentanyl’s high toxicity and increasing availability are attractive to threat actors seeking nonconventional materials for a chemical weapons attack,” the DHS assistant secretary for countering weapons of mass destruction, James F. McDonnell, wrote in the memo, which was obtained by the military news publication Task & Purpose.

As little as 2 to 3 milligrams of fentanyl has the potential to be fatal to humans. Legal Insurrection readers may recall the haul in New York that netted enough of the substance to kill over 2 million people.

The memo indicated that planners have focused only on quantities and configurations of the substance that could be used as mass casualty weapons.

…[T]he memo leaves out some key details, according to Dr. Michael Kuhlman, chief scientist specializing in WMD issues at Battelle, a science and technology nonprofit organization.

“What the memo doesn’t spell out the details of is: In what quantities and what do they mean by configurations?” Kuhlman said.

Kuhlman said a chemical powder is not in itself a WMD and that it needs to be combined with some form of delivery method for it to be considered so.

“You need something to weaponize it,” he said.

One has to wonder if officials discovered terror plans to weaponize fentanyl, or if this is a novel approach to dealing with the cross border drug traffic. Perhaps DHS officials have considered the declaration, as it may offer a pathway for military intervention against the drug cartels.

As if these developments didn’t trouble us enough, San Diego’s drug enforcement experts issued a warning about a new opioid that has become more prevalent: Carfentanil. It is far more toxic than fentanyl.

Carfentanil was originally created to be used as a tranquilizer on large zoo animals, like elephants. The FDA initially restricted it’s manufacture to just 28 grams per year in the US.

According to FDA Spokesperson Lindsay Haake, “The sponsor of Wildnil, a form of Carfentanil, voluntarily relinquished the approval for this potent analog of Fentanyl in March 2018, as it hadn’t been marketed in at least five years, and because the sponsor wanted to avoid any potential public health effects associated with diversion of the drug if marketed in the future.”

It only takes .02 mg of Carfentanil to cause a deadly overdose in humans. That’s about the same size as a couple grains of salt.

As an Anesthesiologist I don’t understand the abuse of Fentanyl when sufentanil produces a more intense euphoria and is more fat soluble which allows it to pass through the oral mucosa allowing for discrete abuse. Which is why it is always the first choice for abusing Anesthesiologists.

I find myself thinking about a verse in Matthew’s Gospel.

“Except those days be shortened, no flesh shall be saved.”

It is amazing how many ways we are finding to destroy all of humanity in large chunks through nukes, disease, and poisons, yet we panic over the size of an AR-15’s magazine capacity thinking it alone will save our children as we tuck them into bed.

The stuff is evil, but it’s secondary.

Assume you are Chaos. Like entropy, you spread and promote yourself everywhere, it is your nature. How can you use drugs as an agent? The target society, that is whatever society is most ordered and functioning, will resist that element of chaos, until it is fractured.

So to the task: first, fracture, Catherine, and degrade the target society. Confuse its purpose, confound it’s confidence. Now the weaker individuals within, or those without families, or those who were not taught the skills to survive life, or those who are naturally lazy are ready. Like an acid etch, you have created porosity. Drugs, which were always available but had mostly poured off of the target now so can, creating an ecosystem of more drug dealers, more drug dependence, and the circular drug rehab industry which actually functions to provide places to distribute more drugs and reward the users.

Halting the import of cheap drugs is necessary, it won’t be enough.

The economic model of the drug rehab industry is based on failure. There is more money to be made in return visits than in actually fixing the problem.

When we criminalize these drugs, per se, we deny them to people who have legitimate need for them. I have several friends who have serious back problems and are veterans of all kinds of surgical adventures who depend on these high-powered drugs to function at all. Now they are being told by their doctors that they cannot be prescribed to them. Often the doctor is in fear of drawing the attention of some regulating agency.

Everybody eventually has back problems. Most of them are better addressed by chiropractic care and acupuncture than by either drugs or surgery.

Wait until you get to live with chronic pain and discover how mindless that statement is.

“Back problems” is a pretty nonspecific term. I have them frequently and find that “doctor Jack Daniels” is able to deal with it. Actual, verifiable injury is not something that pretend doctors should deal with. Cracked vertebrae, ruptured discs, etc require actual medical intervention, and they can hurt like hell.

I had a shoulder rebuilt about 10 years ago and went home with a 2-day supply of morphine in a pump and a Rx for some heavy pain killer when that played out. Even with all that, I have no interest in reliving those days.

And on a loosely related subject, All this regulation when you can get a lot of stuff that does similar things in your local feed store, or from a catalog.

Rarely have I ever heard such an ignorant statement based in fantasy and sold as truth.

There are some people who think opium was a weapon used by the Brits in an effort to take down China.

The thing about the more powerful synthetic opioids is that they are so highly poisonous that they could conceivably be used for mass-murder.

Not just “some” people. A good many historians. And it wasn’t just the Brits – also the French and US. At one point the Chinese seized and burned millions of pounds of opium from foreign ships in the port of Shanghai. My Asian History professor was rather funny in his description of the event . . . can you imagine the high?

There are, unfortunately, dozens of fentanyl variants (among many other variants of narcotics & cannabinoids) which can be easily purchased over the web as “research chemicals” “not for human consumption” (right), avoiding any FDA regulation or control. 3 or 4 clicks and it’s on the way. Some are even more powerful/lethal than carfentanyl.

The FDA has a (kludgy) process for “scheduling” drugs in controlled categories and they would have to schedule each and every chemical variant of fentanyl individually in order to bring them under FDA purview. They just can’t/couldn’t keep up with the Chinese chemists making this stuff. The number of new, previously unknown variants discovered by the toxicology divisions of coroners’ offices has been growing exponentially over the past decade.

I believe these illicit versions are huge contributors to opiod-related deaths as they are being cut into other street drugs commonly now, usually without the purchaser (& maybe seller) being aware.

As a recent cancer patient (now in remission) I was furious that it was so difficult for me to get pain meds when I needed them and that I needed to see the doctor and get another prescription every time I needed a refill, which happened once a week as I could only get a one-week supply at a time. At the same time, virtually anyone that wants can get anti-anxiety “happy pills” with virtually no questions asked.

Collateral damage for those oblivious to reality. You suffer so they don’t have guilt pains and can virtual signal.

In the street drug world, purity and potency are a crap shoot.

DHS has been pushing this for at least 10 years. Whether it’s legit or a bureaucracy grabbing more power I’m not sure. Fentanyl has gotten more scrutiny under Trump for sure, largely but not always for the better.

More than 150 people were killed in the Moscow theater hostage crisis in 2002 (I think) by aerosolized carfentanil or fentanyl. The paramedics didn’t bring enough naloxone to save everyone because the special forces weren’t too forthcoming about what they were doing (trying to keep tight operating security)

So, unintentionally, a mass homicide has happened. Weapon of mass destruction isn’t quite the term I would use, but it’s bad stuff when enough is pumped into enclosed spaces.

When killing an unborn human being is strictly between a woman and her doctor why should 5 Vicodin be subject to layers and layers of government hoops to jump?