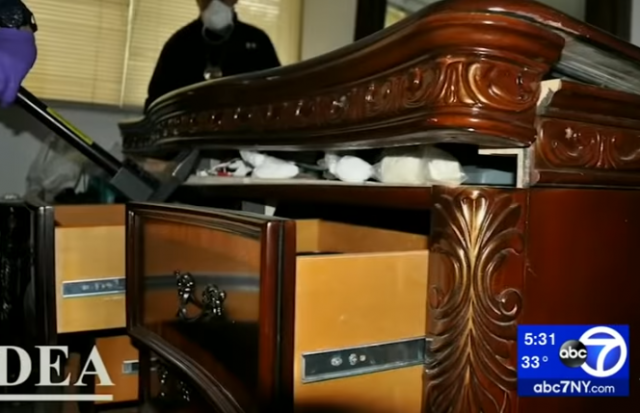 The US Drug Enforcement Administration reported that a raid on a home in a sedate New York state neighborhood uncovered enough fentanyl to kill 2 million people.

Federal agents found five kilograms (just over 11 pounds) of fentanyl and six kilograms (13.2 pounds) of heroin Friday when they raided a fentanyl mill operating out of a home in Ardsley, the DEA said.

Five people who were arrested during the raid are facing several drug charges.

As one might suspect, the neighbors were clueless about what was occurring in the house.

“It’s shocking, it’s shocking and kind of scary and awful all at the same time,” said a neighbor.

Five people are now in custody and facing charges ranging from conspiracy and possession of heroin and fentanyl to resisting arrest.

“I have been here for 11 years, nothing like that ever happened before.”

Neighbors tell us that they didn’t know their neighbors well but they said that they started renting the house a few months ago.

One resident told us that they did notice a lot of cars and coming and going but never suspected a large drug mill was operating on their street.

Border crisis deniers might have difficulty minimizing the impact of this toxic opioid on America’s population of young adults. For example, Arizona and other southwestern states bordering Mexico are a hot spot in the nation’s fentanyl crisis.

Aaron Francisco Chavez swallowed at least one of the sky blue pills at a Halloween party before falling asleep forever. He became yet another victim killed by a flood of illicit fentanyl smuggled from Mexico into the Southwest — a profitable new business for drug gangs that has pushed the synthetic opioid to the top spot for fatal U.S. overdoses.

Three others at the party in Tucson also took the pills nicknamed “Mexican oxy” and police flagged down by partygoers saved them by administering naloxone overdose reversal medication. But the treatment came too late for Chavez, who died at age 19.

The four thought they were taking oxycodone, a much less powerful opioid, investigators believe. The death of Chavez and many others, officials said, illustrate how Arizona and other southwestern states bordering Mexico have become a hot spot in the nation’s fentanyl crisis. Fentanyl deaths tripled in Arizona alone from 2015 through 2017.

“It’s the worst I’ve seen in 30 years, this toll that it’s taken on families,” said Doug Coleman, the U.S. Drug Enforcement Administration special agent in charge of Arizona. “The crack (cocaine) crisis was not as bad.”

The death rates have reached the point in Ohio that the Stark County coroner in Canton, Ohio, had a “cold storage mass casualty trailer” truck because the morgue overflowed with bodies. Nearly half of them victims of drug overdoses.

In 2015, the federal Centers for Disease Control and Prevention, reported West Virginia, New Hampshire, Kentucky, Ohio and Rhode Island had the highest rates of drug overdose deaths in the country.

But the situation in rust belt states like Ohio, where the drug overdose rate in 2015 (the most recent federal figures available) was 29.9 per 100,000 people, is especially dire.

The deaths were attributed to overdoses to heroin, a powerful tranquilizer used on animals like tigers (carfentanil), as well as fentanyl.

Must be part of the Democrat Party leadership plot…….

But we have a two-tier justice system, and every day the likes of hilllary clinton remain out of jail, the more of a distraction arrests like these are.

Look at what the DOJ is focused on (good stuff, but small time:)
https://www.justice.gov/

All that’s missing is a donut shop for corrupt FBI heads to hang out in.

And when is the prosecution of “Crooked Cortez” going to begin?

Ocasio-Cortez And Her Chief Of Staff ‘Could Be Facing Jail Time’ If Their Control Over PAC Was Intentionally Hidden, Former FEC Commissioner Says:

Only possible solution is pass more regulations that will only affect legitimate opiate patients, give more power and money to the very people who allowed the problem to morph into a “crisis”, and celebrate more immigration and diversity.

Until the penalties for dealing are fully enforced by the courts this will only get worse. Judges often let dealers who’ve been arrested numerous times plead their cases out and end up with time served or probation. The justice system is a revolving door that never stops spinning. Perps walk in and turn around and walk out.

Chappaqua? Nowhere near there. Chappaqua is in northern Westchester. Ardsley is closer to NYC.

Waiting for argument that this happened in New York and not at the border or this all came by mail or by sea.

The black market and the extreme inconsistency in potency of street drugs makes this a true crap shoot.

Good time to re-watch Ken Burn’s “Prohibition”. Since 1911 the “war on drugs” has been a roaring success just like Prohibition.

Imagine that piece of furniture falling out of a moving van on some crowded interstate, splitting open, spilling all that fentanyl. It gets hit by other vehicles, cars, trucks, SUV’s running over and spreading that stuff all over the place. That is just one unintended scenario I can think of. Imagine if someone had that load and bad intentions.

Think of it dumped into water supply to large apartment complex. Think of it tainting food at super market. Subway. Most medics wouldn’t have enough Narcan. The killing capacity is huge. Not as deadly as nerve has but easily obtained these days.

I wish we could pin this on the Democrats but no one is more despicable regarding the open borders problem than the Republicans, the party that doesn’t stand for anything but can always be counted on to circle the wagons around the Democrats to defend them. It’s us and Trump against the world and once again, Rand Paul picks the wrong side. What a spineless hypocrite and weasel he turned out to be. Even crazier than his dad if that is possible.

Aaron Francisco Chavez swallowed at least one of the sky blue pills at a Halloween party before falling asleep forever. He became yet another victim killed by a flood of illicit fentanyl smuggled from Mexico into the Southwest

Sorry, no, a guy who voluntarily swallows poison is not a victim of anything from Mexico, nor even a victim of Halloween. He’s a victim of himself, and nobody else.

I’m sure there are all sorts of excellent reasons—and not all of them mere enhancement of federal revenue—for controlling the import or manufacture of any particular drug. But it’s not obvious that protection of the casually suicidal should be high on the list of government obsessions.

“Border crisis deniers”, a better way to characterize this is Racist!

This is such an absurdly large quantity that I’d have to wonder if they’re talking about pure fentanyl, or something that’s already been cut 100:1?

It makes for a dramatic headline, though. No one knows for sure what the LD50 is for humans, but for monkeys it’s about 0.03 milligrams per kilogram.