“Reputation is central to this case, and character traits [that are] unrelated to the issues are not. It is the community’s perception of a business and school that are important, not traits of an individual that are unrelated to the events that happened.” 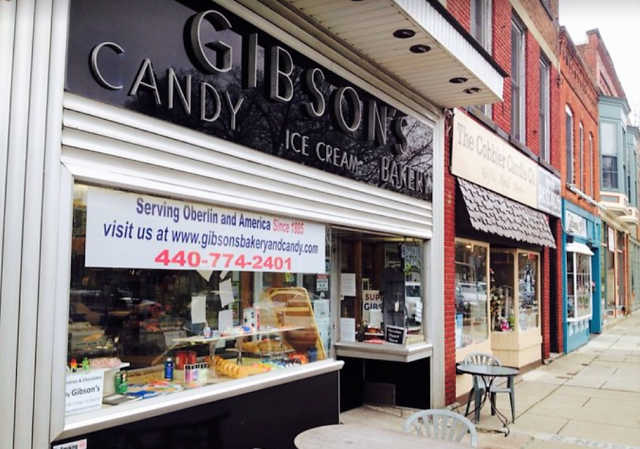 I attended court today as the lawyers argued pre-trial motions.

As most trial lawyers know, pre-trial “in limine” motions can often decide the case. What the judge excludes and what they allow, how to define certain terminology the jury will hear, and rulings what is important and what is nonsense.

You know, like deciding which of the terms “collusion” or “conspiracy” is more legal and meaningful than the other.

Today in Elyria, Ohio, Lorain County Common Pleas Judge John R. Miraldi ruled on about a dozen motions to exclude or allow certain evidence to be put before the jury. This lawsuit is an unusual one, in that a small local business, Gibson’s Bakery, claims the small liberal arts institution of higher learning, Oberlin College, defamed and libeled them with their participation and backing of a protest (and the aftermath) in early November of 2016.

This protest came about after three African-Americans were arrested for stealing wine from Gibson’s. The mess afterwards was a big student protest where the store was accused of being racists for pursuing the shoplifters and being in favor of prosecution.

Gibson’s is claiming the school did not just act as overseers of their students’ safety, but as active participants in the protest, including the passing out of flyers which claimed the little store was “racist.” And they want the school to pay them a large amount for the damage to their business and reputation in the community.

The three accused of shoplifting eventually plead guilty and read a statement in court that “racial profiling” never occurred.

So in this case, the jury will likely decide their verdict largely by their view of which side can be more trusted in their arguments. In these motions decided yesterday, the judge was very clear in his view of how this case will proceed: evidence of an individual’s “character” traits will not be allowed for the most part. Evidence of overall “reputation” in the community will be allowed.

“There are character issues at play in every person, but character evidence has to go to a specific trait,” Judge Miraldi said. “Reputation is central to this case, and character traits [that are] unrelated to the issues are not. It is the community’s perception of a business and school that are important, not traits of an individual that are unrelated to the events that happened.”

Because of that way of thinking, Judge Miraldi severely limited the use of Facebook posts and text messages which both sides wanted to use.

Oberlin College had gone through Facebook posts from the businesses ownership and employees to find evidence of racial and community derision in them. Most of them were from Allyn D. Gibson, the family employee who was working the day of the shoplifting and scuffled with them outside the store.

Oberlin College found some posts he made about five years ago where he posted some comments about the problems Oberlin College student shoplifters in the store had caused, on safety and crime issues regarding some students, and some posts where he indicated he had a temper. Most of these were in 2012.

The judge ruled post specific to the events were relevant and could be used as evidence by either side, but those that just speculated on a person’s random thoughts on a variety of unrelated issues could not.

Judge Miraldi also ruled the plaintiffs desire to use multiple Facebook and text messaging from the Oberlin College’s students and professors were also out of bounds for the most part. Mainly, the judge said, because the court and the jury couldn’t determine which ones were expressed as official business communications from the college, while others might have been just small talk.

“How do you determine whether there was a state of malice in the reason they sent the text message or emails, and then what was just an opinion sent to a friend or acquaintance,” the judge said. “The problem will be determining which [Facebook Posts], emails and spoken words are part of the college and which are just the opinions of a professor or employee.”

What the judge ruled is that most of these “opinion” postings will not be able to be presented to the jury, unless the ones who created the opinions are testifying in court. In other words, he will resist the ability for either side to bombard the courtroom with a huge amount of accusatory statements in this present-day world of excessive online communications.

There was one other fascinating, little data point that will be kept out of court – and I purposely saved this for last. That would be the details in negotiations between the Oberlin College and Gibson’s Bakery before their suit was filed in late 2017. Oberlin said it wanted to present as evidence the letters sent to the school to settle things up, and how much Gibson’s wanted from the school monetarily for such a settlement. Gibson’s objected to the negotiations being used as evidence. The judge agreed. “I am not going to permit any evidence of negotiation for a settlement,” he said, adding that “you can’t begin settlement [talks] without a demand.”

More “in limine” motions to be decided Wednesday, before the jury trial is schedule to start on Thursday.

WAJ Note: We will have end-of-day wrap ups every day, starting with pre-trial motion arguments on April 30 and May 1, and jury selection and trial starting May 2. There will be weekly wrap-ups on weekends. Of course, we will report on the verdict. The trial is expected to take one month. This is a project of the Legal Insurrection Foundation. Your support to make this type of coverage possible is appreciated.

Thank you for covering this case and providing legal insight. It is much appreciated!

Yes, yes, yes!
I’m thrilled to be a donor to the cause, too.
Keep up the great work!

I applaud this Judge’s rulings! I find each one of them to be very sober, well considered applications of legal doctrine. First, Oberlin wanted to bring in Facebook posts of one of the bakery employees that weren’t about this case – Judge said nope, has to be relevant to this case to come into this trial. The Bakery wanted to bring in a lot of facebook posts from students and others who had no specific knowledge of or connection to this case – again, the Judge said nope, we’re gonna stick to the facts, not reams of wild talk. And I was quite please to see that he threw out any evidence of settlement negotiations. It’s a longstanding legal principle to *never* allow evidence of failed negotiations into a trial, criminal or civil, because to do so would have a damaging and chilling effect on all potential negotiations in all future trials, and thus would harm the Justice System itself.

All in all, this looks like a very fair minded and competent Judge who is going to conduct this trial exactly as it should be conducted, on its merits.

Very Interesting! Thank you. Looking forward to reading all the LI reporting as this case progresses.

I would like to see Gibson collect money from Oberlin, but it would be a shame if the individuals involved got off scott free. Each player should also end up being personally responsible for enough damages to make them really sorry for their role in this.

This case is one more example of why affirmative action needs to end. We need to drive a stake though constant false claims of racism for profit or as cover for crimes.

Just settle the case: let Gibson break the bottles of wine over the heads of the three sleazeballs stealing them.

Not a lawyer but sounds like Oberlin may have won this day.

Not allowing the inflammatory activities of faculty, who are perpetuating the reputation attack, will hurt the bakery’s case substantially.

If the faculty was NOT using official comms channels I sort of agree with keeping it out. The bakery needs to go after the individuals in that case. Since I doubt the individuals have insurance this stuff, real pain would be felt.

My wife worked in HR/marcom for a major D1 university for 20 years, and there’s a pretty good approval process for messaging; most of the time with a VP signing off. If it came out through an official channel, the bakery wins like Erin Brokevitch minus the cleavage. Although it could be an insurance claim for the university, I don’t know if it would be denied or not since it was intended.

Whoops I wrote Branca but meant Jacobson. CURSE YOU LACK OF EDIT BUTTON

Thank you for covering this.

I was looking for news items today and came across this piece in the student newspaper, which I believe is the only one done in the previous year. There really has been an air of silence about it.

I guess these kids are training to work at the NYT. As always, comments are the best part.

Oberlin probably will settle. They will go before a jury of locals who probably don’t like the students and the school. Do they really want to get a judgement?

IMHO, a reasonable person would have seen this situation for what it was, and would have chosen to either not get involved or immediately make amends for any and all acts.

I kind of wonder who is calling the shots for the College here. They have a new President who came on board after the incident. The second in command, I believe, is the Dean of Students who is named in the suit. My guess is that they have kept Raimondo around only because letting her go could be interpreted as an admission of “something.” So that would likely leave the Board, and the Head of the Board as the final arbiter. Did I mention that the head of the board is a Policy Director for Soros? Not only do I not see them not settling, but, I would expect endless appeals against any judgement. The incident was fueled by TDS in the beginning and I don’t see any of that energy dissipating soon. I went to school with these people and I know how they “don’t think” under certain circumstances. IIRC, it has been awhile, but I believe a member of the board was even involved early on with the legal defense of the students. The College got way too involved in this event early-on for them to now claim that they had no involvement.

I’m an Oberlin College alumna and am pleased with the judge’s decisions thus far. The college has acted irresponsibly, and several good lifelong OC employees, faculty and otherwise, who refused to do the dirty work the college required of them re: this situation, were fired. IMHO, the college should have settled and apologized. Shameful.