Germany’s Free Democratic Party: “NGOs that call for the boycott of Israeli products, companies or individuals should be denied access to state funding.” 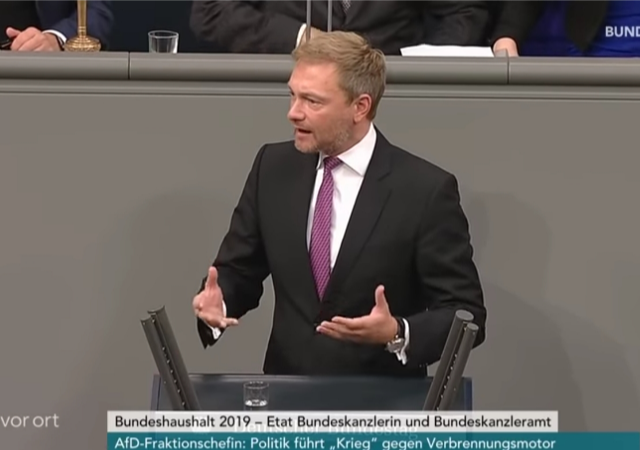 Germany’s center-right Free Democratic Party (FDP) has introduced a bill to end government support for anti-Israel BDS Movement. The proposed legislation seeks a ban on state funding to organizations involved in boycott and delegitimization campaign against Israel. Germany—directly as well as thorough European Union institutions—hands out millions of euros each year to activists and NGOs that run the anti-Israel boycott campaign.

“We want a real position of the German government against antisemitism with concrete measures – and not simply say that one condemns antisemitism,” Frank Müller-Rosentritt, German MP and the co-initiator of the measure, said.

Müller-Rosentritt explained the reasons behind the proposed bill on his website:

The FDP parliamentary group in the German Bundestag has adopted a motion proposed by me and [fellow MP] Bijan Djir-Sarai opposing the BDS Movement. We want to prevent state support to organisations that question Israel’s right to exist. We are approaching other parliamentary groups of the Bundestag to make our initiative successful.

Since its inception in 2005, the BDS Movement (Boycott, Divestment and Sanctions) has been calling for an economic, cultural and political boycott of the state of Israel. The BDS Movement is not only anti-Israel in its methods and goals, but in large measure clearly anti-Semitic. [Translated by the author]

FDP, the fourth largest party in the German Bundestag, has 80 MPs in the 709-seat house. The Free Democrats will need the support of other parliamentary parties to pass the bill. The party has refused to take the support of the right-wing Alternative for Germany, the largest opposition party in the Bundestag. “We are trying to get the bill passed with the backing of centrist democratic parties,” Müller-Rosentritt told German newspaper Der Tagesspiegel.

The AfD has opposed the BDS Movement in the past. “Antisemitism has no place in the AfD,” party’s deputy leader Beatrix von Storch said in a 2017 interview. “We are also against the boycott of Israeli products being driven by the left.”

The center-right FDP, once a natural partner to Germany’s ruling CDU, walked out of the coalition talks in 2017, refusing to join Chancellor Angela Merkel-led government. “It’s better not to govern than to govern wrongly,” FDP chief Christian Lindner said at that time.

The German newspaper Süddeutsche Zeiting reported the details of the anti-BDS bill:

“The BDS Movement is not only anti-Israel in its methods and goals, but in large measure clearly anti-Semitic,” says the motion approved by the FDP, and [a copy of which was obtained] by the Süddeutschen Zeitung. The BDS questions Israel’s right to exist and demonizes Israelis in “by the ways and means of conspiracy theories.” But most of all: “putting up “Don’t Buy” in places were Israeli products are sold, is reminiscent of the darkest chapter of our history, when the signs “Don’t Buy From the Jews” were to be seen all over.

According to the FDP, the BDS Movement shouldn’t just be condemned, but its scope of operation must be curtailed. To achieve this, NGOs that call for the boycott of Israeli products, companies or individuals should be denied access to state funding. Buildings that are managed by the federal government should not be provided to the BDS campaign. Similar initiative are already in place at the municipal level, as in case of Munich.

The FDP refers to the [statement made by] Antisemitism Commissioner of the German government, Felix Klein, in its proposal. He too has called the BDS “antisemitic in its aims and actions.” The campaign is trying deligitimize the Jewish State “step by step.” [Translated by the author]

Germany is among the leading sponsors of the BDS Movement, the research carried out by the Jerusalem-based watchdog NGO Monitor shows. “The German federal government provides millions of euros to political advocacy NGOs in Israel and the Palestinian Authority, through a variety of frameworks,” NGO Monitor’s 2018 report said. “German federal funding is allocated to, amongst others, organizations that promote anti-Israel BDS.”

The proposed bill puts the ruling Christian Democrats (CDU) and Social Democrats (SPD) on the spot. Despite paying regular lip service to Israel’s right to exist, Chancellor Merkel-led coalition has kept funneling tens of millions of euros to groups that are running a vicious campaign of hate and incitement against the state of Israel.

German government’s refusal to ban Hezbollah terrorist organisation, and its decision to allow more than 900 members of the Iran-sponsored outfit to freely operate in Germany, further exposes its hypocrisy.

The story was first reported outside Germany by Benjamin Weinthal, Jerusalem Post’s Europe correspondent and fellow for the Foundation for Defense of Democracies (FDD).