Expectations Smashed as U.S. Economy Grew at 3.2% in First Quarter

Expectations Smashed as U.S. Economy Grew at 3.2% in First Quarter

This is the first time the first quarter topped 3% since 2015. 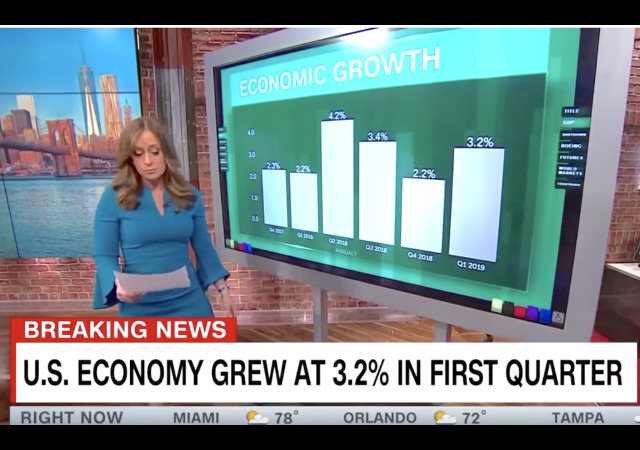 I have to admit this news shocked me after lukewarm jobs reports in January and February.

The Commerce Department announced this morning the economy grew at a 3.2% rate in the first quarter due to “higher exports and inventory investment.” Economists predicted a 2.5% GDP. 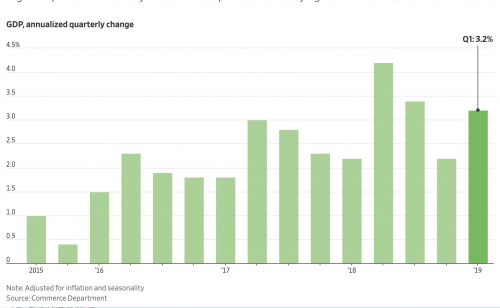 Gross domestic product—the value of all goods and services produced in the U.S., adjusted for inflation—rose at an annual rate of 3.2% from January through March, the Commerce Department said Friday. Economists surveyed by The Wall Street Journal expected a 2.5% reading.

The stronger-than-expected growth rate was boosted by a sharp pickup in the rate of exports, which rose 3.7%, a jump in state and local government spending and higher private inventory investment. Those gains were partially offset by a slower rate of spending by consumers and businesses.

The report showed the U.S. economy defied challenges including a partial U.S. government shutdown, uncertainty over trade policy with China and slowing global growth to produce the strongest rate of growth for the January to March period in four years. Compared with the first quarter a year ago, the economy grew 3.2%.

Other good news: “Disposable income rose $116 billion, or 3 percent, in the first quarter.” More money in our pockets! You know who stimulates growth and the economy? Consumers. With money in our wallets we can spend more, which helps businesses grow.

I complained when President Donald Trump placed tariffs on our exports, but three quarters have passed and the numbers don’t lie. Maybe the tariffs aren’t hurting us as much as we thought.

I say this because the “shrinking trade gap” boosted the GDP. Those exports added 1.03% to the GDP, which is the largest booth since second quarter of 2018. Our “exports continued to rise in the first quarter, while the rate of imports fell, as Americans cut back on purchases of foreign goods.”

The trade war with China worried people, but Chinese President Xi Jinping appeared to concede to Trump’s demand at the Belt and Road forum in Beijing today. From Bloomberg:

“We will establish a binding enforcement system for international agreements,” Xi said, adding that China will standardize all levels of government in terms of issuing administrative licenses and market regulation, and also “eliminate improper rules, subsidies and practices that impede fair competition and distort the market.”

Xi’s promises have been echoed by officials over the past few months and China has taken several steps to address U.S. concerns, including passing a new foreign investment law that bans forced technology transfers. Trade negotiators led by U.S. Trade Representative Robert Lighthizer return to Beijing next week as both sides work toward a face-to-face meeting between Trump and Xi to ink a deal.

Tom Rafferty, the Economist Intelligence Unit’s regional manager for China, explained that Xi “appeared to be offering his personal approval of the concessions that China is likely to make as part of an imminent US-China trade deal.” They know Trump means business and as much as we rely on China to make our goods, they know they need us just as much.

So maybe it’s not all doom and gloom as the left predicted. No wonder the 2020 Democrat presidential candidates steer away from the economy, even though that’s the main priority of the majority of Americans.

I’m sure sometime during the report, one of the anchors must have managed a smile at the news?

Deregulated prosperity? It’s almost like no one ever told the lefties that this would work! Their echo chambers certainly didn’t.

To paraphrase President Reagan, at MSNBC and CNN “It’s Mourning in America“

Next up: monthly Federal income exceeds expenditures (within six months)

Wait! But I’ve been seeing headlines for months saying a big recession is imminent. How can this be?

The first quarter has grown in each of the Trump years:

“Maybe the tariffs aren’t hurting us as much as we thought.”

Let us take note, in spite of the dire predictions, the claims that Americans would be paying higher prices, none of that has occurred.

I never tire of winning

I’m always skeptical of GDP numbers for the simple fact that GDP includes government spending. What I would rather know is how much the private sector grew.

It is amazing how well President Obama set up the economy so that things continue to work well even years after he has left office.

What is truly amazing is the communist bullshit you commies spew up with the expectation that anyone would believe it other than the brainwashed drones like yourself.

Obama is the dumbest SOB to ever hold the office. The only lasting remains of his tenure is the criminal corruption that occurred.