The Death of Due Process from Salome to #MeToo 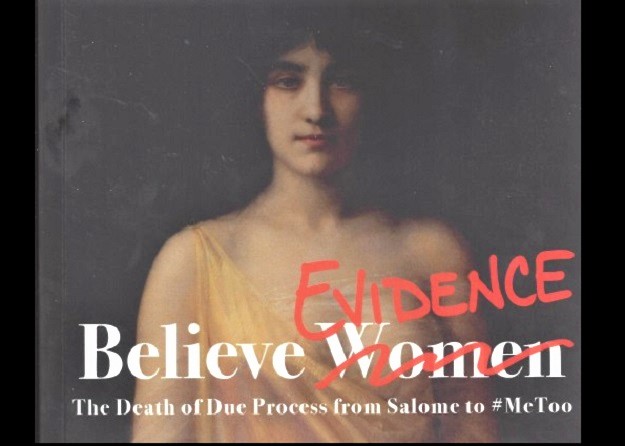 We covered the success of Unplanned, a pro-life film that had an advertising campaign essentially deplatformed by Twitter just in time for its opening weekend.

A week before this development, it came to my attention that Megan Fox, award-winning journalist, contributor to PJ Media, and successful author was facing a similar situation with Facebook. The social media giant refused to allow her to purchase ads for her new book: Believe Evidence: The Death of Due Process from Salome to #MeToo.

Since I am a big fan of solid writing, history, and men’s rights, I couldn’t wait to bypass the Facebook censors and delve into her book. I wanted to share a few notes with my Legal Insurrection friends.

Fox combines religious themes, historical evidence, and current events with wit and a critical assessment of women whose deceit has resulted in death, destruction, and despair. She serves a brutal analysis of the #Metoo insanity straight up, with a salty rim of liberal tears.

The main themes of this book are arranged in three sections: Hysterical Harpies throughout History and Literature, Lying Wretches from the Modern Age, and Battle Plan. The contemptible treatment of Supreme Court Justice Brett Kavanaugh during his confirmation process and the social media mob attacks on the Covington Catholic boys are two elements that link these themes together into a cohesive whole, highlighting the fact that many American women see their husbands, sons, fathers, and brothers as potential targets in this “Believe All Women” environment.

Of the women featured in the first section of Believe Women, my favorite chapter covered Potiphar’s Wife (surprise!).  This is one of several instances in which Fox uses the Bible to highlight the importance of evidence, and she connects the story of Joseph’s incarceration based on a false rape charge to the testimony offered by Dr. Blasey Ford during the Kavanaugh hearings.

Unlike Potiphar’s wife, who was smart enough to grab some evidence that made her story at least plausible, Ford had nothing, not even the testimony of her best friend who she claimed was there. Note to future bearers of false witness: Make sure you get at least one piece worth of worthwhile evidence in your quest to destroy a good man because without it, there is little hope of getting away with it.

Potiphar’s wife succeeded in ruining Joseph for a while, but she did not stop him from rising to one of the highest positions in Egypt eventually.

It is fitting that Brett Kavanaugh has also been elevated to one of the most powerful positions in our land after suffering the false accusations of a vengeful woman.

The one caveat I have is that the book is clearly written from a faith-based perspective. As Fox and I are both Catholic moms, I enjoyed her viewpoint thoroughly. Those looking for a more clinical look at the #MeToo moment may differ with me.

I give the book 5 stars out of 5, and will look forward to sharing the “Battle Plan” with my son before he heads out to college!

This is the fascist plan, hidden behind a cover of ‘socialism.’

This only works if you go for it. Don’t.

President Trump has presented a welcome and just in time template for fighting back against the tyranny of the left. The cataclysmic cacophony of vitriol we have endured for the last three years has finally awakened the “sleeping lion” Admiral Yamamoto warned his country’s leaders about before Pearl Harbor.

Not only did the Japanese underestimate the sleeping power of the United States before WW2, Germany did too. Even our main allies, the French and especially the British did the same thing. They relied on the peace time performances of the paeace time flag officers which ran the Army and Navy in the 1930a.

Even until the end of WW2, British officers, especially the general officers, thought the Americans were inept and quite a few were. But then again, most of the British general staff were all the way through. The same with the French. It took officers like George Patton and a few of the younger generals who were colonels st the start of the war were more aggressive in their tacticas.