Prime Minister Benjamin Netanyahu: “If at first you don’t succeed, you try again.” 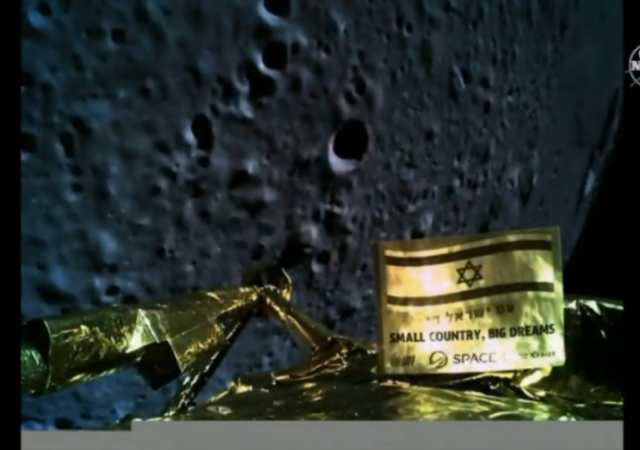 We have closely followed the launch of the world’s first private mission to the moon, Israel’s Bereseet. It entered the Moon’s orbit a few days ago and attempted to land today at approximately 3:30 pm Eastern.

“We have a failure of the spacecraft,” said Opher Doron, the general manager of Israel Aerospace Industries’ space division, which collaborated on building the spacecraft. The mood at the control center was somber but still celebratory.

“Well we didn’t make it, but we definitely tried,” said Morris Kahn, an Israeli telecommunications entrepreneur and president of SpaceIL, the nonprofit that undertook the mission. “I think we can be proud.”

Prime Minister Benjamin Netanyahu of Israel, who attended the event at the mission’s command center in Yehud, Israel, said, “If at first you don’t succeed, you try again.”.

I watched the attempted landing on the National Aeronautics and Space Administration’s live feed. The first few stages seemed to go smoothly.

The craft event sent back another selfie.

However, at 149 km, an issue arose with the main engine. Despite the fact the main engine returned, communications were lost and the team officially announced the landing failure shortly thereafter.

At 149 km, the main engine has issues and communication with spacecraft has stopped. https://t.co/eruAzlB64V

The Times of Israel is reporting the spacecraft appeared to have crashed.

#Israel’s @PresidentRuvi Rivlin says that despite a landing that wasn’t a complete success, this was an incredibly important achievement to be very proud of!

“Sure we didn’t land exactly like we wanted, but we landed. We are on the moon!” #IsraelToTheMoon pic.twitter.com/VG6vvUN9Wj

Good of them to try.

It is AMAZING they got as far as they did.

Imagine what else they must be up to that they’re not yet revaling to the world?

Metaphor for the peace process. Israel takes all the steps they can, but the Palis reject at the end

Probably got shot down by a Hamastronaut…

In all of Leslie’s posts, I believe km (kilometers) should be m (meters).

We lost a Mars probe when someone confused miles and kilometers…smacko! AND, let us not forget launching Hubble with an untested mis-ground mirror when the back up mirror from another company was PERFECT but on … the….ground.

“A navigation team at the Jet Propulsion Laboratory used the metric system of millimeters and meters in its calculations, while Lockheed Martin Astronautics in Denver, which designed and built the spacecraft, provided crucial acceleration data in the English system of inches, feet and pounds.

As a result, JPL engineers mistook acceleration readings measured in English units of pound-seconds for a metric measure of force called newton-seconds.”

I never believed the story. Nobody—not even Lockheed Martin at its corporate worst—would express total impulse in pound-seconds. That’s one of those ridiculous “furlongs per fortnight” measurements, only not as funny.

We are left with either a large screw up or an interesting question of cover up. Ray Bradbury was unavailable for comment. There was the cute cartoon from the first Viking mission where the first picture was a sign..maybe address..The sign read…Ray Bradbury.

I learned to use a slide rule at 13 years old, mistakes were typically one or two orders of magnitude.

Yep…. I had only a slide rule to slug my way through chemistry and nuc engineering degrees. At least the slide rule is “solid state” … that is …the only power failure to occur using it is between the ears.

Winnie-the-Pooh hadn’t thought about this. If he let go of the string, he would fall — bump — and he didn’t like the idea of that. So he thought for a long time, and then he said:

“Christopher Robin, you must shoot the balloon with your gun. Have you got your gun?”

“You didn’t exactly miss,” said Pooh, “but you missed the balloon.”

Amazing we did this 50 years ago.
Hope Israel tries again.

Ever wonder how many sailing ships were lost in the age of exploration?

Franklin Northwest Passage expedition for one.

I read somewhere thatLloyd’s of London estimated one in ivy five, per year during that period.

I read that Lloyd’s of London wrote off one in five ships per year.

More than half of all the people engaged in trade died.

All the people engaged in trade died. However, some of the deaths were of old age and natural causes. Others were trade related.

If landing on the moon were easy, everybody would be doing it.

I don’t recall who, but in one of the earlier posts on this mission someone was arguing it should be easy now. The truth is that vacuum tube technology was less susceptible to radiation damage than modern electronics. The same is true for relays. Comparing much modern technology to post WW2 is like apples and oranges.

The subhead at the NY Times made a snotty comment about the risks of fast and cheap. Apparently they didn’t notice that even crashing something on the Moon is more of an achievement than any writer for the NYT will ever have.

Also, if I recall correctly, both the US and the USSR made several attempts at unmanned moon landings before either of us actually *hit* the thing. For such a big rock, it dodged well. (The Wiki is fairly accurate here)

Best if read while listening to:

Of course that was half a century ago, with technology of the time.

That’ll teach you to waste your time reading the ny times.

Imagine how many other things you could have done.

Just goes to prove how racist and hateful Israel really is. They could have reached out to Tlaib and Ilhan to become the first women on the moon in a gesture of peace and harmony………..but noooooo.

That would truly have been wonderful news.

Unless, of course, they brought them back…

There is always Venus. Sort of a warm up to their ultimate afterlife.

Standard Operating Procedure in the aerospace biz is to declare it a software problem.

Goes to show how amazing the US landing on the moon was. That not only landed OK, it was with personnel, it also took off and came back! The onboard Apollo flight computer had less computing power than an Apple Watch. I suspect that the huge Mission Control computer amounted to less than an average new smartphone.
Mission Control had the right people, full of the Right Stuff.

still, for a *private* mission this is amazing.