SpaceIL Chairman, Morris Kahn: “Today I am proud to be an Israeli.” 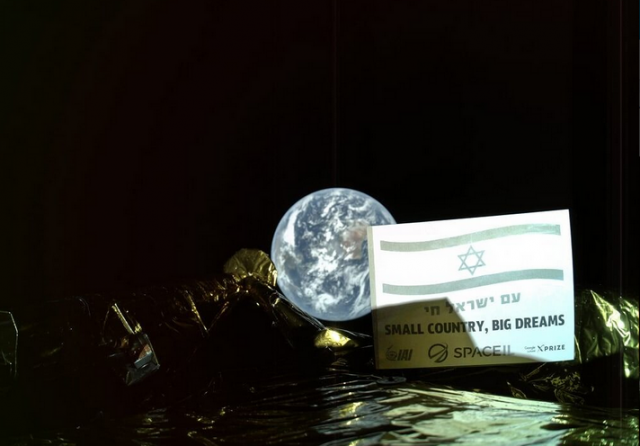 The last time we in on world’s first private mission to the moon, Israel’s Bereseet lunar mission had successfully launched and was well on its way to its destination.

Today the spacecraft entered into orbit around the Moon, ahead of next week’s landing on the Earth’s natural satellite.

At around 10:18 a.m. Eastern Time on Thursday, the spacecraft fired its engines for six minutes, slowing down enough to be captured by the moon’s gravity. Although the maneuver appeared to have been executed without problems, it’ll be half a day before confirmation that the spacecraft has entered its intended orbit.

That by itself would be a major achievement, something that has only been accomplished by five nations — the United States, the former Soviet Union, China, Japan and India — and the European Space Agency.

“After six weeks in space, we have succeeded in overcoming another critical stage by entering the moon’s gravity,” said Ido Anteby, chief executive of SpaceIL, in a statement. “We still have a long way until the lunar landing, but I’m convinced our team will complete the mission to land the first Israeli spacecraft on the moon, making us all proud.”

The designated landing spot is Mare Serenitatis, or Sea of Serenity, in the northern hemisphere of the near side of the moon.

The firm’s executive officers are thrilled with the progress of the mission so far.

SpaceIL Chairman, Morris Kahn: “The lunar capture is an historic event in and of itself – but it also joins Israel in a seven-nation club that has entered the moon’s orbit. A week from today we’ll make more history by landing on the moon, joining three super powers who have done so. Today I am proud to be an Israeli.”

SpaceIL CEO, Ido Anteby: “After six weeks in space, we have succeeded in overcoming another critical stage by entering the moon’s gravity. This is another significant achievement our engineering team achieved while demonstrating determination and creativity in finding solutions to unexpected challenges. We still have a long way until the lunar landing, but I‘m convinced our team will complete the mission to land the first Israeli spacecraft on the moon, making us all proud.”

Here is a video for those interested in today’s maneuvering into lunar orbit:

Humanity does need to have our eggs in more than one basket. Besides, maybe all the smart people will need to escape a new Muslim dark age. And where better to create a very dependable platform than above all the riff raff. Then if threatened, we can just drop big rocks:)

while demonstrating determination and creativity in finding solutions to unexpected challenges.

Unexpected challenges? Ummm . . . the first soft moon landing was over fifty years ago. Even older than VCRs and disco, and almost as old as Hual-Hoops and Frisbees. Most of the challenges are pretty well known. Even better, the solutions are off-the-shelf items—you don’t need any R&D, you just need a shopping cart.

What different challenges? Same old moon, same old vacuum between here and there, same old orbits. It’s not like finding a parking space when the thing gets there is going to be harder than it used to be. There’s more debris in Earth orbit, but that’s about it. Rockets haven’t changed much, but the electronic bits are a lot cheaper, albeit somewhat more vulnerable to radiation. It all seems overly Amelia Earhart to do handsprings over something which was accomplished aeons ago.

Now, if they’d figured out how to do the whole thing for the price of a new car, I’d be suitably impressed. Otherwise it’s the same-old same-old. Nobody conquers the future by simply repeating the past.

I am sure that Israel will build on past accomplishments, and I am ecstatic that they are doing this.

Behave yourself. We’ve been flying airplanes for over 100 years, and Boeing right now is dealing with mystery crashes.

No mystery. Boing has admitted that it’s entirely their fault.

Grow up. You don’t see Boeing waxing rhapsodic whenever an airplane doesn’t crash. Successful air flight hasn’t counted as any kind of technological or organizational breakthrough for decades, and it would be childish to celebrate it as such. Ditto for a robot moon landing.

If air travel were no safer than space travel there would be no airlines. Although there might be a few businesses that would sell a million-dollar flights to those who could pay and who really, really wanted to experience flight.

As for this achievement, keep in mind that the population of Israel is about equal to the population of the Chicago metropolitan area. Israel may loom large in human imagination but, objectively as measured by either area or population, it’s a small country.

An amazing accomplishment by an amazing nation.

The pathetic state of America is amazing accomplishment – akin to a heir destroying the fortune left to him or her.

I have a theory about why America isn’t doing great things any more: No economic incentive. Why make the effort to invent and refine some great invention…say…a Microwave Oven…only to have the idea, the tooling, and the development effort stolen by the Chinese, leaving you with no reward for your efforts. Until our government starts enforcing patents, nothing will change.

Cue the Palestinians to claim that the moon belongs to them.

The reaction of Islamic extremists to Israel’s planting of its flag on the moon should be epic.

One more example of Jews competence, while such is rare among Muslims.

Yes. By now you would think they would have a Turbo version of the camel, or at least an “SS” version with ohc.

Not bad for a “shitty little country”.

Someone should now ask Louis Farrakhan about his statement a few days ago that Jesus was 2,000 years too early to fulfill God’s mandate to destroy the Jews. Puzzling how no one other than Glenn Beck reported that.

Destruction of Jews would be an unmitigated disaster for humanity. Better to do without the rest of the Middle East.

Indeed. They will likely see if they can fly a firecracker on plastic bottle and burn a tomato field. But equally likely….Muslims and Democrats will just inform us muslims invented the moon, rockets, space travel, computers, mathematics and clothing. Because we all know about Muslim accomplishments from liberal.

Just wait until Israel gives them a mineral rich rock to mine. I am of the belief that people calling themselves palestinians are close to the most useless people on the planet.

“Today the spacecraft entered into orbit around the Moon, ahead of next week’s landing on the Earth’s natural satellite.”

Is this from the Department of Redundancy Department?