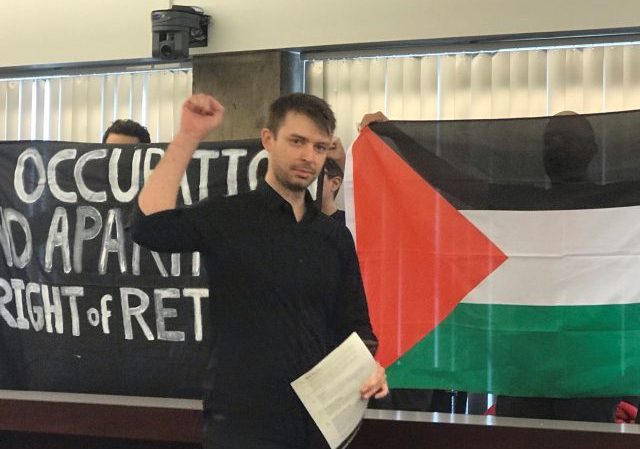 Kontorovich’s expertise includes international law, as well as free speech. His lecture The Legal Case for Israel is a must watch video.

Kontorovich also has lectured on The Legal Case for Israel’s ‘Settlements’. He is widely quoted in the media, including on the recent recognition of Israel’s sovereignty in the Golan Heights.

The First Amendment protects speech, not conduct. In the 2006 case Rumsfeld v. FAIR, the Supreme Court held unanimously that the government can deny federal funding to universities that boycott military recruiters. Even though that boycott was based on political motives, that did not make it protected speech.

Similarly, the act of boycotting Israelis does not in itself express any particular political viewpoint. Companies may boycott Israel to curry favor with Arab states or out of mere anti-Semitism. They may hope to avoid harassment from the BDS movement or simply cave in to pressure from Palestinian groups.

The legality of anti-BDS laws was the topic on which Kontorovich was to lecture recently at the University of Chicago Law School.  BDS activists didn’t want him to speak, so they disrupted the event. 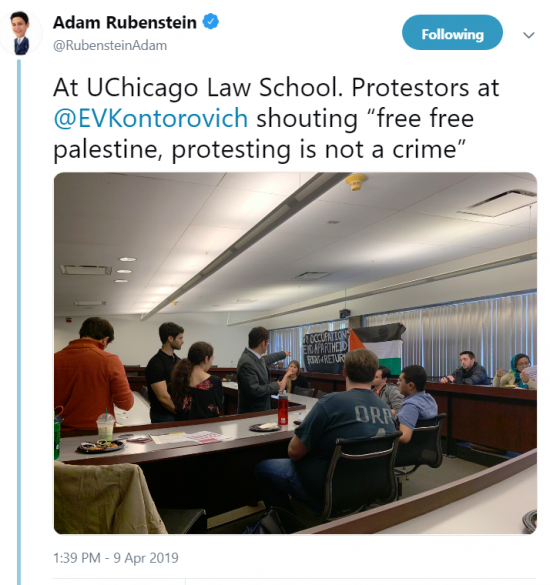 George Mason University Law Professor Eugene Kontorovich attempted to deliver remarks to law students at the University of Chicago Tuesday, but was heckled by several protesters who successfully drowned him out. These activists were eventually removed by security.

Eyewitnesses told Reason that the hecklers were not enrolled at Chicago, though one student did attempt to record Kontrovich on a cell phone, and was silently involved in the protest.

Kontrovich, an alumni of the law school, told Reason he had been invited by a student group to discuss the First Amendment as it pertains to laws that target the Boycott, Divestment, and Sanctions (BDS) movement, which calls for direct action to oppose Israel’s treatment of the Palestinians. A group of about five pro-Palestinian activists showed up for his talk and shouted over him as best they could, making it very difficult for attendees to hear.

“During the first few minutes of this disruption, Professor Kontorovich could not proceed with his lecture,” Seth Cohen, a student who attended the lecture, told Reason.“After about five minutes, we gathered around Professor Kontorovich, and he attempted to resume the talk. The protestors raised their voices.”

Kontrovich attempted to engage the protesters, but they merely continued to shout over him.

The disruption was prolonged and continued until the police showed up. Clearly this was an attempt to shut down the event completely. Soave reports:

Eventually, a school administrator—Dean of Students Charles Todd—entered the classroom and tried to persuade the activists to leave. They “smiled at him and continued chanting,” according to Cohen. Later, the police arrived, and then the hecklers left.

Todd sent a campuswide email Tuesday evening in which he claimed the individuals causing the disruption were non-students.

“These disrupters were issued trespass warnings and asked to leave the premises,” wrote Todd. “This chanting did violate the University’s policies. It is the right of any speaker invited to our campus to be heard and for all who choose to be present to hear the speaker. Moreover, it is the right of members of the audience to ask tough questions of those speakers. The heckler’s veto is contrary to our principles. Protests that prevent a speaker from being heard limit the freedoms of other students to listen, engage, and learn.”

Kontorovich confirmed to me the accuracy of Soave’s reporting, and told me he didn’t have any video of the disruption. He did send these two photos he took while standing as the protesters disrupted the lecture: 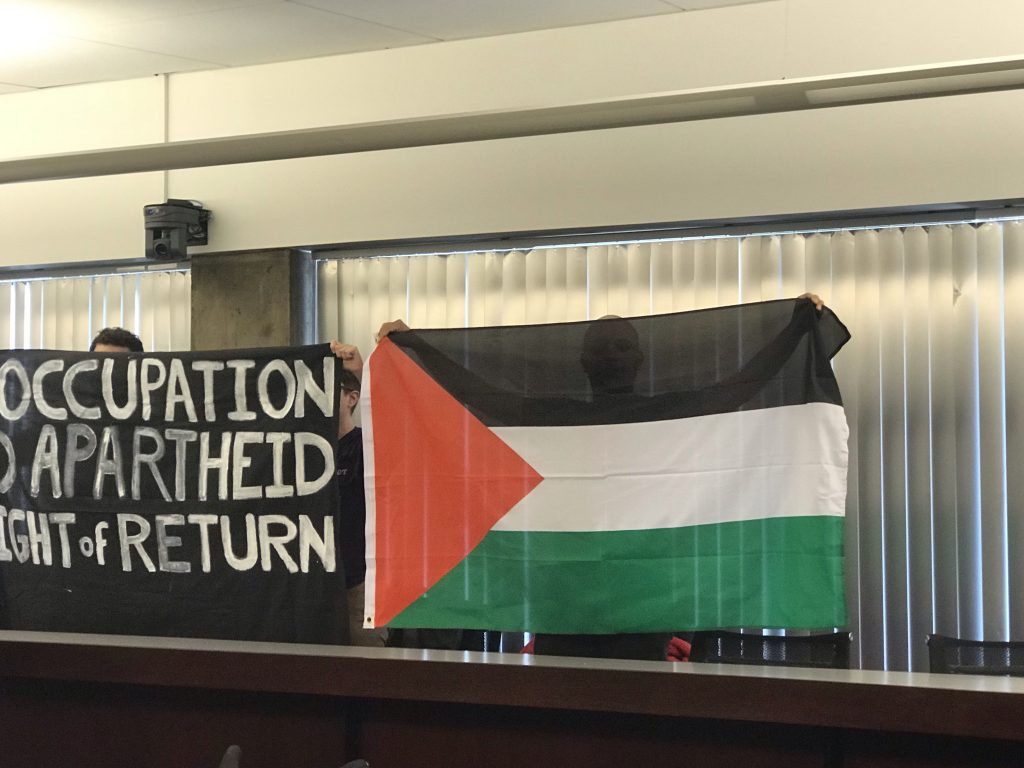 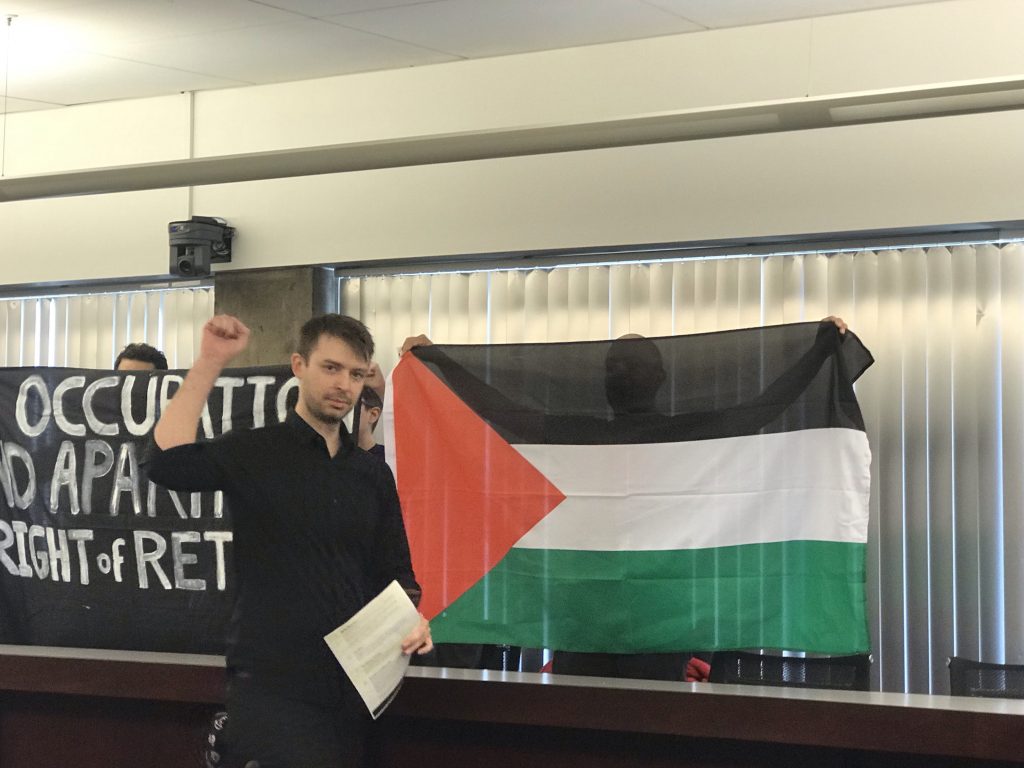 Kontorovich also provided this statement to me:

I don’t sweat these things. I don’t need a safe space, but it is a shame for the students who wanted to hear me talk. Since these tactic can’t actually be persuasive, their real point is to create a toxic atmosphere around Israel in general, create an association in people’s minds between it and unpleasantness. Students interested in open debate should make clear they do not find these tactics intimidating at all – and the best way is to invite more speakers of exactly the kind these disrupters would not like.

BDS activists continuously whine that their voices are being silenced. To the contrary, they continually try to silence pro-Israel voices.

The left is reduced to the fascist’s veto.

These people need to be freed of their misery, permanently.

Regarding the right to return, Jews most certainly have that right, their claim predates any other claims. They really should clean all the vermin out of Gaza and the West bank, and fill those areas with returning Jews.

First the Saturday people. Then the Sunday people.

I have been blessed to know a number of Jewish immigrants to this country. I’m quite sure that for most of them our political viewpoints widely differed, but that didn’t involve our friendship. I only knew one Auschwitz survivor, and he was a Polish Catholic Priest. The Nazis hated both the Saturday and many Sunday people. Different reasons, same hatred.

Todd sent a campuswide email Tuesday evening in which he claimed the individuals causing the disruption were non-students.

This hardly matters. Your campus either provides a forum where information can be disseminated and ideas can be heard . . . or it doesn’t.

“Protesters” is to antiseptic a term for people who do this stuff. Try Fascisti. That seems appropriate.

“Protesters” is actually a weak and misleading label. Non-leftists compete with ideas and liberty. Leftists compete with force. If you show up to a street fight with ideas and requests, you will get your ass kicked right off the planet. These people do not listen nor engage in any form of discussion deliberately. People must stop treating these leftists as “protesters.” These leftists are soldiers and they are fighting a war. They view anything other than force as weakness for losers. There are two sets of rules of engagement in play here.

Wait, so he’s the one saying BDS laws are legal, and they’re protesting him? Idiots.

No, laws requiring someone officially state they aren’t participating in BDS. These were so far overturned (there is a difference between requiring a “loyalty oath” and some overt action, which seems lost in this discussion).

In an age where there are likely to be more Omars and Talibs, it is dangerous to allow anti-BDS legislation today because it will be anti-Israel legislation tomorrow. All those blue states filled with the children of Muslim refugees that can now vote, and AOCs – the Pharoahs that knew not Joseph.

We can’t say an official prayer in government schools, but they can either reject BDS – or enforce BDS.

I don’t think this is what the founding fathers had in mind.

“Yes, I’m against Israeli apartheid, but I’m not against Israel’s right to exist alongside a Palestinian state, and I’m not anti-Semitic. And yes, I support free speech, but hate speech must be called out.”

“Yes, I’m anti-Semitic, but only until the Jews stop their oppressing, apartheid ways. And yes, I support free speech, but any speech which aims to validate the existence or creation of an apartheid state is violence and the violent speaker must be met with violence.”

The hollowed eyes of a shark or the non-blinking eyes of a cobra are what you see with this group. They mouth their respect for others but it is obvious they hate to the bottom of their souls. Think of every protest that the left/islam does and it will involve hate for another group.