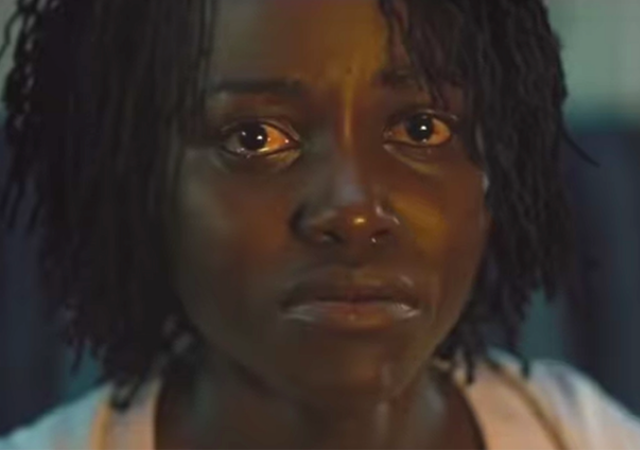 In the opening minutes of Jordan Peele’s Us, we see a depiction of a seashore carnival being attended by a large group of diverse and wealthy people circa 1986. It’s an idyllic, colorful and exciting vision of comforting and happiness in American life. A young family and their daughter win a Michael Jackson T-Shirt in a game, buy candy apples and explore the various rides the park has to offer. Yet there is something churning under this beautiful wonderland of lights and prizes.

In one moment though, this park opens up to a new reality. Merely by taking a wrong right turn, the daughter finds herself descending a staircase to a dark rainy beach with only a single ride called “Shamen’s Quest”, peppered in overt and moderately racist references to Native Americans. There she encounters a house of mirrors, deep inside which she finds herself face to face with something she cannot understand: another version of her.

This is the overt duality at the heart of Jordan Peele’s Us. Beautiful, rich and happy peoples sitting right on top of something demonic and inexplicable.

Complex Themes in Service to a Difficult Message

There’s a bit of contention online amongst film critics and movie fans so far in what the actual meaning of the film is. Is the movie primarily commenting on the internal forces in our lives we fear to let get unleashed on the world or does the message skew further into the same progressive satire?

Maybe the direct allusions to pseudo-progressive movements like “Hands Across America” are jabs at progressive issues like gentrification or neo-liberal corporatism that seeks to put progressive looking band-aids over major societal problems. I’d be hard pressed to assume that there aren’t some direct political allusions being made given Jordan Peele’s previous success with political messaging.

That ultimately begs the question. What is Us about specifically? It’s peppered with clues and allusions to topical political issues like cultural appropriation and redlining. At the same time, it comes off as far more vague and complex than its predecessor.

In an interview with the Los Angeles Times, Peele said “I think (Us) is more than a political movie… but in the post-Trump era, the finger-pointing in this country was turned up to a whole different notch… The feeling that we all feel we are the good guy in our own story prevents us from facing our demons… I wanted to make a movie that allows everybody to face their demons, in whatever faction you want to put this movie through the prism of. ”

It’s clear in context with his intent that Us is fundamentally about the core of society beneath the artifice. It posits that once the bandaid is ripped off the ugliness of humans will pour out. He’s not pulling punches. Like Get Out, he’s filtering this interesting idea through a progressive lens.

The implicit assumption of the film is that American culture has a problem with complicity and being honest about its failures. This is hardly a new notion. John Ford was making movies about the mistakes of America’s founding mythos as early as the 1940s with movies like Fort Apache, The Searchers, and The Man Who Shot Liberty Valance.

The Consequences of Get Out

As much as Us deserves commendation for its spectacular craft and thematic complexity, it’s worth considering what kind of conversation it’s lending itself to. Get Out’s success went far beyond critics supporting the technical craft. Most horror films never get Oscar nominations and yet here this one won one. Critics loved it because it fundamentally reinforced their beliefs about identity politics, cultural appropriation, black fetishization, and microaggressions.  One prominent film critic even went as far as to call it the movie of the decade. Us is ultimately going to drive the conversations on contentious issues in much the same way.

Once again Jordan Peele has crafted an excellently made horror film that perfectly explores the ideas that he wants to use to shape the public conversation about contentious issues. It’s unfortunate that so far his movies have come to the same conclusions. Considering how much flak rare critics of his movies were berated with, maybe Peele might due for some additional thought about where the power in society lies.

“Merely by taking a wrong right turn, the daughter finds herself descending a staircase to a dark rainy beach”

Is this a take-off on the Sherman McCoy take-a-wrong-turn-in-the-Bronx-and-your-life-will-never-be-the-same story?

Uh, hard to imagine what could be worse? Star Wars # whatever? Auquaman (is that one word or 2? who cares) XII?

A “seaside, amusement park”… What a novel setting for a horror movie involving sea monsters. Unless you are over 60. I was scared sh*tless by the Beast From 20,000 Fathoms. I couldn’t sleep and neither could my little brother, but we could not get past the stairwell to our parents room, because it was surely lurking there.

I have no idea what the attraction is, but those sea monsters have a serious appetite for roller coasters.

I had noticed the apparent death of “Dark City (1998)” like movies until just recently.

Wait.
Jordan Peele?
The guy who has announced that he will never cast a white person in a lead role in his movies?
AYFKM? And you’re promoting this guy’s work here? Are you sentient?
Remind us who the heck is Tyler Hummel and why is he here?

I agree, this guy’s movies and the work of his ilk should be shunned like a leper from a CA elementary school (that’s Riverside Co., where we now get to experience in real time a revival of Hanson’s disease, in addition to the nationwide measles outbreak).

In retrospect, a little harsh. It’s not the leper’s fault. The opinions of Jordan Peele, however, are all entirely his fault. So, don’t shun the leper. Shun him.

His wife is a white comedienne/actress on “Brooklyn Nine-Nine”. I thought that was odd considering his wife… Not sure what to make of it.

Just another racist that I won’t give a single dime to.I gave the first one a shot and it was underwhelming to say the least. This new one on the heels of never hiring a white person in a lead role,,,,just another person’s movie to ignore.

Get Out was boring, stupid, slow, and completely forced. I guess I can barely see how it resonates with a handful of idiots, most of whom can’t seem to stop hanging around college campuses for meaningless degrees. However, most of America won’t really enjoy it and just merely put up with it.

Relax people, this guys is the resident film critic. He is going to give a complete analysis of a movie and its theme and roles without hand wave dismissal.

If you read the whole thing, it is even-handed.

I like the article, but just like others, Peele had already convinced me not to patron his social engineering experiments ever again.

Oooohh, what an iconoclast.

History makes it fairly clear that it’s the left turns which are wrong.

It’s a friggin’ stupid made-up make-believe imaginary movie. In the “horror” genre. One of thousands in the horror movie genre. Dozens are released all year long every year – year after year after year. Most go straight to DVD, or NetFlix (same thing). Albeit, most of them are evìl whitey movies made by evìl whiteys and starring evìl whiteys. In this particular case, it’s made by a black and proud hardcore racist. The author of the post treats it as if this movie is some mysterious long lost answer to the meaning of life. The meaning of human existence itself – if only we could decipher it and its intent! ERMAHGERD!

What does it all meeeean? It’s a double complete rainbow! Right in my front yard. Oh my god! Oh my god, what does it mean? Tell me. I don’t know what it means! Oh my god it’s so intense. Oh my god!

Honestly, it’s a stupid horror movie with no redeeming value whatsoever made by a truly degenerate self-professed proud racist. The flick means nothing to anything or anyone but the hardcore racist who made it, the greedy Hollywood cesspit in general, and the squeeing little fanboys and fangirls.

I have a better idea. Go subscribe to the Cover your ASP channel.

It will change your life and probably save it at some point.

Thanks for convincing me not to bother seeing this movie. I like horror but you’ve made this one sound downright silly.

if i want a lecture, i’ll talk o my wife…

Hollyweird can keep it’s lectures and i’ll keep my money.

Here’s a contentious issue about race:
How about I don’t care about a person’s race? Can I like someone because they’re nice/funny/smart/cool/friendly etc? Or do I need to like someone because of their color?
How about a co-worker who is a smart/competent/efficient/dedicated engineer instead of a white or black or female or Hispanic engineer?
Maybe I’ll see a movie starring someone that I admire who won’t insult me and liking the movie because it’s a good movie and such.

A few words to live by that a lot of the country seems to have forgotten:
“I have a dream that my four little children will one day live in a nation where they will not be judged by the color of their skin, but by the content of their character.”

Gosh, I’ve forgotten who said that….

“The implicit assumption of the film is that American culture has a problem with complicity and being honest about its failures.”

Really? I posit that we’re a country obsessed with its shortcomings. We endlessly dwell on our ‘original sin’ and all sorts of real and imaginary contemporary problems. To a fault!

The underlying problem is the fraud underlying ‘barack hussein obama’ (or whoever he really is.)

That poisonous puppet and his equally fake trans wife – and their handler, Jarrett – have spread the most virulent hate ever seen in this nation. The forces behind this creeps are the most sinister our nation has ever fought against.

At least the communists and the nazis and the Imperial Japanese had standing foreign armies. The ‘obama’ army is the enemy within.

I come at you as someone who is a from a long line of takers (only one is a life giver), frontiersmen, and outdoorsmen.

That is so bold. I can barely contain myself.

I just got a message from the poison control center.

I can’t believe I got this, but on the other hand I can’t tell you it’s a bad idea not to drink brake fluid.