Trump tweet: “Book is exact opposite of his fake testimony, which now is a lie!” 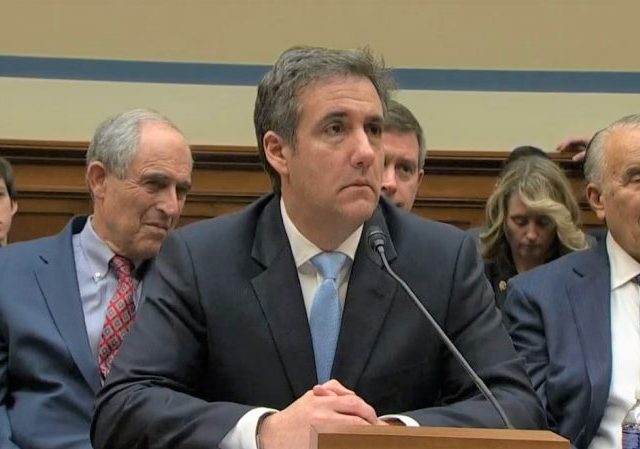 During his testimony before the House Oversight Committee, former Trump “fixer” and attorney Michael Cohen came across as a whiny, lying opportunist who may have violated not only lobbying but also perjury laws.

This impression was not helped when it was revealed after his testimony that Trump is a “racist,” a “conman” and “a cheat” that he had been shopping a pro-Trump book that argued the exact opposite.  The president, of course, had a field day with these revelations.

Here are the president’s tweets:

The president’s tweets come after the Daily Mail exclusively obtained a proposal reportedly dated Jan. 24, 2018 and titled “Trump Revolution: From The Tower to the White House.” Cohen reportedly was shopping the pitch to publishers just weeks before the FBI raided his office as part of the U.S. Attorney for the Southern District of New York’s criminal investigation into his personal business dealings.

According to the Daily Mail, Cohen’s book would have touted Trump, countering descriptions of his then-boss as “crazy,” “dumb,” “paranoid” and hateful toward the media.

The pitch reportedly said: “All of these things have been said about my longtime boss, Donald J. Trump. None of it is true. Except maybe that last one – about the media. Trump does believe that reporters are out to get him, and for a very good reason. Many of them are.”

The Mail reported that Cohen promised chapters would focus on first lady Melania Trump and Trump’s children, as well as the “unfortunate saga” of Stormy Daniels.

“By offering my point-of-view, it is my sincere hope that I can help close or at least narrow the knowledge gap,” he reportedly wrote.

Ultimately, Cohen is impossible to support . . . for either the pro-Trump or anti-Trump side.  He’s a proven liar (admitted perjurer) and opportunist who is perceived to say anything at any time to further his own ends.  The voting public will take note.

The Daily Mail has more.

President Donald Trump is not crazy. Nor is he dumb or paranoid. Certainly he is not in over his head. Is he a liar? Nope. And he is not addicted to TV either.

Who says so? None other than Michael Cohen, the president’s former lawyer and fixer who eviscerated Trump in three days of testimony before Congressional committees this week.

Cohen’s comments were in a book proposal that the jail-bound disbarred attorney was shopping around in the weeks before the FBI raided his offices last year. DailyMail.com has reviewed a copy of that proposal.

At the time he had nothing but good things to say about his boss who had entered the White House a little more than a year earlier.

Cohen was pushing a book with the working title ‘Trump Revolution: From The Tower to The White House, Understanding Donald J. Trump,’ that he proposed to write.

He sent his book to several potential publishers last year, and one, Hachette, reportedly was willing to pay him three-quarters of a million dollars for his wise words.

But Cohen, who is due to start a three-year prison term in May for crimes including tax evasion, lying to Congress and making false statements, thought he could do better and continued to seek more money, DailyMail.com can reveal.

Either side who trumpets anything Cohen says can be justly accused of cherry-picking to further their own political agenda. At the end of the day, Cohen is just a sad case of political opportunism meets . . . prison.

yes it is weird. His testimony sounded so much like the Democrats talking points. So am I losing it and the Democrats are right or are things really messed up. I think they are messed up.

If they can prove that, heads should roll

It’s pretty obvious he was told what to say, what not to say, and is kept under control of the SC by threats against his wife and her role in getting tied up in a (supposedly) fraudulent loan on the taxi end of the business. It would not shock me in the least if the SC goes back on the agreement and throws her in jail the minute Cohen is no longer useful.

I think so as well.

Where is the investigation into the hillary clinton campaign, the FBI and CIA? (Hear that comey and john brennan?)

Where is the investigation into the uranium deal between hillary clinton and russia?

Where is the investigation between obama and ordering spying on the Trump campaign?

Where is the investgiation into hillary clinton and her treasonous activities with her bathroom computer server?

Where is the investigation about the billions of dollars in cash deliverefd by obama to iran?

Where is the investigation into dianne feinstein’s employing a Chi Com spy for 20 years?

Where are nancy pelosi’s tax returns?

Where are harry reid’s tax returns?

Where is al sharpton’s payments to the IRS?

Where are adam schiff’s tax returns?

The Socialist-Democrats (and some Never Trumper alleged Republicans or alleged conservatives) have Trump Derangement Syndrome (TDS). We have people suffering under the delusion that there was ever any possibility The Hildabeast would ever suffer any actual prosecution for her many crimes. Or that any of her supporters, who worked to eliminate Donald J. Trump from the election and then President Trump from the Oval Office, would see a day of reckoning. Well maybe one or two, MAYBE. But most, if not all, will skate with perhaps a slap on the wrist for a chosen few to show the rubes that there is “justice” after all.

Wow. Clinton apparatchik Lanny Davis’ law license will be in jeopardy, if it turns out he had any knowledge of Cohen’s assertions in the book proposal and yet still let Cohen appear — heck, Davis prepared him, no doubt — and tell lies under oath.

Lynne Patton: “Michael Cohen turned on the President because Mueller threatened to throw his wife in jail for up to 30 years”…

He’s in a tough spot. It would be weird if he didn’t try to wriggle around a bit.

Maybe he deserves it, but it’s a tough spot nonetheless.

I agree. When the dust settles when will probably be able to talk about the kinds of tactics being used against him. Regardless, Mueller’s wings need to be clipped.

“wriggle around a bit”

I thought that was a Jerry Lee line in a song.

Neither a reason, nor an excuse, to commit perjury. but I have to admit it is rather delicious for the Socialist-Democrats to have invited a felon convicted, among other charges, of lying to Congress to appear before a House Committee and have said felon lie to Congress in his sworn testimony.