Looks like the testimony brought up more legal problems for Cohen. 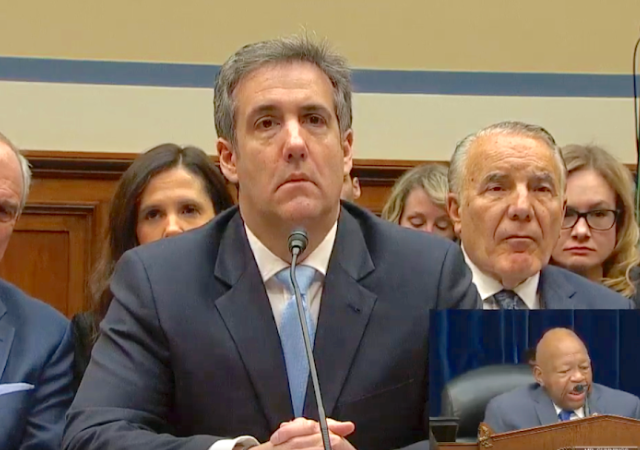 Both of these concerns came up when Cohen testified in front of the committee on Wednesday.

During the testimony, Meadows filed a criminal referral against Cohen, in which he claimed the former lawyer violated the Foreign Agents Registration Act (FARA).

Meadows asked Cohen about “money he received from BTA bank in Kazakhstan.” Cohen explained that the bank’s “former CEO had absconded between 4 to 6 billion,” some of which was here in America. The bank asked Cohen for help “in finding, locating that money and helping them collect it.”

During Cohen’s hearing, Meadows, R-N.C., blasted Cohen for not listing his “foreign contracts” on a “Truth and Testimony” form he was required to fill out prior to his hearing, and called it a “criminal offense.”

“This is just one more example of you skirting the truth,” Meadows said to Cohen.

Cohen explained that he reviewed the form with his legal counsel, and interpreted the directions differently, but would amend the document before the end of the day if necessary.

The letter cited information from the U.S. Attorney’s Office in the Southern District of New York (SDNY) — where Cohen had been under criminal investigation–which outlined “a substantial amount of consulting business for himself throughout 2017 by marketing to corporations what he claimed to be unique insights about and access” to Donald Trump.

Meadows and Jordan asked Attorney General William Barr to have the DOJ investigate Cohen over perjury during the testimony. From Fox News:

“We write to refer significant evidence that Michael D. Cohen committed perjury and knowingly made false statements during his testimony before an Oversight and Reform Committee hearing,” they wrote. “While testifying under oath, Mr. Cohen made what appear to be numerous willfully and intentionally false statements of material fact contradicted by the record established by the Justice Department in United States v. Cohen.”

They added: “Mr. Cohen’s testimony before the Committee at times was in direct contradiction to assertions contained in pleadings authored by the United States Attorney’s Office for the Southern District of New York (SDNY.) There are other instances in which Mr. Cohen’s statements to the Committee were immediately contradicted by witnesses with firsthand knowledge of the subject matter.”

Cohen previously pleaded guilty to one count of lying to Congress, in relation to past statements before a Senate committee.

The letter included 20 pages of examples, but there was one that took on Twitter. Cohen claimed he did not want a job in the White House, but even CNN’s reporters said they knew this wasn’t true.

CNN: Cohen isn’t telling the truth when he said under questioning by Jim Jordan that he didn’t want a job in the White House.

Dana Bash: “He very much wanted a job in the White House.”

In this 2016 interview with @ChrisCuomo, @MichaelCohen212 says he “certainly hopes” he’ll get a job in Trump’s White House.

Cohen denied aspiring to work for Trump during testimony before Congress. https://t.co/2OT6SKLzc0 pic.twitter.com/9Xxw9LvMHv

Cohen strikes me as a small-time babbler, always shaping his story to whatever he thinks is “current day” jargon. And Congress looks like a cat playing with a mouse. Even the local paper in San Diego, California thinks this hearing was a waste of time.

notamemberofanyorganizedpolicital in reply to Valerie. | February 28, 2019 at 10:48 pm

Wonder what the F.I.B. threatened to do to him and his family if he didn’t Lie for the F.I.B.?

alaskabob in reply to notamemberofanyorganizedpolicital. | February 28, 2019 at 11:49 pm

As I understand it … his wife also signed the fraudulent bank documents and that potential case and prison time was the pressure they put him under.

On Rush today… a liberal said that Trump was a poor choice of character for having an attorney like Cohen… lies and disbarment. Hum… how about Hillary and Bill? Both excellent examples of the legal profession…..

I think Cohen has been a BS artist all his life, and because he has gotten away with it for far too long, he is incapable of grasping why he is in so much trouble now.

I am getting really sick of clicking on what purports to be a title or the comments of random articles here, and getting some ad from IONOS and their stupid websites.

I do not know why this is happening, but IONOS is now on notice that I will never, ever buy anything from IONOS or any related company, I am that annoyed with their intrusive advertising.

I would not be surprised if this is some sort of hack by a scummy troll trying to mess up this website.

I’ve found that re-loading the page works. That is, once the page is re-loaded the ads tend not to appear again, although there have been times when they have. Also, moving the cursor to the black area in the left-hand corner of the LI banner reveals whether an ad is embedded there.

I have my AdBlocker turned off at the Professor’s request, but never see any ads. I’m using Firefox. You?

The dems own him and everything he says. Despite testimonial statements re his culpability and with a demonstrable inability to tell the truth, their star witness rules their world. MAGA.

He calls himself a fool. I call him a lying little dipstick.

Cohen got express consent from Cummings Sfiff , Lanny Mueller and Hillary that all lying would bv protected .
The minute Lanny Davis entered this fiasco it went off the rails . The representation Lanny is giving Cohen is malpractice.

dmi60ex-
Sorry about the downvote. Was hitting reply.

No competent, professional, experienced, ethical attorney would dare allow his client to testify in front of Congress under oath after being sentenced for lying to Congress. But there he was, sitting directly behind his dolt of client, allowing Cohen to be exposed to more criminal liability. There was zero upside to this for Mr. Cohen. But for Lanny? FaceTime on a national stage. Disgusting. .

I have a feeling, given Davis is his controller, that Cohen is going to have a healthier bank account because of this latest appearance in Congress.

Cohen doesn’t have a normal morality code. I can see him being offered “goodies” so long as he testifies in front of Congress of the horrors of Trump. I hope he ends up with spending more time in jail. I hope he feels the payoff he got was worth it after he is made to keep picking up the soap.

Cohen is like a pig roast, he is being slowly cooked.

Yeah, I’m sure the DoJ is going to jump right on this…/sarc

Cohen may just be stupid. More likely, he’s directed on what he says and the payment is keeping the wife from jail.

notamemberofanyorganizedpolicital in reply to Barry. | February 28, 2019 at 10:50 pm

All from the Deep State and the F.I.B.?

Cohen is a fool for letting Lannie Davis pretend to represent him. Lannie Davis only represents the interests of the Clinton gang. Now, Cohen will pay for his following their counsel.

Hey, a free lawyer, provided by the lifetime enemies of your previous employer. What could possibly go wrong? (snerk)

Now remember Mueller was revealed to have conferred criminal immunity on Cohen for any testimony in front of Congress yesterday. Mueller. Not Congress (which would have to vote as a whole on the issue).
Makes one think Mueller, the DOJ and the Democratic Party are all the same thing.
And no. I would not trust Barr anymore than the obvious crook, Wray of the FBI.

Hm. Does Mueller have the authority to extend immunity to a perp testifying *to a different branch* of the government?

Cohen is an expendable tool of the deep state. A pathetic tool.

I bet that when this is done the double cross Cohen.

Don’t all these people understand that Cohen is lying in the service of the left? This is not a chargeable offense? Isn’t “false but accurate” a legal thing?

Isn’t our democracy and justice system under complete attack when one person can “lie” about whether he wanted or didn’t want a job with the WH/president. Lock him up or better still off with his head or as they say in Texas – hang him high and do it now. Ok, ok, ok, I admit he sounds like a total sleeze bag and maybe didn’t report his foreign dealings and maybe he is a tax fraud. Please proceed accordingly and report on page 123 of the Mississippi Free Press. But nothing close to a russian spy on Putin’s personal payroll. Next.

Maybe Cohen thinks going to jail is the best way to get a book deal.

It will at least give him a lot of time alone to write!