Reminder: Ahlam al-Tamimi, the Savage of Sbarro, is still free in Jordan

Reminder: Ahlam al-Tamimi, the Savage of Sbarro, is still free in Jordan

Maybe this will be the year Tamimi will be brought to justice in the U.S.

Ahlam al-Tamimi is back in the news again.

Tamimi helped carry out the 2001 bombing of the Sbarro Pizzeria in Jerusalem. We have covered the bombing and Tamimi’s role, many times.

Our most recent post about the bombing summarizes what happened, We Remember: Sbarro Pizzeria Massacre, Jerusalem, Aug. 9, 2001

On this day back in 2001 a depraved woman—Ahlam Tamimi—delivered a human bomb to a packed downtown Jerusalem pizzeria at lunchtime, Never forget: Sbarro Pizzeria Massacre, Jerusalem, Aug. 9 2001.

Fifteen people, including two U.S. citizens, were murdered in this Hamas-orchestrated attack.

In various interviews that she’s given over the years, Ahlam Tamimi—who masterminded the massacre—has admitted to choosing the popular Jerusalem restaurant for attack because it was full of families, and she also admits on video to being happy that so many children were killed. Here’s one such video, but many others are available online and are embedded in our prior post.

In a number of prior posts, we’ve written about this monstrous attack in the early years of the second intifada, a nearly six year wave of terror violence against Israeli civilians that resulted in the murder of over 1,000 innocent men, women and children.

We’ve also highlighted what has become a multi-year effort to bring Tamimi to American justice. Here are a few of our prior posts about this fight for justice (others can be found at this tag):

Basically, as we discussed in our posts, the problem is that Tamimi is now living in Jordan where she is adored and treated like a national hero. Her planning and participation in the heinous attack on Jerusalem’s Sbarro pizzeria in 2001 isn’t considered terrorism but a “heroic act of national armed struggle” for Palestinian self-determination, so that’s why she’s shielded by Jordan’s regime and its courts and is so admired in Jordan and celebrated across the Arab and Muslim world.

It’s also important to note that Ahlam Tamimi, a relative of Ahed Tamimi, is praised as a hero by her extended family and in her home village of Nabi Saleh in the West Bank, with whom international so-called human rights activists continue to visit in order to protest Israel’s ‘occupation’ and to oppose the security barrier constructed in response to the Sbarro and dozens of other terrorist attacks.

She’s a monster who took pleasure in killing:

Jason Greenblatt, the U.S. Special Representative to the Israeli-Palestinian negotiations, tweeted on March 11 a reminder that Tamimi still is free in Jordan and that there is a reward for her capture:

Americans ought to know that Ahlam Ahmad al-Tamini, a convicted Hamas terrorist who, together with others, murdered in cold blood 15 people including 7 children, lives free today. See details here: https://rewardsforjustice.net/english/ahlam_al_tamimi.html 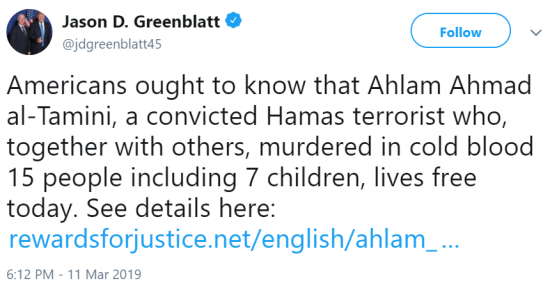 Ahlam is free in Jordan, having been released in the 2011 hostage deal that saw over 1000 Palestinian terrorists released for Israeli soldier Gilad Shalit. But because Tamimi also killed two American citizens, she was charged in the U.S., but Jordan refuses to extradite her.

Here’s the wanted poster for Tamimi: 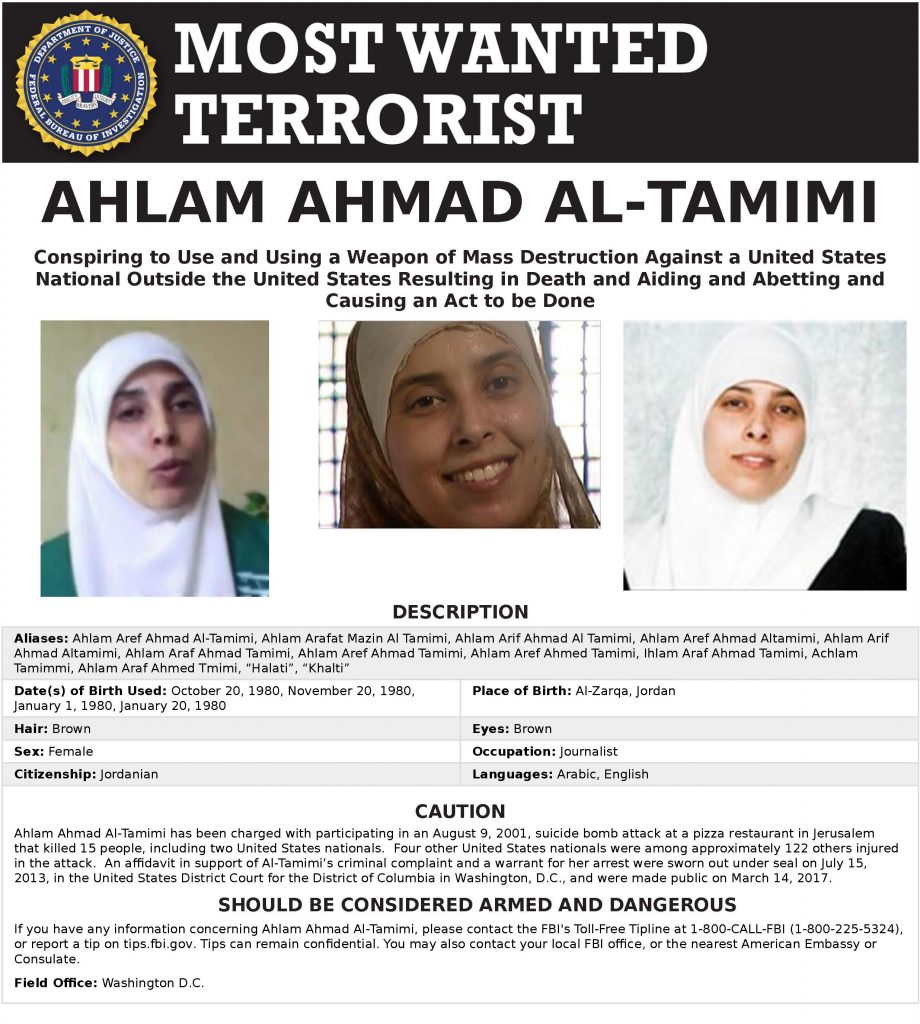 Tamimi is upset about Greenblatt’s tweet, and does not consider herself a terrorist. Echoing language you here on U.S. campuses from groups like Students for Justice in Palestine, Tamimi considers her bombing of the Sbarro Pizzeria an act of resistance. Arutz Sheva reports:

Ahlam al-Tamimi, a Jordanian terrorist who assisted in the 2001 suicide bombing in the Sbarro restaurant in Jerusalem, responded to a tweet by US Middle East envoy Jason Greenblatt, who linked to the State Department’s Rewards for Justice program which offers financial rewards for information on the whereabouts of terrorists, including Tamimi.

Tamimi, who served a prison term for her part in the attack at the Sbarro restaurant and was released as part of an exchange deal with Hamas, said that Greenblatt’s remarks showed that he is a “racist figure working for the occupation.” …

Tamimi rejected the description of the Palestinians as terrorists and the statement that she herself is a terrorist operative. “The United States and Israel are two sides of the same coin, and both serve the same goal, which is the Zionist enterprise in the region,” she said.

Tamimi noted that the Americans want to prosecute her for her involvement in the killing of two American citizens “in the framework of the division of roles with Israel in the persecution of Palestinian fighters.”

The family of Malki Roth, killed in the bombing, tweeted out their hope that Greenblatt calling attention to Tamimi would help bring her to justice: 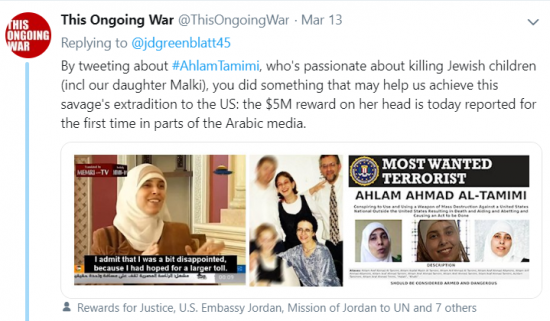 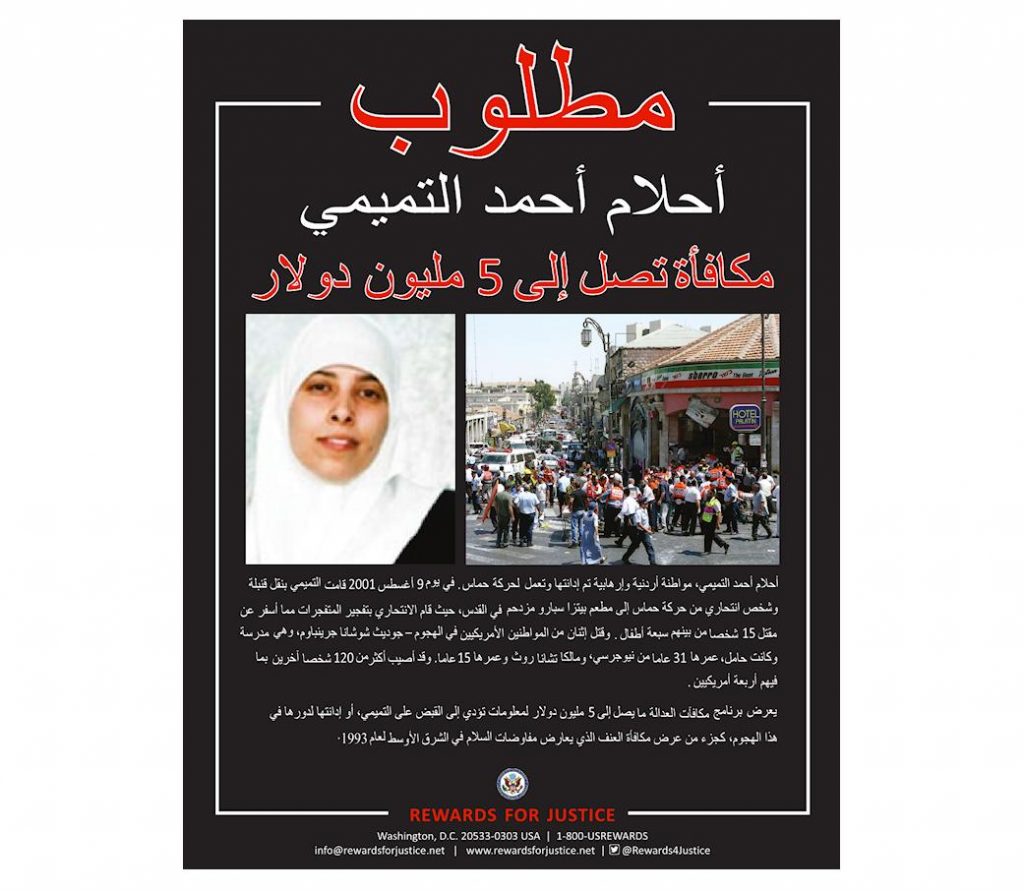 Maybe this will be the year the Savage of Sbarro is brought to justice in the U.S.

She, and those associating with her, should receive a visit from a drone.

Can’t she just “accidentally” kill herself while building a bomb? It seems that is all the rage these days over there, and it’s less politically messy……

Sodium metal in one or more of her orifices would be pretty entertaining.

why does the USA not withhold aide to Jordan until this fugitive from justice is remanded to our custody for trial ????