The fight for justice continues. 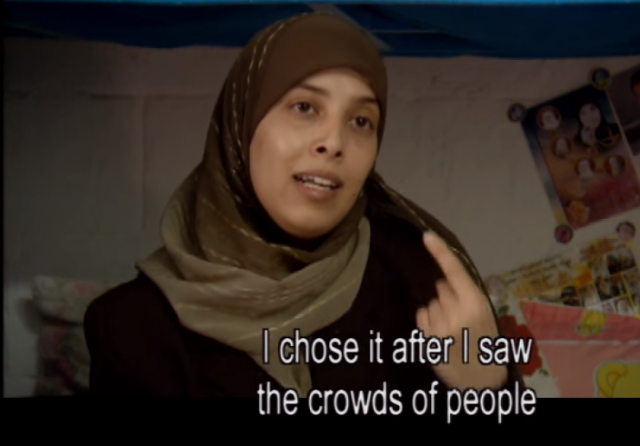 On this day back in 2001 a depraved woman—Ahlam Tamimi—delivered a human bomb to a packed downtown Jerusalem pizzeria at lunchtime, Never forget: Sbarro Pizzeria Massacre, Jerusalem, Aug. 9 2001.

Fifteen people, including two U.S. citizens, were murdered in this Hamas-orchestrated attack. 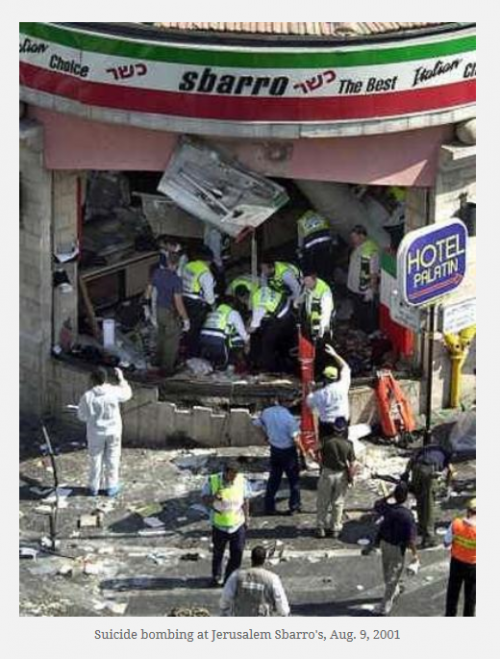 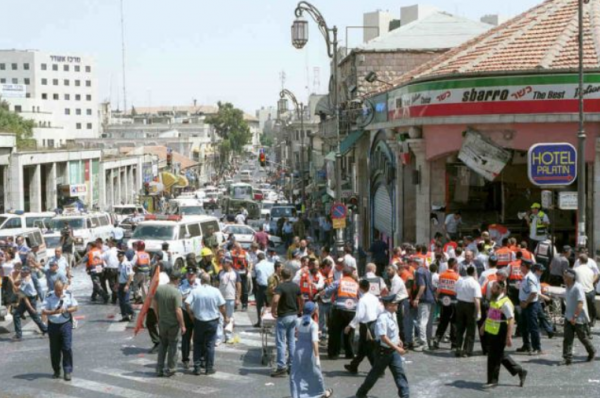 Sbarro minutes after the bombing | Credit: Times of Israel

In various interviews that she’s given over the years, Ahlam Tamimi—who masterminded the massacre—has admitted to choosing the popular Jerusalem restaurant for attack because it was full of families, and she also admits on video to being happy that so many children were killed. Here’s one such video, but many others are available online and are embedded in our prior post.

In a number of prior posts, we’ve written about this monstrous attack in the early years of the second intifada, a nearly six year wave of terror violence against Israeli civilians that resulted in the murder of over 1,000 innocent men, women and children.

We’ve also highlighted what has become a multi-year effort to bring Tamimi to American justice. Here are a few of our prior posts about this fight for justice (others can be found at this tag):

Basically, as we discussed in our posts, the problem is that Tamimi is now living in Jordan where she is adored and treated like a national hero. Her planning and participation in the heinous attack on Jerusalem’s Sbarro pizzeria in 2001 isn’t considered terrorism but a “heroic act of national armed struggle” for Palestinian self-determination, so that’s why she’s shielded by Jordan’s regime and its courts and is so admired in Jordan and celebrated across the Arab and Muslim world.

It’s also important to note that Ahlam Tamimi, a relative of Ahed Tamimi, is praised as a hero by her extended family and in her home village of Nabi Saleh in the West Bank, with whom international so-called human rights activists continue to visit in order to protest Israel’s ‘occupation’ and to oppose the security barrier constructed in response to the Sbarro and dozens of other terrorist attacks.

Ongoing Efforts to Bring the “Savage of Sbarro” to American Justice

Last month, during a short visit to Israel, I had the opportunity to meet with Arnold Roth, whose then fifteen-year-old daughter—Malki—was murdered in the Sbarro attack, This Year in Jerusalem: Kotel, Colleagues and Halva. 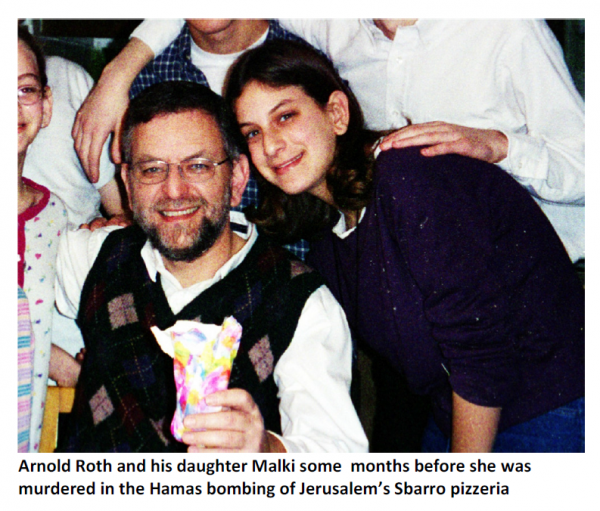 Malki was an American citizen and, as we detailed in our prior post, the U.S. Department of Justice could certainly prosecute her for the criminal murders of two Americans (and the wounding of other U.S. citizens) in the 2001 Sbarro terrorist attack. Given that Tamimi has repeatedly confessed to her crimes in taped interviews which she cannot claim were coerced or somehow forced by Israel, and is celebrating her terrorist actions in post-imprisonment media appearances, she’s virtually made an airtight case against herself. 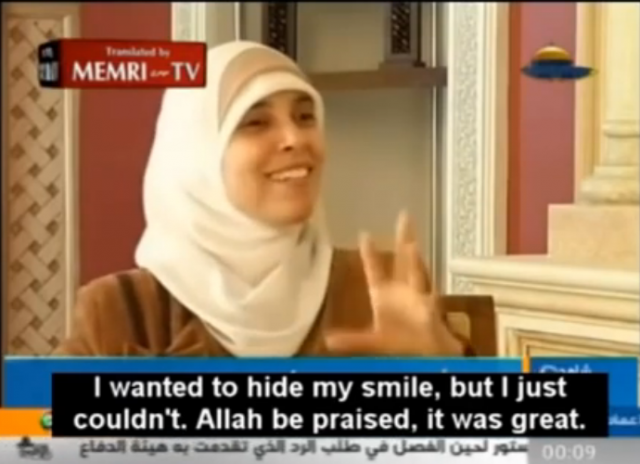 But Roth told me that at the moment his efforts to have Tamimi extradited to the U.S. have been stalled by a combination of factors, including

the U.S. government’s apparent unwillingness to pressure Jordan into extraditing, despite the fact that the arguments that Jordan has given for refusing the request are either “odd” or “not true”. 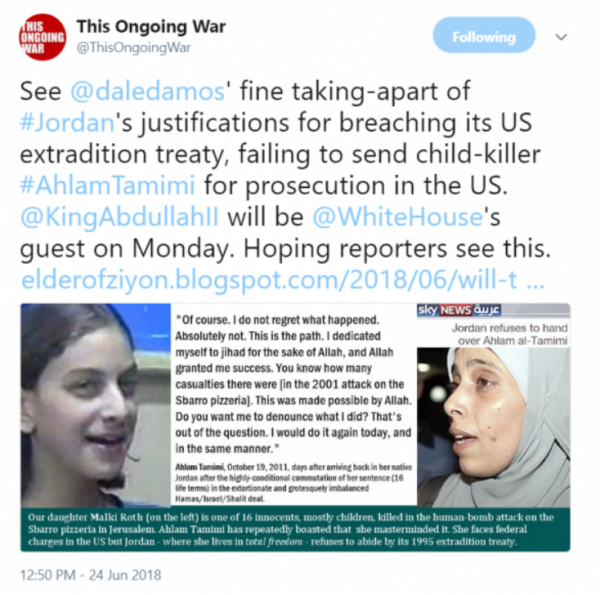 During our meeting, Roth’s frustration was palpable. As we noted in our prior posts, there’s now an unsealed 2013 U.S. criminal complaint against Tamimi, a $5M reward on her head and an FBI Most-Wanted-Terrorist poster in English and Arabic displayed at the U.S. Embassy in Amman. But Roth—the bereaved parent of a U.S. terror victim—isn’t convinced that there’s any actual policy to bring Tamimi to trial in the U.S. As I wrote in my prior post:

He told me that the government seems to just be ‘going through the motions’ of claiming that it wants to bring her to justice when the reality is that it has no real plan for doing so. He’s particularly baffled by all the stonewalling, the ‘mystifyingly slow decision-making’ and the unresponsiveness of relevant State Department officials.

His thinking is that the Justice Department and FBI are committed to getting justice for Malki and the other Americans killed and severely wounded in Tamimi’s mass murder and that the problem likely lies with other branches of the U.S. government. They’re reluctant to ‘annoy the Jordanian government’ and an important U.S. ally with multiple requests to have Tamimi taken into custody and to extradite her.”

My meeting with Roth last month in Jerusalem left me very sad and also furious at the same time by the obvious fact that politics is continuing to get in the way of justice and what U.S. law requires when Americans are harmed abroad in acts of terrorism.

Terrorists from around the world are routinely extradited to the U.S. to stand trial for attacks on Americans abroad. But Palestinians seems to be one class of killers that are immune from extradition. The grieving families of the nearly 70 U.S. citizens who have been killed since 1993 in attacks perpetrated by Palestinian terrorists in Israel and the disputed territories deserve better from the U.S. government—their pain is being compounded by the lack of justice coming from their own government.

But, as we noted in our prior post, there’s also another important reason not to let the Palestinian killers of Americans, like Ahlam Tamimi, escape justice to enjoy fame and good fortune: a failure to take any action against these murderers sends the wrong message to would-be terrorists around the globe and allows Palestinian governing authorities, and even allies like Jordan, to act disrespectfully toward the United States and the lives of her citizens. 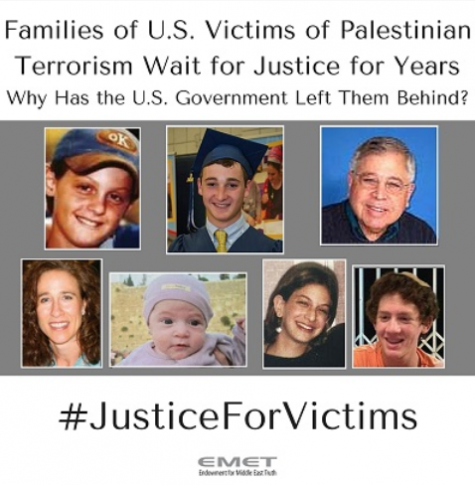 Bottom line: The reluctance to prosecute Tamimi and other Palestinian terrorists in U.S. courts of law for their crimes against Americans undermines U.S. national security. If Ahlam Tamimi continues to escape justice, there will undoubtedly be many more dead Americans.

It is long past time to shut down Murder, Inc.

For crying out loud, does the Mossad have to do everything?

Given the competence of our intel agencies, I guess so.

Why hasn’t she been terminated? Is it because of the Jordanian peace treaty. And, why hasn’t America either terminated her or snatched her and brought her back for trial, and hopefully execution.

She hasn’t been terminated because it’s not Israel’s general policy to kill people who pose no threat, just because once upon a time they committed a crime. Especially ones who’ve already been tried and sentenced, and were released by presidential pardon.

Israel terminates people who pose a threat to its security, and can’t be stopped any other way. She doesn’t.

They can honor the memory of these innocent Jews by nuking Gaza off the face of the earth.

Proximity to Israel, and desirability of reuse by Jews of Gaza, precludes use of nukes. Fuel-Air bombs would be better, in that they would wipe out clearly parasitic life and ready Gaza to become a productive place afterwards.

If … GWB had reponded with boldness and courage — alacrity and dispatch — against the murderers of Americans, Americans and Jews, in Israel on 8/9, I’m pretty sure that the God of Israel (and of everything else as well) would have cut 9/11 short.

I think the filthy bitch was released from an Israeli prison as part of the Gilad Schalit ransom.

Props to my Jewish friends, but this demonstrates the need for Christianity.

I am, at heart, a violent man. When I read about the Daesh butchers killed by a herd of wild boars…

…I took pleasure for a nanosecond until I reminded myself that if left to my own devices I would be among the worst of the worst. So I prayed for them. I’ve prayed for Muslims including terrorists countless times, mostly when they gave me a reason to hate them. Christ said that if we loved Him, we must keep His commandments. And He commanded us to pray for our enemies, to feed them if they are hungry, give them water if they are thirsty.

I will not say what flashes through my mind instinctively when i see this woman who is still walking around alive, bragging. I prayed that she might repent and come to God and I prayed that God protect my soul from the sin of hate.

That said, my religion wouldn’t prevent me one bit from being in on a kidnapping or targeted assassination of the woman. If the USG decided tomorrow that LCDR Arminius, USNR (Ret) had unique skills that they simply couldn’t do without (highly unlikely as i retired ten years ago) I’d be there in a heartbeat.

You know, the Pope doesn’t have a Swiss guard because they’re bunch of lightweights. Search on the arsenal the Vatican provides them and you’ll find it ain’t all halberds and funky metal hats and colorful period costumes. They’re as lethal as it is supposed to be.

I see no dichotomy between the fact that I will pray for a condemned killer to repent and that God show mercy on his/her soul when I play my role in execution.