The EU and green justice warriors will probably also be upset Poland is supporting Brexit and is a new home for US Air Force predator drone facilities. 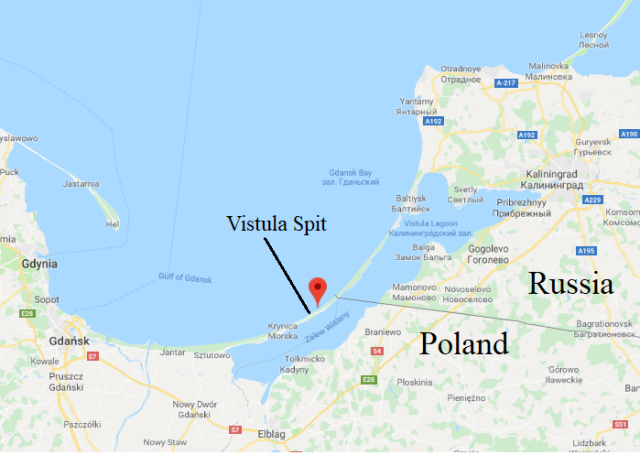 The last time we visited Poland, eco-activists were upset with its continued reliance on coal power.

The shrieks of green justice warriors will likely grow louder. Poland will continue with plans to dig a canal between its main eastern coastline and the Baltic Sea despite concerns among activists and in the European Union that it could damage the environment.

Currently, the only access to the lagoon from the Baltic Sea is a channel at the Russian end of the spit. Poland’s ruling Law and Justice Party (PiS), deeply distrustful of Russia, says a canal is needed for both security and economic reasons.

…Defending the project, which is estimated to cost 900 million zlotys ($237 million), Poland’s minister for maritime affairs, Marek Grobarczyk, said: “The first and basic reason for the construction … is a threat from the east.”

“This is the border of the EU, NATO, and above all of Poland, and it cannot really be controlled now because ships can only enter the Vistula Lagoon with Russia’s approval,” he said, adding that work would start in the second half of 2019.

Poland may be encouraging resistance to EU from others as well. The Poles are preparing to support the British should Brexit proceed without an EU blessing.

Poland’s government has agreed to a backup plan in case Britain crashes out of the European Union without an agreement.

The government said in a statement after its weekly Cabinet meeting Tuesday that it agreed to a draft bill that will protect the approximately 6,000 British citizens living in Poland who will lose their status as EU citizens.

It said they will be given 21 months — that is until Dec. 31, 2020 — to submit an application for residency status in Poland.

Finally, on March 1, US Air Forces in Europe has opened a new set of facilities at Miroslawiec Air Base in Poland to help accommodate the Air National Guardsmen and contractors operating predator drones (MQ-9 Reapers) there.

…Poland was chosen for the mission due to its “strategic location in Eastern Europe,” Auburn Davis, a civilian U.S. Air Forces in Europe official, told Air Force Times in May.

Air Forces in Europe has not provided many details regarding where the Reapers are flying.

Service officials have only said that the drones are providing intelligence, surveillance and reconnaissance in support of American foreign policy, as well as gathering force protection data for U.S. and international partners, according to an Air Forces Europe news release.

Happily, Poland seems to be making the decisions that best suit the Polish people. That should really unnerve the EU and green justice warriors.

Maybe some open borders idiots from Congress could go protest in Russia. See how far that gets them.

“Coastal Lagoon”? I know it’s probably just me, but I prefer my Lagoons to have Palm Trees on the beaches. I just can’t see sipping a Mai-Tai while lounging about on the frozen tundra.

The Panama canal would never have been able to be done today.

That list is a long one. The in-filling of Lower Manhattan particularly but also the coast lines of Brooklyn, Staten Island, similarly areas of New Jersey (even the created island on which the Statue of Liberty sits) would never the done today. This would apply to lots of American cities, Philly, Baltimore, New Orleans, including the general containment projects of the Mississippi River, plus numerous other river control efforts. The filling-in of Boston’s Back Bay, the creation/expansion of Boston’s Logan Airport, along with lots of other big city airports such as JFK/Idlewild, would never be built today. That would include all the launch facilities at Cape Carnival; virtually all naval and other military locations. As noted, the list of what couldn’t be build today is long.

And that’s just here. Would Panana, Suez be build? What about the Dutch successful efforts to tame the tides. So many examples could be given.

The left wants to de-modernize the world.

OTOH, DC would still be a real swamp, clearly more beneficial to the country than the current version.

Ironically, many of FDR’s CCC projects (such as the beautiful stone gorge trails in central New York) would have been stopped by environmentalists.

On a plus note, Pele recently said “FU” to the Left.

This is all about the zlotys.

Poland uses thee Vistula River to transport goods to and from the interior. The Vistula River empties out into the Vistula Lagoon, via the Elblad River, at the port city of Elblag. Elblag was a port with access to the Baltic Sea. However, tensions with Russia have seen a serious decline in traffic to Elblag, as vessels seeking to reach it, from the Baltic, have to enter the Lagoon in Russian territory. So, the proposed canal across the Vistula Spit is being constructed for exactly the same reasons that just about every other canal, from the Erie Canal to the Suez and Panama Canals have been constructed, economic profit.

Next thing you know, some of those profits will be feeding people…

Mac45, I think your own comment shows that it is not just about money. Stablesort has already pointed out that profits feed people. Russia is using its sovereignty over the Strait of Baltiysk to squeeze Poland economically and militarily.

No, the decision to construct the canal is ALL about money, as far as the Poles are concerned.

Russia has never been a trusted neighbor to Poland. Russia invaded Poland, TWICE during WWII; once with Germany in 1939 and later in the war when Russia was no longer allied with Germany. Now, as you noted, Russia has been using the Strait of Baltiysk to constrain traffic to Elblag, for political reasons. This negatively impacts the economics which drive the city. And, that is the overriding reason for the construction of the canal. Militarily, the canal serves no purpose, as it could be closed easily by the Russians, in time of war. The canal does not harm Russia, in any way. It only benefits the Polish city of Elblag.

While there is a political component to this, it is all about the economics of the city of Elblag.

Carry over from something the Poles learned in September 1939 from their neighbors. This time from the EU (stilled spelled G-E-R-M-A-N-Y) and the Federation.

Last hold out of Germans in WWII was right there. Russian never did take them. Had to go on land.
It is shame Russia has Prussia, a pure shame. Russians are pigs.

When finished, watch the LNG from the USA pour into Poland.