“They know because of our asylum laws, they step one foot on American soil, they are allowed in never to be heard from again.” 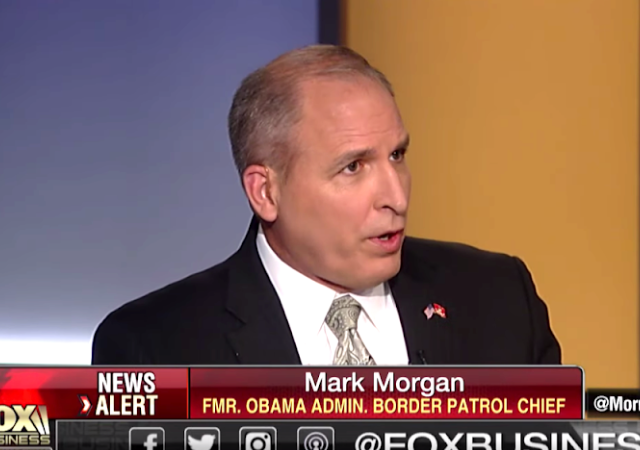 Mark Morgan, President Barack Obama’s Border Patrol chief, has come out again to speak about the the southern border. He said this morning the border crisis “is absolutely a national emergency.” From Fox Business:

“It’s absolutely a national emergency,” he said during an interview with Maria Bartiromo on “Mornings with Maria, Opens a New Window. ” referring to the U.S. Immigration and Customs Enforcements’ (ICE) release of hundreds of migrants detained at the U.S.-Mexico border because of overcrowding at detention facilities.

“ICE doesn’t have any more room,” he said. “Now border patrol agents are having to release illegal aliens into … the United States — they’re overwhelmed.”

In Morgan’s opinion, loopholes in asylum laws are largely to blame. He said in order to deal with the immediate crisis the government should revamp asylum laws to hold detainees in their country of origin until their claim can be heard.

“They know because of our asylum laws, they step one foot on American soil, they are allowed in never to be heard from again,” he said.

Earlier this month, Morgan claimed that President Donald Trump is right about the border crisis. He also criticized Democrats for “ignoring ‘overwhelming’ evidence that the U.S. immigration system is broken and something must be done to enhance border security.” From Fox News Insider:

He noted that Democrats grilled Homeland Security Secretary Kirstjen Nielsen during a House Homeland Security Committee Wednesday, but he said she was able to defend the Trump administration’s immigration policies with facts and figures.

According to U.S. Customs and Border Protection, more than 76,000 people tried to cross the U.S.-Mexico border in February, a “remarkable” leap and the highest number of any February in the past 12 years. Of those, 7,249 were unaccompanied children, and 40,385 were family units — totaling 60 percent of apprehensions.

Morgan also said that the Democratic talking point about detained migrant children being kept in cages is a “false narrative,” and he claimed liberal lawmakers are being driven by identity politics.

He said Congress could fix the majority of the issues at the border “in 15 minutes” if the two sides of the aisle worked together, but Democrats have been unwilling to do so in order to deny the president a political victory.

Morgan showed his support for Trump’s wall last month. He described the situation as a “national security and humanitarian crisis.” He explained to The Daily Wire why a wall would work:

That’s a good question, and I think that’s another reason why I decided to break my silence, because the rhetoric is really getting twisted, and it really confuses and misinforms the American people.

The answer is, “yeah,” but there’s a comma. So yes, the wall works. It’s not needed everywhere, but it is needed in strategic locations along the southwest border. And what do we mean by the wall? The border security experts will tell you that the wall in and of itself is not the solution. The wall is a critical element as part of a multilayer strategy of infrastructure, technology, and personnel. So yes, as part of that multilayer approach, the wall absolutely works and there’s historical data that can prove that. You can go to San Diego, Nogales, El Paso, anywhere where that multilayered approach has been used, where the wall is part of that, and illegal immigration has drastically reduced by around 90%, and overall crime in those areas has drastically reduced as well. It’s not hyperbole; it’s not driven by political ideology. That’s fact, and data can show that.

Morgan pointed out that if anyone spoke to the Yuma County Sheriff they’d learn that after a wall went up, illegal immigration “went down 90%, overall crime in his county went down drastically.”

It’s kind of weird that Morgan has appeared on Fox or spoken to conservative outlets. I wonder what’s the chance of him appearing on other networks and outlets on a regular basis?

It’s kind of weird that Morgan has appeared on Fox or spoken to conservative outlets. I wonder what’s the chance of him appearing on other networks and outlets on a regular basis?

Well, it happened one time that I could find, and it was awesome!!… Here ya go,

Every time I hear him speak I wonder again why Trump let him go.

He had 20 years LEO time with the FBI, if old enough that gets him a retirement and he was Deputy Assistant Director of the Inspection Division (Senior Executive Service I think). Moved from there to Customs and Border Protection (CBP) in 2014 as an Acting Assistant Commissioner. Back to the Bureau as Assistant Director of the Training Division and then Chief of the USBP in late 2016. He clashed with the union, and the union supported the President in the election. He was asked for his resignation “to show that the CBP and USBP were moving in a new direction.”

His retirement is sewed up nicely.

Hindsight is always better. And, maybe he will end up in the Trump administration.

I first saw him on Tucker, and that must have been a few months ago.

Then, recently some kind of add on tv. Good!

“They know because of our asylum laws, they step one foot on American soil, they are allowed in never to be heard from again,” he said.

Except when the Dems need enough votes to overturn an election, or when they get picked up for murder, rape, and child molestation.

in their own names, maybe. But once they’re living here they steal Americans’ identities or buy fake i.d.’s on the street and apply for welfare, food stamps, Medicaid, Supplemental Security Income, etc., and cost U.S. taxpayers hundreds of billions of dollars each year.

As usual, the rinos, never-Trumpers and socialist anti-Americans are at the heart of the travesty taking place at our doorstep.

I would like to see some information on those who are organizing and funding these caravans and such bringing so many to the US border. Without question much of this is being pushed and funded by Leftists who are purposely trying to create a crisis at our southern border. If American citizens are found to be supporting this effort, then could they be charged with RICO violations, treason, or anything else?

I suspect this is a Soros operation. He is another person who should be dealing with a special prosecutor.

Why the fuss? After all, our limousine socialists need their cheap[ nannies and gardeners.