Another anti-Semitic attack in Brooklyn ignored by the MSM. 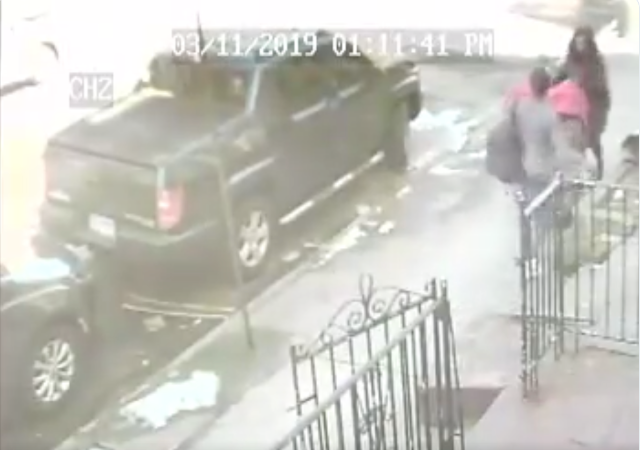 Last month, we told you about the latest, violent, anti-Semitic attacks in the Crown Heights section of Brooklyn.  Here’s a reminder of how bad it’s become there:

Some 10 people were violently attacked in the last 60 days alone,” noted Rabbi Yaacov Behrman, who heads the Crown Heights-based “Jewish Future Alliance,” in a statement on Wednesday.

Behrman continued: “We ask what is going wrong in Crown Heights, when innocent Jews are being beaten in the streets in 2019? Is there an atmosphere that is encouraging violence or antisemitism? And, an equally important question, where is the public outrage? Indeed, why isn’t this front page headlines?

On Monday, yet another Jewish resident of Crown Heights, along with her children, was attacked:

An African American male is seen walking down the street. Walking towards him is an Orthodox Jewish woman pushing a double carriage (with two children inside). In a totally unprovoked manner, the man does not walk to the side of the sidewalk, but instead walks into the carriage, lifts his foot and kicks the carriage.

The suspect nonchalantly walks away, without saying a word.

This latest attack was captured on camera:

As is usually the case, reports about the anti-Semitic incident has mainly come from Jewish media. A search of Google News comes up with one New York City television station covering the attack, but with this generic headline, “Man kicks stroller carrying 2 children.”

It’s pretty easy to imagine that if a white man kicked a stroller pushed by a Muslim woman wearing a hijab, the headline would contain much more detail.  It would also be nearly instant national news.

Brooklyn is shaping up to become on of the US’s first “No Go Zones”.

Along with the soon-to-be Caliphates of Michigan and Minnesota…

Bending over backwards to demonstrate how woke they are.

Wasn’t the meaning of Sturmabteilung (or Brownshirts) “assault division?”

And the Jewish people continue to do what?
— Talk & vote for Democrats who want to disarm them.

If the perpetrator used a gun, it would be all over the news… that would be a case for gun control. Hence the news about the Tree of Life Synagogue. But a random man practicing random acts of anti-semitism – “nothing to see here. Move along.”

No, I believe that many–maybe most–national news outlets would not cover it because they would fear that even if they ignored the racial motive behind the murder any coverage would lead to many more people learning eventually that this was a racist black-on-white crime–and that must not be reported.

At the end of the video, see her making a phone call. Hoping that will yield some results.

Kick my double stroller with my kids in it and I wouldn’t have been so graceful.

My thoughts exactly. A vicious beat down and curb stomping was in order here.

And after someone kicked this guys ass, he would end up in an ER where a Jewish doctor would take care of him. Oh my.

This is what happens when government at the highest levels fails to condemn such acts: local authorities fail to punish them, and the antisocial behavior escalates. So much for House Democrats condemning ‘all hatred.’ It becomes the same as condemning none of it.

Aspiring Nazies? The only way to handle this now is to put out decoys, and beat the living crap out of them. A few instances of SYG would also help, except in New York people are supposed to put up with this, no SYG.

So as an alternative, after beating them take or copy their IDs and then track down and beat the crap out of their relatives.

I make this suggestion because it is clear that Muslims and their enablers are behind terrorizing Jews. If they are allowed to get away with this stuff eventually they will be pulling similar crap on all of us.

This has nothing to do with Moslems. The perpetrators, when caught, are rarely Moslem. The only one I can think of is the car service driver in Borough Park a few months ago. Usually it’s just ordinary antisocial sometimes mentally disturbed black people.

Democrats have made the cynical (and correct) calculation that they will continue to keep the Jewish vote regardless of the overt and growing anti-semitism of their party.

Why would they NOT allow it? Jews haven’t started voting against them, and they’re a small group anyway.

Just like the black vote. Until and unless they actually demonstrate they’re willing to visit consequences on the Democrats for exploiting them, nothing will change.

They are not a small group in New York, just hopelessly leftist.

Um, we’re talking about areas where the Jews usually vote Republican in general elections. But the only real competition for their votes is in Dem primaries, so it doesn’t hurt them.

I have enjoyed keeping up with LI since its inception. I have never posted before today.

In watching this video, I don’t think this is a clear anti-Semitic incident. Watch as the guy walks down the sidewalk. It appears he is drifting toward the fence in an effort to avoid the stroller. Then it looks like the stroller is stuck or the caregiver stops it. In either case, what I see is that he kicks the stroller from annoyance to get it out of the way. Notice he keeps going.

This is still a terrible act given the children in the stroller and their caregiver.

I think we should have caution when using this term. It doesn’t appear to me, he showed any vitriol BECAUSE she was Jewish.

Even if this is true, there are lots of verified cases of Jews being attacked. Jews have huge social value, for much of the word there is none.

I must agree. The woman pushing the stroller rudely made no attempt to give room for the man to pass her, and how was this woman identified as Jewish? She just looked like a woman with kids to me.

Seems to me like the man was just frustrated at the stroller blocking his path, and he didn’t try to hit the woman or the kids when he kicked the stroller. That’s not a nice thing to do, and I don’t approve of him doing it, but I don’t see how this was anti-Semetic. As simplydifferent says, ‘he kept on going.’

If he had attacked the woman or the kids, which he didn’t do, I’d be more convinced of some kind of hatred instead of frustrated impatience at finding his path blocked.

Eskyman: Ummm she moved to the side and gave him the street side, putting the children as far away from any oncoming traffic as possible.

How was that rude? Anyone other than a triggered asshole would simply walka round.

While I agree with the question as to it being an Anti-semitic attack, we can’t see what is said and it looks like some words are exchanged to me, which could make the difference in that aspect.

However, yes he did attack the kids and woman. His kick was far from a gentle tap. It was hard enough to push the stroller back into her midsection and cause the stroller to violently wobble and shake the kids around. That is an attack, regardless of the reason.

It may not be because she is Jewish, but it is clearly, evil.

Let’s just call it out for that…there’s plenty of available sidewalk for an able-bodied individual.

Like I said below, how can the MSM condemn a dollar sign as anti-semitic and not this? They set the bar low.

In this instance, the animal kicking the infants would likely know that a white woman in this neighborhood (Crown Heights) was Jewish. Just about EVERY white person in Crown Heights is an orthodox Jew; few non-white wheel their baby carriages around town to see the sights of Crown Heights. Further woman in the video was wearing a big common to Jewish orthodoxy.

The diversity of Crown Heights:

What we do know so far, is that the animal in the video isn’t Al Sharpton, Ilhan Omar, Rashida Tlaib or Le Bron James. At least not at this point.

In that area, white is almost synonymous with Jewish. Less so than it used to be, but still predominantly so. And you can tell the Jews by their dress.

Still, I don’t know whether this, and most similar crimes, are antisemitic or anti-white. I’m not sure even the perpetrators have it clear in their own minds. Not that it matters.

Colin Flaherty has 1000s of videos on stuff like this.

Yeah, this isn’t important bigotry. Don’t you know? A dollar sign is REAL anti-semitism, especially when directed at a JINO like Tom $teyer.

Steyer is not even a JIN.

Punks like this will continue to act like this until it widely known that to do these things is much more painful than just leaving others alone.

I had a friend recently who opined that the reason there was so much rudeness in society these days is that people don’t get punched in the face for being buttheads nearly enough anymore.

Doesn’t look to be anti-Semitic. Rude, lazy, classless, entitled, and brutish, yes. Too lazy to walk to his left around the stroller. The lady should have maneuvered to her right, to get the stroller and herself out of his path. But the was on her phone, and had a double-stroller, so he should have been gentlemanly and walked areound her.

It’s less likely an instance of anti-Semitism, and more likely a case of anti-White racism, and certainly an example of laziness and boorishness.

Imagine if this poor woman had been wearing a MAGA hat at the time.

I was driving home from work one night, and it was a little after midnight. I was waiting at the light on Wilshire Blvd. just a block away from our apartment. A Jewish man wearing a yarmulke and pushing a baby stroller crossed right in front of my car in the crosswalk.

Immediately I got a sense of unease. I thought to myself, “What is he doing out at this time of night with his baby? And wearing a yarmulke!! There is nobody around. He and the baby are potential targets.”

That all transpired automatically in just a second or two in my head before I came to my senses and realized this was the very safe Westside of L.A.

But it still made me somewhat nervous.

His actions are despicable. Must’ve been scary for her, wondering if he was going to physically assault her and her baby. Hope the security cameras were able to get some good photos of him, along with The one she took with her phone.