Rabbi Yaacov Behrman: “And, an equally important question, where is the public outrage? Indeed, why isn’t this front page headlines?” 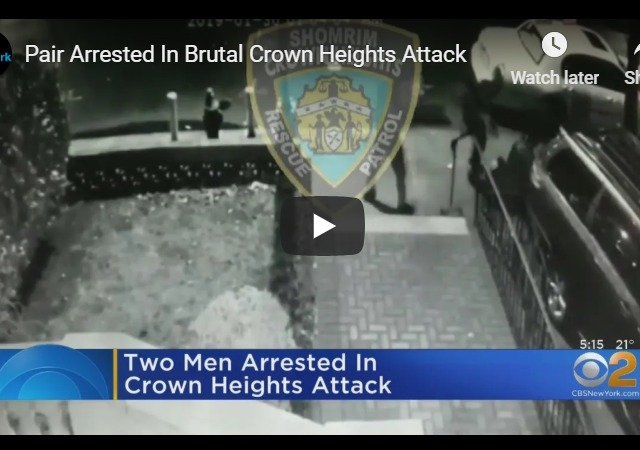 The MSM continues its silence on the growing attacks on Jews in Brooklyn. Even with video, these attacks mostly remain a local New York City story. Even the local NYC media doesn’t cover attack, which leaves it up to the Jewish media.

I tweeted about one such story on January 15th.

WABC-TV in New York reported on the latest attack on a Jewish person in Brooklyn:

Two men are under arrest and another is still on the loose after police say they attacked an Orthodox Jewish man in Brooklyn early Wednesday morning.

Police have charged Walters and Bannister with assault as a hate crime.

WCBS-TV has video of the attack:

The New York Post has details of a second attack by the same two men:

“It was just after 1 a.m.,” recalled the 22-year-old victim, Mendel, who spoke to The Post and asked that only his first name be published. “I was talking on the phone with my father in Australia on President Street — really in the heart of Crown Heights — when suddenly, from behind me out of nowhere, I just got punched in the face really, really hard.”

The young yeshiva student, who was born in Australia, said the attack left him stunned.

“They didn’t say anything at all,” Mendel remembered. “Next thing I know, I was on the floor — my yarmulke and glasses in the gutter somewhere.”

Cops have charged two men — Nazar Walters, 18, and Teshon Bannister, 21 — with assault and hate crimes in connection with both incidents. They’re looking for at least one more person who allegedly took part.

‘This happened last night in Crown Heights, not in Charlottesville nor at the hands of White Supremacists.’ Mendel told The Post that the trio didn’t even try to take anything from him after the sucker-punch.

“It was just an attack of hate and anti-Semitism,” he said. “I guess ’cause I look identifiably Jewish.”

Rabbi Yaacov Behrman reminds us of the scope of attacks in Brooklyn, telling Algemeiner:

“Some 10 people were violently attacked in the last 60 days alone,” noted Rabbi Yaacov Behrman, who heads the Crown Heights-based “Jewish Future Alliance,” in a statement on Wednesday.

Behrman continued: “We ask what is going wrong in Crown Heights, when innocent Jews are being beaten in the streets in 2019? Is there an atmosphere that is encouraging violence or antisemitism? And, an equally important question, where is the public outrage? Indeed, why isn’t this front page headlines?”

The rabbi is right. There is little outrage outside of the Jewish community, and there are no front page headlines. Compare this to the alleged racist and homophobic attack in Chicago on one of the stars of the show Empire. Even with no video, it remains a top news story and national trending topic on social media. Senators Kamala Harris and Cory Booker have called the alleged attack a “lynching.” People are decrying “Trump’s America!”

None of these attacks on Jewish people in Brooklyn were committed by white people or white supremacists. The attacks have all been committed by black and Muslim men. So whose America is that?

Is It Safe to Be Jewish in New York? https://t.co/hdl0ys8oqI #AntiSemitism (via @nytimes)

"During the past 22 months, not one person caught or identified as the aggressor in an anti-Semitic hate crime has been associated with a far right-wing group" https://t.co/s8fST2Tadv

If the perps had worn MAGA hats it would be prime-time news.

That is not far down the road, soon they will need to fake MAGA assaults to get what they want!

That is not far down the road, soon they will MAKE MAGA assaults to get what they want!

It is indeed sad that this is not receiving the attention it deserves, much like the inner city gang violence in Chicago and it’s death toll routinely gets ignored. I do wonder though if in the case of 22 year old Mendel if it was antisemitism that was the motivator or if Mendel was just another victim of the Knockout game that has unfortunately become popular with some of these kids/young adults. Either was it’s still vile that he was attacked like that.

“It is indeed sad that this is not receiving the attention it deserves,”

And don’t forget all the rapes. I wonder how many of those leave the woman with either STDs or a pregnancy. Surely those women deserve the right to abort both the perp and his spawn.

Given he is an Orthodox Jew, there could have been no doubt that he was Jewish.

Forgot to add that if the NYPD charged the two arrestees with a “hate crime”, you can bet it wasn’t just another “knockout game” assault (is that still a thing??).

You’re right, I hadn’t heard about these attacks. Meanwhile, the alleged attack in Chicago which is all over the news remains uncorroborated.

The Democratic Party was purchased, lock, stock, and barrel by CAIR and the Muslim Brotherhood somewhere about 2006. That was the year current Connecticut Governor, Ned Lamont (D), gave Conservative, patriotic, Israel supporting Democratic Senator from Connecticut Joe Lieberman his shove out of the party fold.
Couldn’t have a Jewish, Israel supporting Senator in their midst, the new owners couldn’t.

I have a theory that, if there was an assault, it was a domestic dispute and the MAGA was fabricated to cover-up the truth.

I just have a feeling…

The Chicago “Hate Crime” does not pass the smell test. That said, I am very unhappy with the way the Virtue Signaloti treat some hate crimes more equal than others. Lets ignore the NYC Jewish attacks yet lets have a complaint that could have been made by T-Bone hit all the stars and politicians because the right boxes were checked: Minority, Orientation, Fame…..

Oops…I left out the context of the attack in Chicago! =)

Serious question: are these attacks being ignored because the victims are Jewish or because the perps are black? This is very confusing and my victimology chart doesn’t help when both sides of the equation have to be considered.

Both are probably cause to allow it to slide.

It’s not just Jews who are being sucker punched by blacks, it is any whites, and the attackers are trying to inflict permanent damage. It happed to my 115# niece, knocked flat out, also in NYC.

I blame the Occasional Cortex….