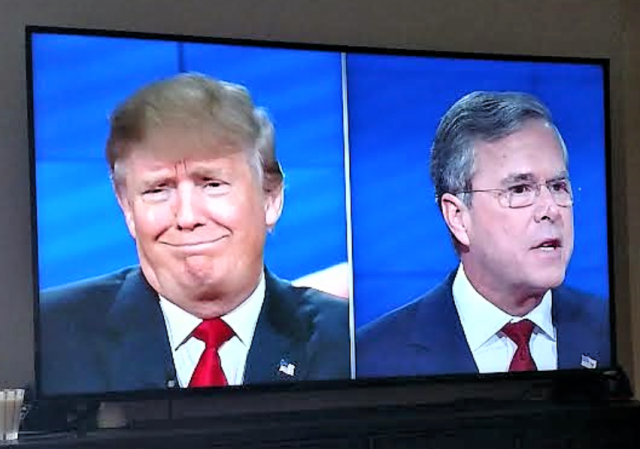 Jeb’s reasoning, apparently, is that only by running a GOP challenge to the sitting and duly-elected president can the GOP have a “conversation about what it is to be a conservative.”

President Trump’s former primary rival Jeb Bush called on a Republican candidate to challenge the president in the 2020 GOP nomination because the party “ought to be a given a choice.”

“I think someone should run. Just because Republicans ought to be given a choice,” said Bush in an interview with former Obama adviser David Axelrod, which is set to air Saturday on CNN.

Bush, who served as Florida’s governor from 1999-2007, acknowledged a Republican opponent’s chances of beating Trump in 2020 will be an uphill climb because “he has a strong, loyal base.”

“It’s hard to beat a sitting president,” he said. “But to have a conversation about what it is to be a conservative I think is important.”

Bush made the comments as he was discussing Maryland Republican Gov. Larry Hogan, a potential Trump challenger, according to CNN. Hogan is heading to New Hampshire in late April. The state is a must-stop for presidential candidates because it holds the first primary in the nation.

Given that the GOP is having and has been having that conversation since candidate Trump started winning GOP primary votes across the nation in 2016, Jeb’s reasoning falls short.  It’s also a bit off-note for someone who declared in 2012 that he “used to be a conservative.”

How can someone who “used to be a conservative” feel comfortable advocating a primary challenge to a sitting president of his own party . . . to spark a national conversation about what it means to be something he has acknowledged he no longer is?  Mind-boggling.

Furthermore, Hogan has next to zero name recognition and registers nowhere as a potential GOP primary favorite for 2020, Jeb(!) undoubtedly thinks he should be the one to challenge President Trump.

Watch the discussion on Fox Business:

Is he waiting in the wings to be called to duty by a desperate GOP . . . sort of like Michelle Obama but without the indifference of the potential candidate or the avid support of the party’s base?

What positions would this GOP “conservative” in Jeb’s eyes? Most people care about economy, jobs, health care, and the border typically in that order. Not sure how someone makes themselves look different. Unless they follow the Kristol and Max Boot path and show true colors of being a big government progressive.

Great idea Jeb. But, where could we find a Low Energy, Deep State Rino who wants to run? Where?

What’s this, a veiled appeal in an attempt to garner support for him to do so?

I seem to recall a foul, internet acronym out there for guys like Jeb.

Starts with the letter T, maybe? Has a U in there. I think a F? Pretty sure the last one is a S. I’m probably wrong on the order but someone could help me.

Jeb doing an interview with democrat party hatchet-man Axelrod. Now that’s revealing in of itself. Axelrod is the guy that smeared RINO Romney back in 2012 for being too conservative. Smearing Romney for being too right wing is like saying cold, unsweetened oatmeal served with orange juice made from concentrate is a daring breakfast option.

How is it that high profile boot-licking republican grovelers always find their way to CNN studios.

Obama’s brother asks if moooochelle is a man:

The “conversation”:
GOPe to base: Let’s talk about “true” conservatism.
Base to GOPe: You’re fired.

Seriously, the self-delusion of these elites from the BushClinton party two plus years on. They need to self-reflect a little bit before telling anyone else what to do.

Even if their goal is just to weaken and sabotage Trump – which I believe this is his real goal and it is nothing more than an immature butt hurt revenge fantasy from a properly spanked low-energy candidate – as a strategy it is so out of touch with anything that might work that it says they have learned nothing from the last $100mm he burnt up in vain.

If anyone wants to invest $100mm in me, I promise a much better return than Jeb.

I’m willing to give a thumbs up, but absolutely no money!

Jeb is completely out of touch. The 2016 GOP primaries were rigged for Jeb to win. Problem is, they were betting that Cruz would be their Barry Sanders but it turned out to be Trump who put the Bush/Clinton kabuki show out of business permanently.

Who does he imagine he is appealing to? Even the NeverTrumpers hate the Bushes. Democrats? No one. He is doing what all of the big name 2017 losers are doing, staying in the conversation hoping for a brokered convention. He and Romney want the red carpet invite. Epic disconnect.

Somebody please talk to me, it is so lonely being at the bottom.

If all jebbie wants is a conversation, why doesn’t he act as the challenger? Oh, right. Because he’s afraid.

#NeverTrumpers really need to kill themselves already. No, there is no forgiveness.

The establishment already has many candidates that are running against the people’s choice.

It’s tough being Jeb—out-conservatived by a guy who’s never even claimed to be a conservative. Ouch.

Well the Bushes CIA backers have turn their support towards the Dems and Obama. Why would they change back to Bushes now. Maybe Mitt told him to do this. Bush and EggHead for 2020.

What “Bushes’ CIA backers”? This is a left-wing fantasy. The CIA has always been solidly in the hands of the Democrats, and actively worked to undermine R presidencies, especially that of GWB.

Jeb!’s opinion is about as desirable as a fat person on a crowded subway in the middle of a heat wave.

Just outside of the leftist scum trying to destroy our country is the likes of this creep trying to enable them.

The entire GOPe wing of the party STILL can’t deal with the fact of a successful and feisty president who refuses to allow the Democrats and their stenographers in the media to smear him. We’ve had enough of these people, as Trump’s election and continuing great poll numbers prove.

I think Jeb Bush should Go. Away.

Low energy Jeb? Does he have the energy to run. Hw was the anointed one who was supposed to lose to Hillary Clinton. He had all the money and all the big money supporters and couldn’t get 5% of the voters. Nobody wants another Bush. Jeb. Time to move on.

¡Yeb! Didn’t they send him to a glue factory or something?