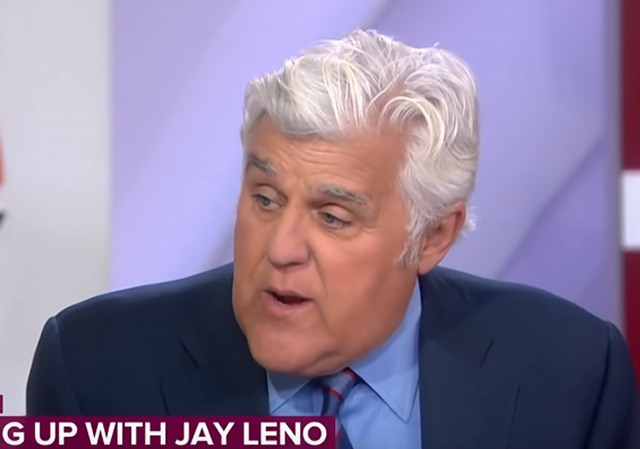 Former late night king Jay Leno expressed unhappiness about the direction the industry has taken in recent years. It’s good to know we’re not the only ones who have noticed that late night hosts now sound like a Greek chorus of progressive activists.

Joe Concha writes at The Hill:

Leno laments today’s late-night shows: ‘Everyone has to know your politics’

Former NBC “Tonight Show” host Jay Leno said Tuesday that he doesn’t miss hosting a late-night show and lamented that “everyone has to know your politics” now during an interview with NBC’s Al Roker on the third hour of the “Today” show.

“Do you miss being on the show, or is it such a different time that it would be hard to do?” “Today” host Roker asked Leno.

“No, it’s different. I don’t miss it. You know, everything now is, if people don’t like your politics, they — everyone has to know your politics,” Leno replied.

“I kind of used Johnny’s model. People couldn’t figure out. ‘Well, you and your Republican friends’ or ‘Well, Mr. Leno, you and your Democratic buddies.’ And I would get hate mail from both sides equally,” Leno said, referring to his predecessor at “The Tonight Show,” Johnny Carson.

This video is cued to start at the 3:34 mark, just press play:

“Jay Leno points out that comedy (on the very boring late night shows) is totally one-sided. It’s tough when there’s only one topic.” @foxandfriends Actually, the one-sided hatred on these shows is incredible and for me, unwatchable. But remember, WE are number one – President!

Leno is right but I would go even farther. I think this all began during the Obama presidency. After coming down so hard on George W. Bush for years, late night comics didn’t know what to do with Obama. Their instinct to speak truth to power was overcome by their love for Obama. The same thing happened with Saturday Night Live.

Then Trump was elected and it was as if every comedy host and writer in America suddenly remembered their sacred duty to ridicule the president whenever possible. The problem is that they seem to think no one remembers the Obama presidency as their eight year vacation.

Keep your chin up, Jay; you got yours.

He’s right. Hosts like Jimmy Kimmel and Stephen Colbert are sucking all of the fun out of late night comedy with their anti Trump posturing and political lectures.
Jimmy Fallon is trying to keep things light on the Tonight Show, but he probably gets a lot of pressure from NBC to be more political (Trump bashing).

How awkward was Trump’s appearance with Fallon?

No offense intended but I’ve never seen a face that looks more like a cartoon than Leno.

He always reminded me of the moon man from McDonald’s big mac tonight commercials in the late 80’s.

I recall something about Leno backpedalling rather furiously after DJT’s tweet. If Trump agrees with him, then he—horrors!—must agree with Trump. Disaster! So obviously he has to reestablish his “Orange Man BAD” credentials; and he did, with the usual Leftoid stream-of-consciousness rubbish.

A little more neck meat on Jay, and he gets the Tip O’Neill role, hands down, in any movie.

(Who would play Reagan?)

Johnny Carson and crew had a certain we-ness about them missing from variety and comedy today. Through his antics and the guests on his show there was a reflection on life itself with all its vagaries. We could be funny; we could be serious. We could be silly and ridiculous, all the while laughing at ourselves. We were exposed to entertainers, music, comedy, and all sorts of talent. It might not be our “cup of tea,” yet Johnny helped us to appreciate talent regardless.

Today, well, I think many have little or no sense of humor. I came across this, stating what I think is the present situation. “I don’t have a sense of humor anymore. It’s literally just sarcasm and a general hate of the majority of the human population.”

Continual sarcasm over and against a majority of people is passed off as humor. Underlying it one can sense anger, even hate and t’aint no love of people forthcoming. There’s plenty that’s comical about life and the circumstances we humans place ourselves in. And, and, that we cannot see that racism, sexism, or any of the other -isms dominating the national conversation have nothing to do with them is sad and tragic. It’s just that we’re human and share many qualities that go with being so. Now, let me tell you the one about …

THIS! will never happen again:

Leno has been on “Last Man Standing” for the last two seasons which is a Hollyweird no no.

Simply the late night comedians trying to get the maximum use out of their Obama For America kneepads.

“You know you all love me” BHO to the gathered diners during one of the White House Correspondent’s Dinners.

While I was working one day Seth Meyers father came in to pick up something from the grill. I didn’t actually know it was him but a coworker pointed him out to me and exclaimed, oh look, there’s Seth Meyers dad, to which I loudly replied , hoping maybe he would hear me, who cares!! I never watch that lousy show. It’s not funny at all. Not sure if he heard me but the coworker was surprised that I wasn’t impressed.

Btw, I grew up watching Carson and there will never be another. Never.

And I’m old enough to remember the original – Steve Allen. It’s been downhill ever since.

It wasnt like jay didnt participate in America bashing when it first became fashionable in hollywood.

He could have taken a stand. He didnt.

But at least he’s doing more now than the likes of scum like paul ryan ever did for our country.

“I think this all began during the Obama presidency… [L]ate night comics didn’t know what to do with Obama. Their instinct to speak truth to power was overcome by their love for Obama.”

I disagree. I think this is much deeper than that. The problem, in my opinion, lies in our education system. For years, our institutions have taught young people that beliefs outside a rigid progressive framework are dangerous. We should not be surprised that a growing segment of young adults (a large portion of the both the audience and staff of these shows) believe that there is only one right way to think. These shows are just a symptom of a much greater problem.

Our leftist education system – wholly corrupt itself – has in turn corrupted young people: and the young people know it.

The deal is: act like an ass and a whore if you want, but vote democrat.