Is This a Joke? CNN Wins Walter Cronkite Award for Excellence in Television Political Journalism For Parkland Shooting Town Hall

Is This a Joke? CNN Wins Walter Cronkite Award for Excellence in Television Political Journalism For Parkland Shooting Town Hall 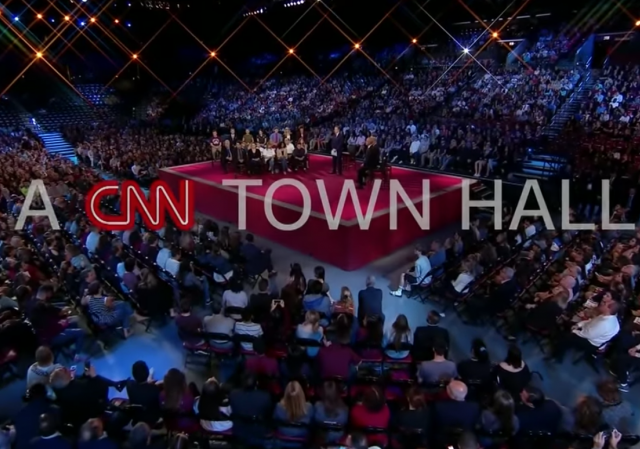 I suppose I shouldn’t be surprised that one of the most juvenile and narcissistic professions continues its rapid descent into complete parody, but here I am.

The entire spectacle, and that’s what it was, was little more than political propaganda and exploitation of traumatized adolescents to further a sad, pathetic, and anti-Constitutional agenda.

During the town hall, CNN gave airtime and a platform to now-disgraced Sheriff Israel, who was later forced out of his job. It was revealed after the fact, after he spent time on national cable news, that Israel knew Deputy Peterson did not enter the school during the shooting and instead, stayed outside during the massacre. But that was the least of the town hall’s issues.

Dana Loesch, spokeswoman for the NRA, who attended the town hall, was not pleased with the award announcement:

Here is some footage where people were yelling to burn me at CNN’s award-winning townhall where they “advanced the conversation on gun control.” pic.twitter.com/EYWWj8KcxN

I showed up in good faith for genuine conversation knowing that at best, it would be a tough event. The lengths @CNNPR went to inflame emotions & exploit pain to *put on a show* is inexcusable, shameful, & it’s grotesque they’re celebrating getting an “award” for their conduct.

Some interesting notes: CNN set this up like a WWE event. Purposefully. They allowed Scott Israel to take the stage before the cameras turned on and electioneer; he took that time (about 20 minutes) to start blaming law-abiding gun owners.

CNN is proud of this, their Cronkite Award™-winning townhall where they advanced the conversation on gun control. There is more video still. pic.twitter.com/Pk6xAZZ3co

This is what happened when the cameras turned off at @CNNPR ’s award-winning townhall. They’re proud of it. pic.twitter.com/pe8MWTfCqi

It’s not CNN who should be earning any kind of journalistic award for their dog and pony show, not even close. The Orlando Sun Sentinel, who we quoted extensively, worked tirelessly covering the Parkland shooting and through old fashioned shoe-leather journalism, is largely responsible for exposing the extent of corruption and neglect in almost every facet of the Parkland system.

Today's journalists believe their job is advancing preferred narratives regardless of the facts, not objectively covering events. Rewarding CNN for the Parkland town hall confirms this. https://t.co/0hNFfeGSyN

You can watch the town hall here, just be sure to have a barf bag handy:

Cronkite turned out to be a joke as a journalist, so it is an appropriate award.

After the pathetic modern-day Oscars, why not give CNN a Cronkite award? All that’s missing is Big Mike Obama’s ugly mug appearing in a cameo.

Yeah, I can picture CNN telling us that the total defeat of the Tet Offensive really meant that the Communists were winning. A very Cronkitish outfit.

A journalist’s definition of “excellence” is different from that of the average person. To a journalist, “excellence” means “really pushes the narrative”.

As far back as 1955, C.S. Lewis said that what we find in the newspapers is, “false in emphasis and interpretation, if not in fact as well,.”

If we had more reporters and fewer journalists, we’d all be better off.

Following the Tet Offensive, Walter Cronkite reported that it was an overwhelming defeat for the Viet Cong and NVA and a decisive victory for the RVN, US and allied troop. Then, he returned to New York, where he reported just the opposite. He later admitted that his reports from Vietnam were correct and accurate and that he changed them, upon returning to the states. In fact, his “editorial” on February 27, 1968 almost single-handedly caused the loss of the Vietnam War. The fine tradition that he established continue today, in the field of journalism.

“…almost single-handedly caused the loss of the Vietnam War”

Since the USA and RVN won the war (but lost the peace) I don’t think ‘Uncle Walt’ lost the war. The peace was lost by Democrats, as usual, when they abandoned the RVN to the aggression of the DRV and it’s allies.

After Tet, in ’68, the North was ready to sue for peace, even General Giap, who has acknowledged that fact publicly. But, because of the Cronkite statement, the US government went on hiatus, in Vietnam, and failed to press its advantage. This allowed the North to rebuild its military. LBJ was reported to have said that if they had lost Cronkite, they had lost the American people. Nixon continued the hiatus and eventually surrendered the South to the communists. This can all be traced directly to Uncle Walt’s Tet statement. It became a self fulfilling prophesy.

We like to say that the US military did not lose the Vietnam War, it was the politicians. And to some degree this is true. But, the US government surrendered Vietnam after a victory which decimated the Viet Cong and severely crushed the NVA. What happened was analogous to the allies remaining on the beaches at Normandy, rather than striking inland.

It’s either the Cronkite award or the Peter Arnett award. Both were liars who made up the news and the award is being given to the perfect party!

I would suggest they change the name to the “Dan Rather Fake But True Award.”

I’ll paraphrase a quote I heard in my (long ago) youth…journalism “has become a caricature of its own self-image.”

Wait a minute: it appears that the “Cronkite Award” is issued by the USC Annenberg School of Communication & Journalism.” If the name “Annenberg” sounds familiar, you may recall the “Chicago Annenberg Challenge,” an “education reform group co-founded by Bill Ayers in 1995 and chaired by Barack Obama from 1995 to 1999.”

Those folks are so far out in Left-field, their opinions can’t be taken seriously.

Did it win for the most ridiculous and staged town hall meeting of the year?

The only award that needs to be made for journalism is to James O’Keefe. What O’keefe has accomplished with his Veritas organization is the stuff of which investigative reporting should be made of.

Cronkite was a disgusting cretin. I had him pegged while still in elementary school.

The main organ grinders of the left are particularly clever in this regard: they sure know how to keep their monkeys dancing in a circle.

So, the award must have been in the “Propaganda” division.

another “award” goes down the tubes, joins nobel peace award, emmies, and oscars. not worth the paper they are written on

I should ask a friend, who was a Party member in the USSR in the media, about the awards granted to Pravda and Izvestia scribblers by the Party. This one sounds similar.

Exactly! The USSR is coming back!

It’s a typo. They meant the “Walter Duranty Award”

That CNN won an award for the town hall just proves how imbecilic it was; like Shepard Smith winning an award for being on FOX. Must have made FOX’s other liberal anchor Chris Wallace mad for being overlooked. Although, if the stories are true about Bret Bair getting Jeanine Pirro kicked off so he could make points with Ilhan Omar are true, maybe Bret’s trying to get into the running as well.

Bottom line: beware supposed news shows that get journalistic awards. It’s like Peace Prize awards for people who do nothing.

Well, Green Day has won a Grammy, and Gaddafi and Obama both have Nobel prizes, so there’s that.

Trust in the media is at an all time low. Let them pat each other on the back. These awards are meaningless.

As a number of , commentators have pointed out, Cronkite was a fraud who played a large role in the victory of the Viet Song. I would simply point out that most of. the self-proclaimed
arbiters of the journalist “excellence”–such as Columbia’s PEW-litzer School of Journalism are
cast-offs from the ScumbagSulzberger New York False Times.

Cronkite was a liar and a shill for the demonrats.