Elizabeth Warren warns on fundraising: “we’re a little behind where we hoped to be”

Elizabeth Warren warns on fundraising: “we’re a little behind where we hoped to be”

For real, or just a fake scare tactic to squeeze more money out of her supporters, so she later can claim fundraising success?

Elizabeth Warren has tried desperately to keep herself in the news cycle, as newcomers like Beto, and possible contenders like Joe Biden, dominate the campaign coverage. Even fresh-face “Mayor Pete” is getting better coverage than Warren.

Warren’s tactic is to roll out every couple of days a big, nation-changing plan, like breaking up big tech. It doesn’t seem to have helped her at all in the polls, where she is unable to break out of the single-digit pack.

One measure of momentum is fundraising, where Beto and Bernie have trounced everyone else. Democrats and the media want someone who can beat Trump, and the ability to raise funds from large numbers of small donors is a proxy for the ability to motivate the base.

If Warren is going to break out of the pack, she’s going to have to prove, or at least create the impression, that there is a groundswell of ‘grassroots’ donors behind her.

That pressure may explain why Warren’s email fundraising pitches have become more and more frantic the past couple of weeks.

She’s using standard campaign gimmicks linked to her big policy announcement to build her email list, such as a Petition to release the Mueller report. Sign that petition, and you are likely to get bombarded with donation emails daily.

She’s practically begging for any donation, no matter how small, so she can run up her donor numbers. She’ll even give you a “limited-edition” Persist sticker if you are a first time donor: 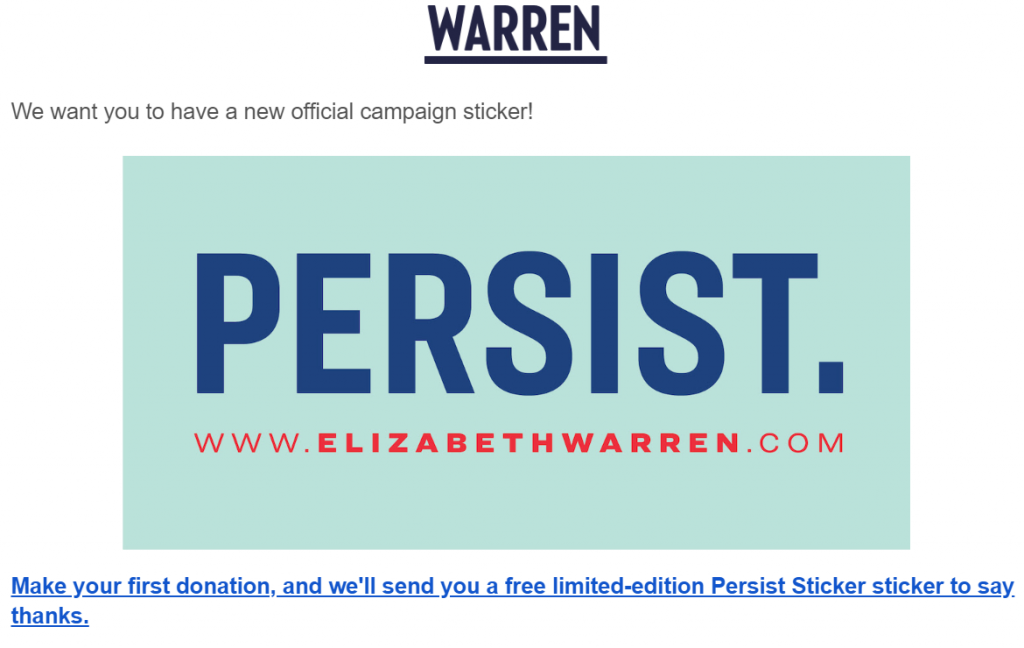 She’s warning that her fundraising will determine whether she can continue: 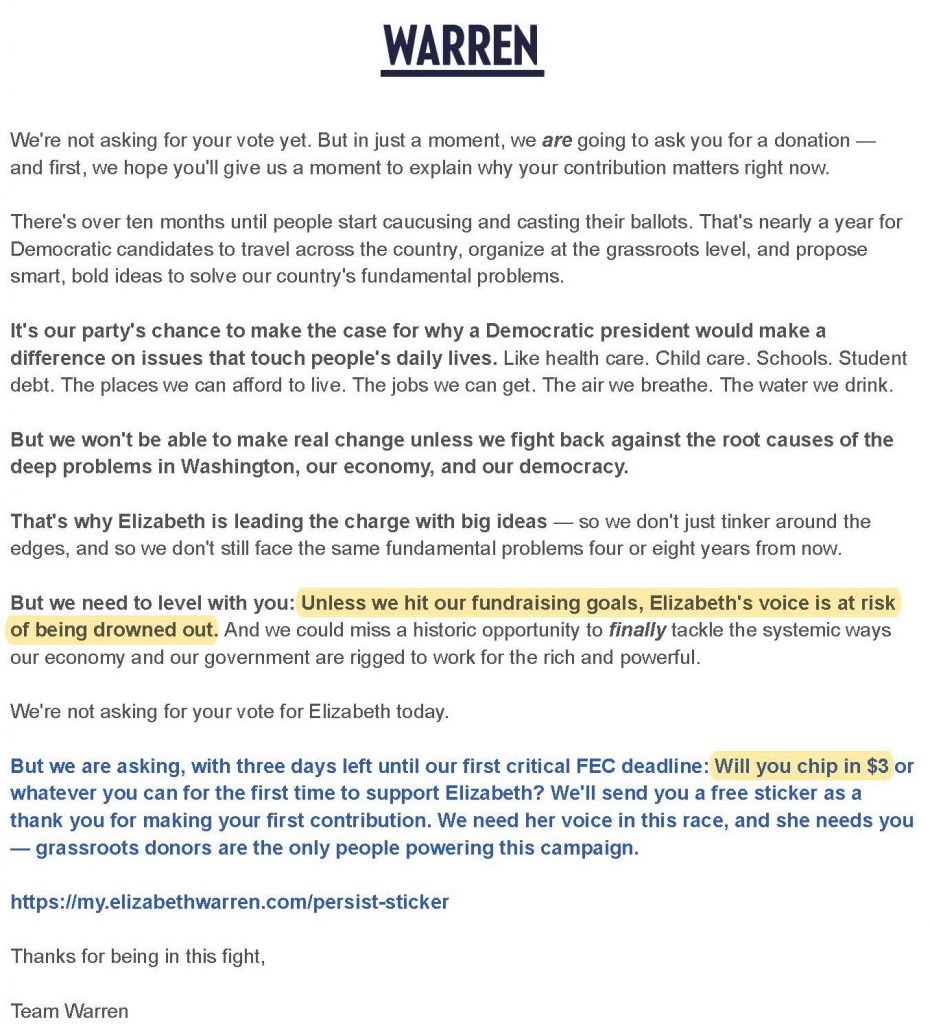 A March 29, 2019 email pitch warned that Warren was unlikely to meet her fundraising goals (emphasis in original):

We’re going to level with you: Elizabeth is going to get outraised this quarter.

Other candidates in this race have raised $6 million in a day, brought in $10 million in a week, and set goals of reaching a million contributions before Sunday. Those are some fundraising figures we won’t be able to match.

But here’s what else we know: While we might not be able to match those numbers, we have until Sunday to finish the quarter with the strongest showing possible. And that showing will power this grassroots campaign in the weeks and months ahead.

Supporters have been stepping up all week to help hit our goal of 25,000 new donations before Sunday, but we’re a little behind where we hoped to be.

As long as we hit our goal, we’ll have enough resources to keep building our grassroots movement. Can Elizabeth count on you to chip in $3 or whatever you can for the first time to help hit our goal before Sunday’s deadline?

Next month, reporters, pundits, and political analysts are going to try to use our public fundraising numbers to measure the strength of our grassroots campaign. We’ll be compared to other candidates in the race and what they’ve been able to bring in since announcing their campaigns for president.

That’s why it’s so important that you chip in today: Even if we’re outraised by other candidates, we’ll still be proud to tell the world that Elizabeth has a powerful grassroots team behind her — and we’re ready to fight.

We’re 84% of the way towards our goal of 25,000 new donations — and we still need 101 more contributions from New York to reach it and round out the quarter with the strongest number possible. Can Elizabeth count on you to be one of the 101?

Is Warren really going to fall short? Are her numbers going to be unimpressive compared to others?

This could all be a ruse designed for Warren to be able to declare unexpected victory when her numbers meet expectations — lower expectations so that you can exceed the lowered expectations. By her own email, her goal of 25,000 new donations is modest to begin with.

Or it may reflect a reality that Warren is yesterday’s news, someone stuck in the muck of her own false Native American history and unlikability.

There is an underlying truth to the real or feigned Warren campaign panic — if Warren’s First Quarter 2019 numbers disappoint, either absolutely or in comparison to others, it will be another major blow to her campaign.

na, she is just out front of the pack in the campaign to “get the money out of politics!”

Hmmm. What a conundrum. Do I believe (as usual) that Fauxcahontas is not telling the truth, and really has more money and recognition than a terrible human being like her deserves?

Or do I believe she really is behind on fund raising, and I’ll never have the joy of watching President Trump utterly humiliate her in the general?

No matter how I look at it, this is terrible news!

Take up skateboarding Liz, that’ll make you look cool and the young commies will love you. I promise.

That pile of wampum is just not growing fast enough for Fauxcahontas’s campaign to get off the ground. Which is a good thing.

That pile of wampum is just not growing fast enough for Fauxcahontas’s campaign to get off the ground. Which is a good thing.

A phrase like We’re going to level with you really shouldn’t appear in campaign literature for a Decepticon™ like Warren. That’s as bad as something like we need donations to keep our heads above water in a Ted Kennedy campaign, or the candidate extends a hand for Joe Biden.

She’s going to have to sell a lot of beaver pelts to catch up!

I’ll give her $5 if she grabs another beer, goes up to a cigar Indian and slaps it on the butt and posts it on Instagram.

Warren running low on funds underscores progressive Media power as democrat party king makers. They all wanted Bernie but settled for Hillary. They pulled the inverse of that stunt on Trump. Media used him as “clown posse” clickbait and excluded all the other candidates thinking at the last moment they could pull the rug from under Trumps feet. This time around they’re using social media deplatforming to squelch tepublicans and at the same time bolstering Bernie and Harris during the early run up. Warren has been locked out/embargoed. Plus, she’s a boor.

Which of those two have “whored” themselves out more?

I always thought President Coolidge looked rather fetching in his Lakota war bonnet.

But anything Cal did was cool.

notamemberofanyorganizedpolicital in reply to bobinreverse. | March 30, 2019 at 5:45 pm

How about she stop wasting Million$ on her fake face lifts….

Every time I see that mug, a pie in the face comes to mind.

Even fresh-face “Mayor Pete” is getting better coverage than Warren.
————————–
This is one dangerous guy. Has the same views as aoc but is way smoother and more likeable.
Snake charmers watch him for lessons. Warren is a joke compared to pete buttjudge.

Dem’s can’t spew the hatred and racism that they do and then have a white person run as their candidate. Even a woman. Warren is wasting her time.

Her campaign now is sort of like the economy would be if she were President – flat.

The reality is that her irritating, superior, lecturing school marm personality, telling everyone else how to live, wanting to control every detail of everyone else’s lives is just incredibly irritating.

Her campaign now is sort of like the economy would be if she were President – flat.

The reality is that her irritating, superior, lecturing school marm personality, telling everyone else how to live, wanting to control every detail of everyone else’s lives is just incredibly irritating.