As usual, there are one set of standards for Democrats, and another set for everyone else. 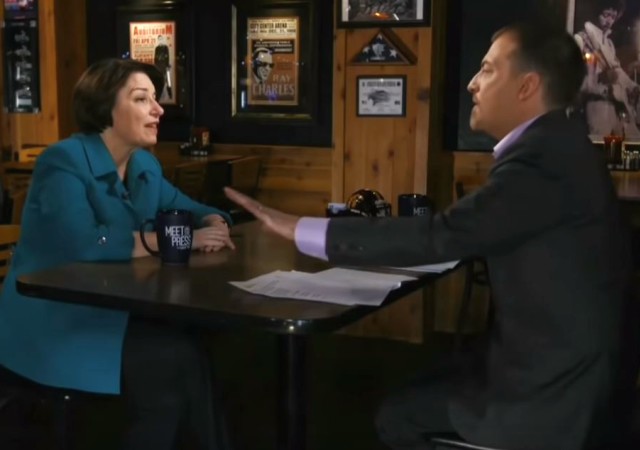 When it comes to addressing the lingering issue of Virginia Democratic Gov. Ralph Northam’s refusal to resign over a college blackface photo that surfaced last month, Sen. Amy Klobuchar (D-MN) would rather talk about… herself and Pres. Trump.
In a wide-ranging interview with Chuck Todd on NBC‘s “Meet the Press” Sunday, the 2020 presidential hopeful acknowledged it wasn’t a good look for the Democratic party for Northam to still be in office, but that she had done all she could do in calling for him to resign in the aftermath of the controversy:

Sen. Amy Klobuchar, Minnesota Democrat, said Sunday that “we have to move on” after being asked about Mr. Northam in an interview on NBC’s “Meet the Press.”

“Al Franken is not in the Senate and Ralph Northam is still governor of Virginia. What’s wrong with that picture to you?” asked moderator Chuck Todd.

Ms. Klobuchar pointed out that she called for the Democrat Northam to step down, which he has refused to do, after he admitted last month to donning blackface while in medical school for a dance contest, but denied wearing blackface or a Ku Klux Klan hood in a 1984 yearbook photo.

“If we spend our whole time, Chuck, talking about what men did wrong, we are never going to talk about what women can do right, including running for president and winning,” she said.

After Mr. Todd said that the Northam situation wasn’t a “great picture” for Democrats, Ms. Klobuchar replied, “It is not. But again, we have to move on,” before proceeding to criticize President Trump.

Watch video of the exchange between Klobuchar and Todd in the clip below:

As I wrote last month, polling numbers released just a few weeks after the blackface scandal first broke indicated that Northam was likely to successfully weather the storm, as was Democratic Attorney Gen. Mark Herring who also admitted to wearing blackface back in college. In fact, one of the polls showed that black voters more so than white voters did not want either of them to step down.

Klobuchar, to my knowledge, is the only Democratic presidential candidate who has been asked about Northam at this stage in the game and so far removed from when the scandal first broke. What this tells me is that not only have Virginians moved on, but so have Democrats, in general.

We know this would not be the case if Northam and Herring happened to be Republicans. There would be round the clock demonstrations and “sleep-ins” at the governor’s mansion, the cable news networks would still be broadcasting live from the scene, and the national conversation would still be ongoing about What This All Means for the future of America.

But, hey, if we’re going to use Klobuchar’s new rule of thumb when it comes to deciding when to move on (essentially: “I’ve done all I can do, they won’t do what they should, so let’s move on”), then I can think of another story the media and Democrats need to move on from: The Donald Trump/Russian collusion non-story.

Think about it: There’s more evidence that Northam appeared in blackface than there is of any alleged collusion between Trump and Russia. In fact, there’s no evidence in the latter case at all. Let the investigation continue, and let the chips fall where they may – if they even fall at all. But until then it’s time for the left and their media allies to, you know, move on.

Uh, no. Live by diversity, get judged by your color.

OK, Klobuchar is a Leftist. As is Northam. Y’all know that rules, laws, the Constitution, and moral standards do not apply to them. Ever. They, on the other hand can do anything to anyone. The trick now is that people are realizing that and are getting really tired of it. I expect that they will encounter an unforeseen and from their point of view unpleasant response soon.

Yea, but State of Washington voted to not include Trump on election ballot because he will not provide Tax Returns.

Not that he was going to get their electoral vote anyways.

Maybe we should make a law that if you have not filed a tax return you can not vote.

Yea, but State of Washington voted to not include Trump on election ballot because he will not provide Tax Returns.

The Supreme Court already ruled about 25 years ago that they can’t do that.

Maybe we should make a law that if you have not filed a tax return you can not vote.

A state could do that, so long as it doesn’t require any tax be paid.

That is what the Supreme Court said, but we also have laws against illegal immigration that are routinely ignored by blue cities and states (with no legal penalty whatsoever).

By the same token a blue state could decide to keep Trump off the ballot and make it stand if they found enough Federal judges to go along with it and if the Justice Department dragged its feet in bringing them to heel (after the Obamacare debacle I wouldn’t count on the Roberts court to do the right thing). My purely cynical non-lawyer opinion says that is probably what will happen.

(I upvoted you because you avatar is pretty cool)

A state could ban a citizen who didn’t file a tax return from voting? WHAT?? Try to require an id and all litigation hell breaks out and you think a tax filing qualification could pass muster? i will take any bet you care to offer on that, and give you 100 to 1 on any amount you suggest.

Is it time to move on from Fairfax’s scandal too?

Klobutcher loves her some KKK.

“Al Franken is not in the Senate and Ralph Northam is still governor of Virginia. What’s wrong with that picture to you?” asked moderator Chuck Todd.

Hardly comparable. Franken is a serial molester. Northam has either an obsolete sense of humor or very poor fashion sense.

The clueless republican party in VA has been unable to turn this to its advantage. Welcome to VA: where the dems are corrupt, the republicans are inept, and I’m going to have a drink … or 2 …or 3 … or

Good one: “White DEMOCRAT Privilege.” They have a long history of this. Robert “Sheets” Byrd, anyone? The self-appointed “Conscience of the Senate?”

Yes. It IS time to move on. I doubt there is a single one of you on here – and I am including myself – tht has not done something in the past that, today, would cause much hoo-hah, waving of arms in the air, and much tut-tut-ing.

Downtick me all you want.

What about infanticide? Should we move past that scandal too?

Painting your face black or wearing a hood may be in poor taste. And maybe he should step down as he holds an elected office. But it’s certainly not a crime and never should be.