No amount of pressure will make him step down. 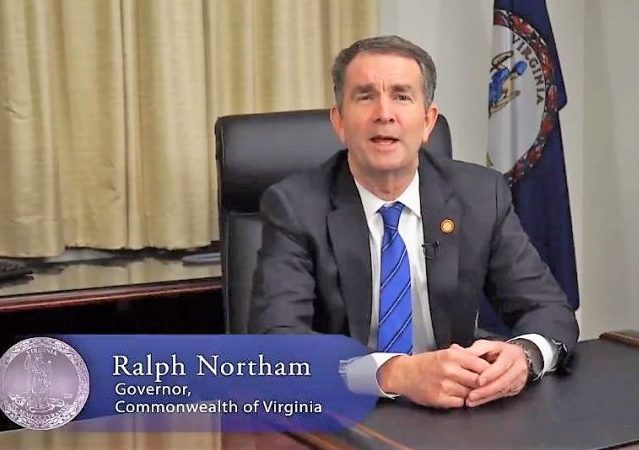 Virginia Gov. Ralph Northam has told his top staffers that he will not resign despite the amount pressure from other Democrats in light of racist yearbook photos. From The Associated Press:

A senior official in Virginia Gov. Ralph Northam’s administration says the governor has told his top staff that he does not plan to resign over a racist photo despite intense pressure to step down.

The official says Northam told his Cabinet during a Friday afternoon meeting that he intends to stay. The official was not authorized to discuss the matter publicly and spoke on condition of anonymity.

Northam has faced widespread calls to step down over after his medical school yearbook page with a racist photo surfaced last week. It shows one person in blackface and another in a Ku Klux Klan robe and hood.

Northam sent this out to the employees: 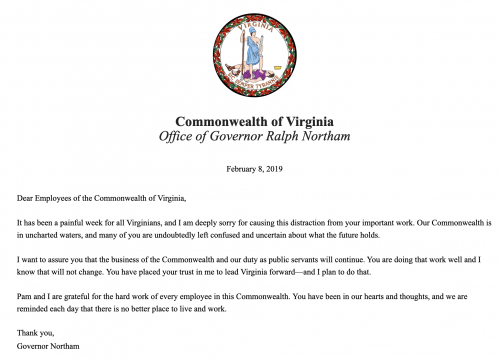 Then again, if Northam resigned, Lt. Gov. Justin Fairfax would take over. Two women have now accused Fairfax of rape.

He’s clever. All he has to do is sit tight and the Democrat media will quickly move on to other things.

Being a Democrat means never having to face any consequences.

notamemberofanyorganizedpolicital in reply to mailman. | February 8, 2019 at 5:08 pm

JusticeDelivered in reply to notamemberofanyorganizedpolicital. | February 8, 2019 at 5:13 pm

all three faces in this were blackface, two painted, one by birth.

notamemberofanyorganizedpolicital in reply to JusticeDelivered. | February 8, 2019 at 5:43 pm

Oh, and let’s not forget the White Sheets as the Wymen of the Democrat Party so amply demonstrated Tuesday night.

fscarn in reply to notamemberofanyorganizedpolicital. | February 8, 2019 at 7:13 pm

Not true for Fairfax, I don’t see how he survives this.

The media will stop reporting on VA and begin to write about rain in Seattle.

notamemberofanyorganizedpolicital in reply to Anchovy. | February 8, 2019 at 6:50 pm

If only. We’re having a rare snowstorm, which of course our local government is totally incapable of dealing with.

He’s just one more bad press conference away from another moonwalk.

Gee, what a surprise. It’s so easy being a Democrat. I think I might switch and make a big deal about my newfound, refreshing and proper, leftist politics and get rich and famous and powerful. At my apex, I’ll tell everyone that it was nothing but a ruse, they can all go to hell and I retire a billionaire.

Nothing too crazy in there, but I just forwarded you the email (to the legal insurrection contact email) I received from the governor’s office.

It does state that he won’t be resigning.

Why should he resign? This tempest has taken the Gov’s view on infanticide off the news. Also, maybe out of the 2020 election.

All in all, this is still pretty good. Political correctness takes a hit, there will probably be a new surge in use of blackface which is a legal form of speech, and bald faced black racism for political gain fails.

I don’t necessarily think this started specifically to assenate Northams political career, but chatter on numerous black dominated forums made it very clear that it had turned into a racism driven attempt to put Fairfax in the governor’s seat.

Now Fairfax is going down and Northam will likely stay. Unintended consequences are really quite entertaining.

When Northam comes up for reelection, he will likely be shot down, and that means there is a better opportunity for a republican to take the position.

When Northam comes up for reelection

He can’t run for reelection. Staying in office means (yet again) the (D)s gets away with anything and everything and the (R)s do not.

Va. will turn red next election? No. The state is full of too many clowns who don’t care about standards.

Democrats über alles. Until someone stops them from setting the rules, they will continue to set the rules. No one stopped them this time.

Northern Virginia is mostly to blame. I wish we could lop that part off.

The Commonwealth of VA only allows a governor to be in office one term.

He won’t be running for re-election – at least, not for the governor’s seat.

Good. He can now be the official whipping boy for out dated youthful PC indiscretions.

Defending the freedom of speech right of blackface wearers is no hill to die on.

Would make for an interesting visual if his desk were covered with photos of those who did it were given a pass … Ted Danson, Joy Behar, etc.

CNN tracked down the editor of Northam’s yearbook. He said that all photos on one’s page are submitted by the student himself, in an envelope. Northam hasn’t explained how the photo got on his page

Why should he resign? The Democrats just had a radical racist, Stacy Abrams, deliver their response to the SOTU live on national television. The Dims love, and have always loved, their flaming bigots of all colors.

Just as I predicted.

Northam won’t resign. Fairfax won’t resign nor will he be investigated. The state AG has already vanished from what few news accounts reported on his blackface adventure.

To be a Democrat is to NEVER be held accountable.

If one or both of the women file charges, and he is prosecuted, he will not survive.

Young ladies decide, two babies for the check, gee babies are work, then abortions to avoid more work. The two welfare check babies are too much trouble, she doesn’t like to read, too lazy to nurture. 14-15-16 years later, the cycle repeats.

Or even fairly recent history.

Or perhaps some reasonable time ago.

Yearbooks, honestly? Really? Judging me by my yearbook would mean I’m some sort of trumpet player with long hair. (I miss my hair)

All three Democrats will get off unscathed. Double and Triple standards are the Democrat way; but there is the additional factor that if a Black Democrat LT. Gov. gets punished for committing felony sexual assault [two possible charges so far, and rumors of #’s 3 & 4 coming] and the two White Democrat politicians get off, there will be hell to pay. So all three will get off.

And it can be taken as a given that the Republican Party, both nationally and in Virginia will not object at all. It does say something that when the Democrats have the top three positions in the state government government’s chain of succession compromised, that they will ignore the state of compromise to keep #4 [a Republican] out of office regardless, and the Republicans will not fight a whit for what is both right and to their theoretical benefit.

We need a new political vehicle or to accept that electoral politics with functionally one party is tyranny, with all that implies if we are Americans.

Who are the two people in the photos? If the GOV wants to prove it isn’t him, then tell us who they are. Or better yet, maybe some journalist can get off their lazy A$$ and go digging to FIND OUT!!!! And what about his nickname, COON MAN? Have we lost our friggin minds here? A guy who has a nickname of COON MAN has a yearbook pic of a guy in blackface and another guy in a KKK sheet, and not even ONE journalist has figured out who the guys are and the origin of the nickname???????

What times we live in.

Considering how long it has been, who cares?

Also, it is most certainly likely that at least some pictures are put in wrong places.

The other thing is that blacks are constantly scheming to get things which are not earned. I am not bothered by their skin color in the least, I am tired of their endless propaganda.

Northam would have been forced by the Dems to resign in the name of ideological purity, except that his replacements were tainted as well. If Northam is forced out, then the AG, who admitted to blackface as well, would have to be forced out. The Lt. Governor has been accused of a felony, so there would be a real chance of the state falling into the Republicans’ hands. So the Dems had to do an about-face and back Northam.

There’s a very important distinction here that seems to be forgotten. Neither Northam nor the AG has been accused of any crime, so impeachment for “high crimes and misdemeanors” is out of the question. Blackface is a violation of political correctness, not a violation of any law. The Lt Governor has been accused of an actual felony. If the charges are shown to be true, then he will have to be impeached. The Dems can’t throw Northam under the bus under these circumstances.